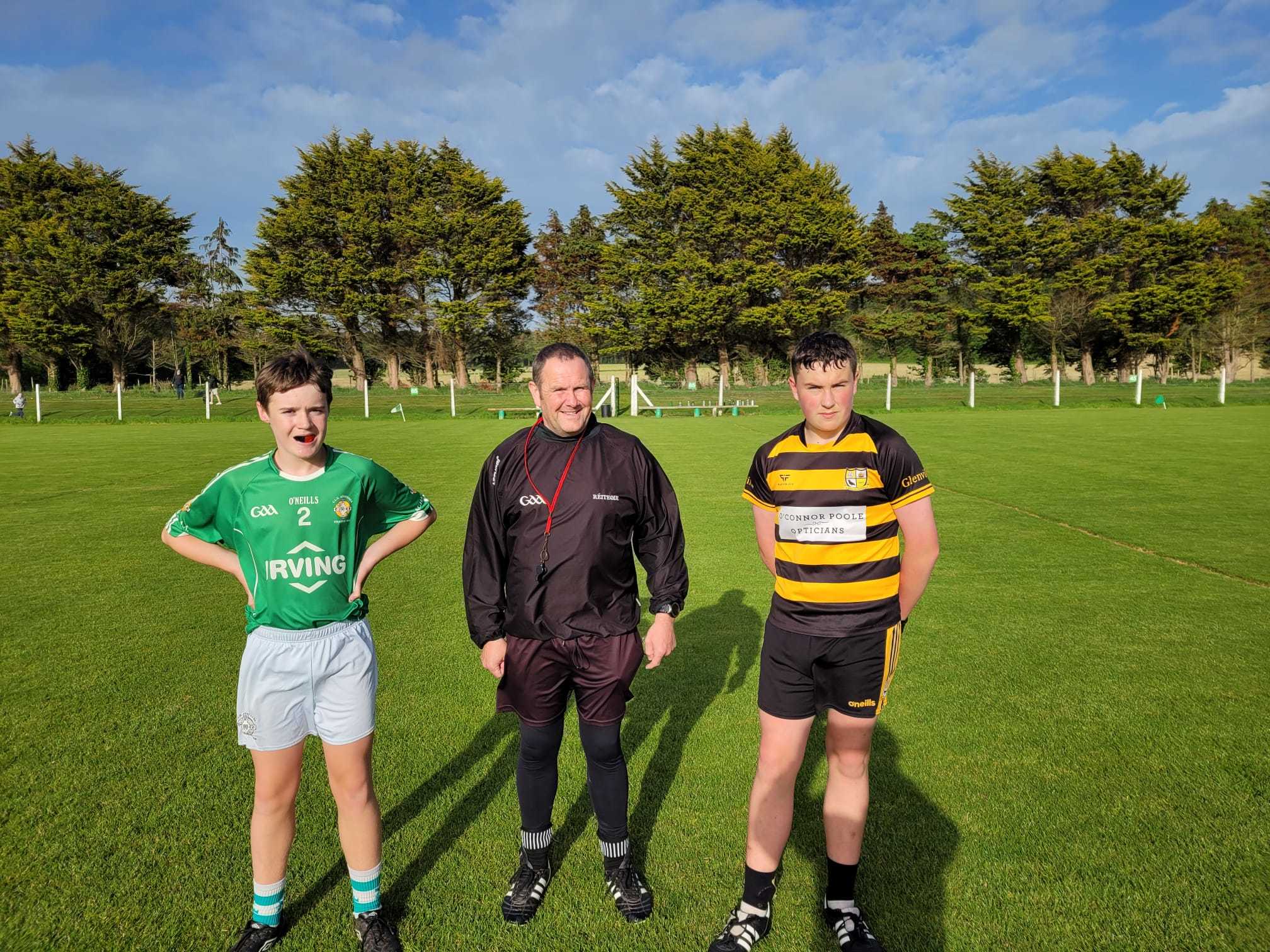 Aghada Juvenile GAA News
Hi folks hope all is well, the club would like to thank Bernard Alcock who has kindly sponsored a set of jerseys for our U9 team. Bernard who has been living in Boston for the last 30 years is a former player with the club who has never forgotten his native shore, born in Lower Aghada he always keeps up to date with the news from our parish, while also being a great source of information on times past. He is very involved in the Irish diaspora in Boston and is a great running enthusiast having run countless marathons over the years, although living abroad you would always hear him say “Aghada is the place I call home”.
Our U14 footballers were the first team into championship action this year as they took on Glenville in Rostellan last Wednesday night. The heavy showers that fell during the game did not dampen the spirits with our boys producing a fine brand of attacking football. One of those early attacks nearly produced a goal of real quality with Alex Buckley’s fine shot just shaving the post after a clever sideline ball into space from half back Adam Lewis had set him up nicely. Our first score of the game was a point from centre back Cillian Scanlon who crept forward to finish well. Glenville with the wind at their backs were creating chances but heroic defending from Jackson Kearns with some impressive blocks kept them at bay. Scores were hard to come by as our number 7 Max Daly had a piledriver blocked by the goalkeeper before we finally found the net with Jack Dorney shooting home after being expertly put in on goal by Cian Moore. We took our first half tally to 1-2 with another Cillian Scanlon point as Glenville used the wind well to bring their first half total to 5 points to level the match at the short whistle as remarkably, they would fail to score again for the remainder of the game as the boys in green took total control. We came out in the second half in a determined mood, a cohesive unit in attack and defence and when full forward Cian Moore struck a ferocious ground shot to the net we were on our way as the scores began to flow. Alex B, Cian M, Jack Mulcahy and Sam McAllister all had fine points as Jack M had a goal bound shot just tipped over and Max also saw his shot go narrowly wide. Jack D blasted home his second goal and a mighty long-range point from hard working midfielder Tom Walsh had us in the ascendency. When Glenville pressed forward, they found our goalkeeper Cormac Crowley unbeatable making some top saves as Ronan Musgrave and Captain Eoghan Walsh led from the front. Josh McCarthy, and Cillian Burke worked their socks off with Darragh Meaney, Austin Schoeman and Sam Douglas all impressing in a complete team performance that got our championship campaign off to the perfect start. Team & scorers Cormac Crowley, Eoghan Walsh Captain, Jackson Kearns, Ronan Musgrave, Adam Lewis, Cillian Scanlon 0-2, Max Daly, Josh McCarthy, Tom Walsh 0-1, Cillian Burke, Sam McAllister 0-1, Jack Mulcahy 0-4, Jack Dorney 2-0, Cian Moore 1-3, Alex Buckley 0-2. subs used Sam Douglas, Austin Schoeman, Darragh Meaney.
Well done to Colm O’ Donoghue, Isaac Oosthuizen and Jude Devoy who represented Cork East in Caherlohan the Clare GAA centre of excellence playing 2 tough games against the Banner lads at u15 level and coming away with 2 credible draws in what were exciting and physical encounters of the highest quality.
The Thomas Kent annual Commemoration will be held this Saturday 28th May in the Thomas Kent Memorial Park Rostellan @ 3pm and the club will be well represented on the day. A wreath will be laid in honour of our late founding member Denis Kelly who was hugely influential in Aghada becoming one of the oldest clubs affiliated to the GAA being founded in1885 one year after the GAA itself was founded. The Castlelyons pipe band will be in attendance in remembrance and celebration with historical orations, music, and song.