Our Junior A footballers finished off their long year in style last Friday night with a nail biting and sometimes heart stopping one point victory over Carrigtwohill.

Aghada playing with a slight wind at their backs in the first half got off to the worst possible start with Carrigtwohill pouncing for an early goal after only two minutes. However, this didn’t knock our lads confidence with Charlie Terry settling the nerves with a point from play two minutes after the concession of the goal. This score was followed up with a beauty from Alan Hogan with Terry then levelling the scores on six minutes. Our lads were feeling a lot better about themselves now with some lovely flowing football on display. Key to Aghada maintaining the pressure on the Carrigtwohill defence was the nature of the pinpoint kickouts from Rob Whelan who gave an exhibition on restarts throughout the night. One of these kickouts led to what was probably the pivotal score in the game. The immense Ed Leahy gained possession of a short kickout thirty metres from goal where he spun and drove forward. The ball was worked to Fintan Cody who went on a massy run before riffling the ball to the back of the net. All of a sudden our lads had turned the game on its head and now led by three. The pressure on Carrig at this stage was massive with Charlie slotting over a free and Sean Morrissey adding a minor from play in Aghada’s clear purple patch. Carrig responded with a point of their own from play but Luke O’Connell replied and cancelled this score out with an expertly executed shot which split the posts. This left Aghada 1-6 to 1-1 in the lead at the first water break. Aghada looked in control at this stage and the hope was the lads could push on and expand this lead further in the second quarter before turning to face the wind. Unfortunately, this wasn’t to be the case with Carrigtwohill coming out in the second quarter all guns blazing. Carrig started to apply massive pressure on the Aghada restarts and suddenly began winning all the breaking ball. Carrig outscored us three points to one in this quarter. Max Ahern with Aghada’s solidary point here. This left Aghada leading 1-7 to 1-4 at half time but facing a breeze in the second half.

Aghada came out flying in the second half with Charlie and Fintan slotting a free each to regain our five point lead that we hadn’t seen since the fifteenth minute. Amazingly, Aghada weren’t to score for the next twenty minutes or so with Carrig racking up three points in this period to reduce the lead to two points at the final water break. It was certainly too close for comfort at this stage but when an overlap opened up it looked all but certain that Luke O’Connell would finish the game by burying a goal. However, somehow a Carrig defender got back on the line to clear the ball and one would have to wonder at this stage was lady luck on Carrigtwohill’s side especially when two frees went sailing wide shortly after for Aghada. Carrig then went up the field and hit a couple of wides before the ever industrious Fintan Cody won a free twenty five metres from goal. Up stepped the reliable Charlie Terry to widen the gap to three points. Soon after Sean Morrissey looked to have sealed the win with another minor. As the clock ticked into the red, Craig Healy had another goal bound shot saved with Aghada unable to kill the game.

Into stoppage time we went and with Carrig in search of a goal, Aghada deployed Charlie Terry to mind the square. To say he did this well would be an understatement. Terry cleared ball after ball with some fielding you wouldn’t see in Croke Park. This would not be enough to keep to constant tide of pressure from Carrigtwohill out. Ironically, it was actually a play where Carrig ran the ball which Aghada had defended so well all night that led to an unstoppable shot nestling in the bottom corner of the goal. Aghada were now under enormous pressure but our lads showed their fighting spirit which we had already seen in the semi final to keep Carrig out. With thirty nine minutes on the clock, Carrig worked the ball to the Aghada forty five where they took a shot and to the relief of all those wearing green on the night the ball sailed just wide. Rob Whelan dispatched the resulting kickout past halfway with referee Shane Hodgins whistle sounding soon after.

Credit must go to the whole Aghada defence of Richie Condon, Kane Looney, Jack Corkery, Ben Stafford, Ed Leahy and Craig Healy. The defending on show was a sight in itself especially in the final quarter. Stand in keeper Rob Whelan was also excellent in goals. Best on the night were Ed Leahy, Jack Corkery and Fintan Cody.

This result was well deserved for our lads after a very long year. I’m told its our first Junior A Football league for over thirty years. Congrats to the players and also the team management of Derick Whyte, Jim Motherway, Denis O’Leary and Mattie O’Connor. 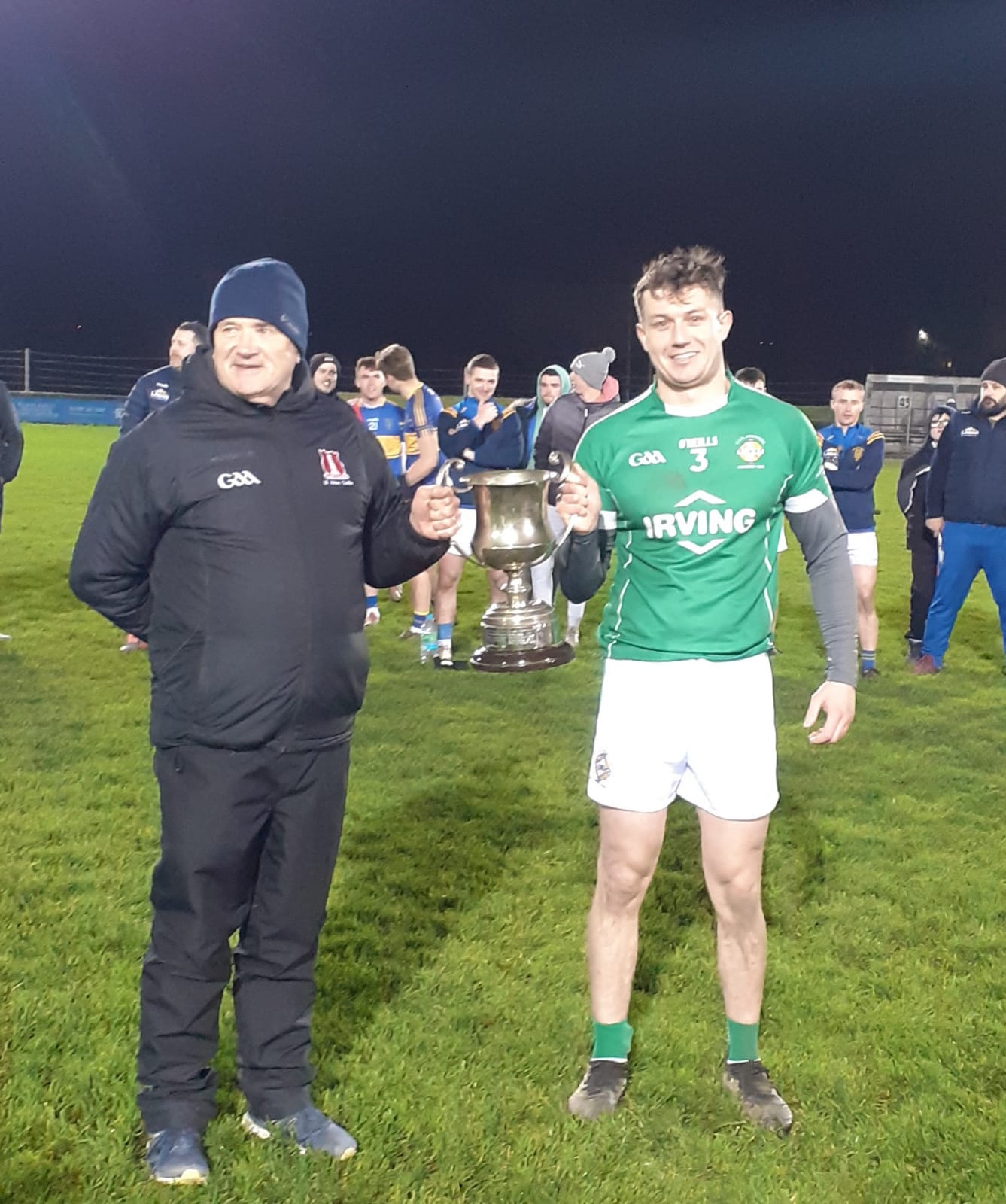 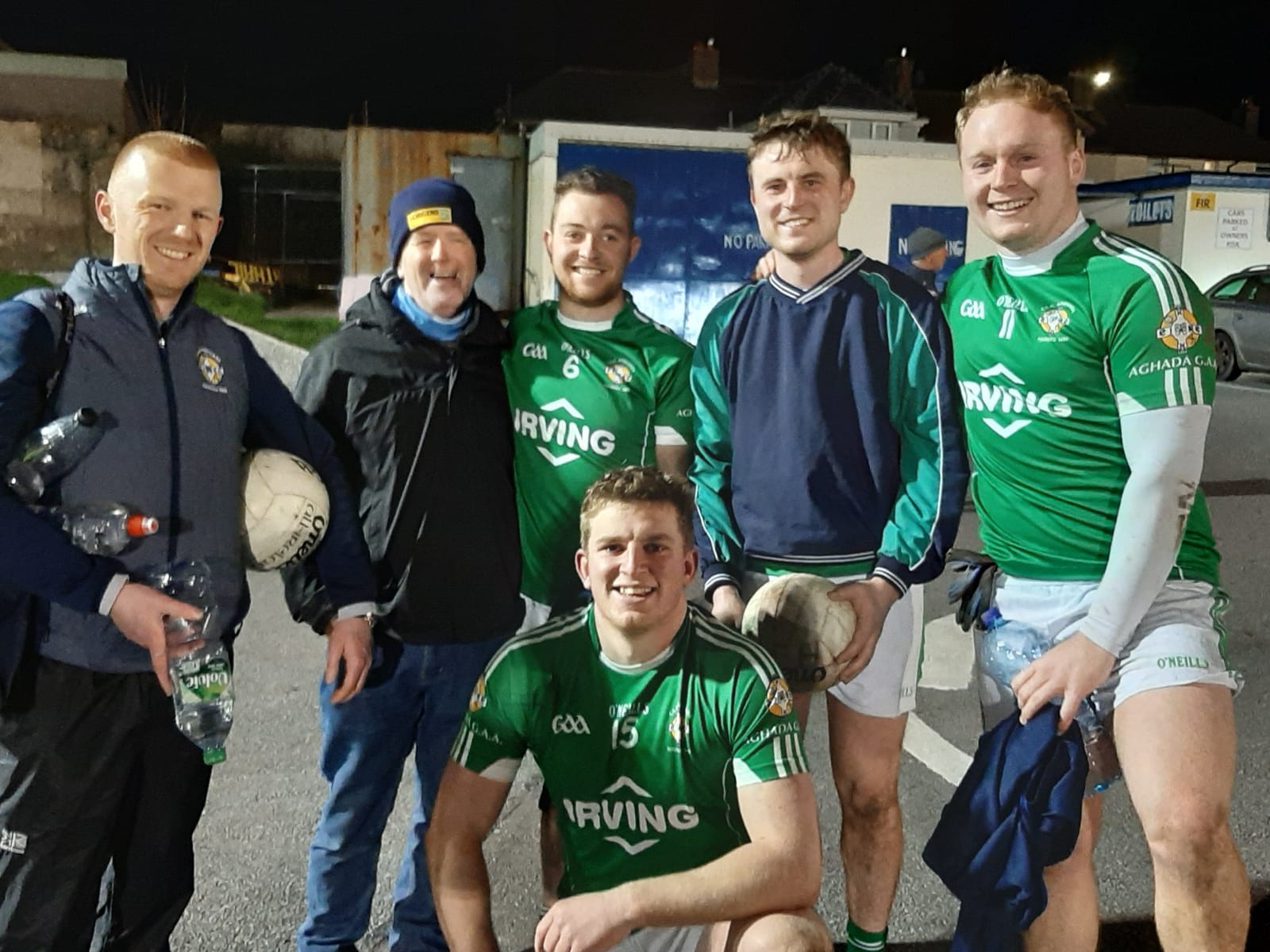