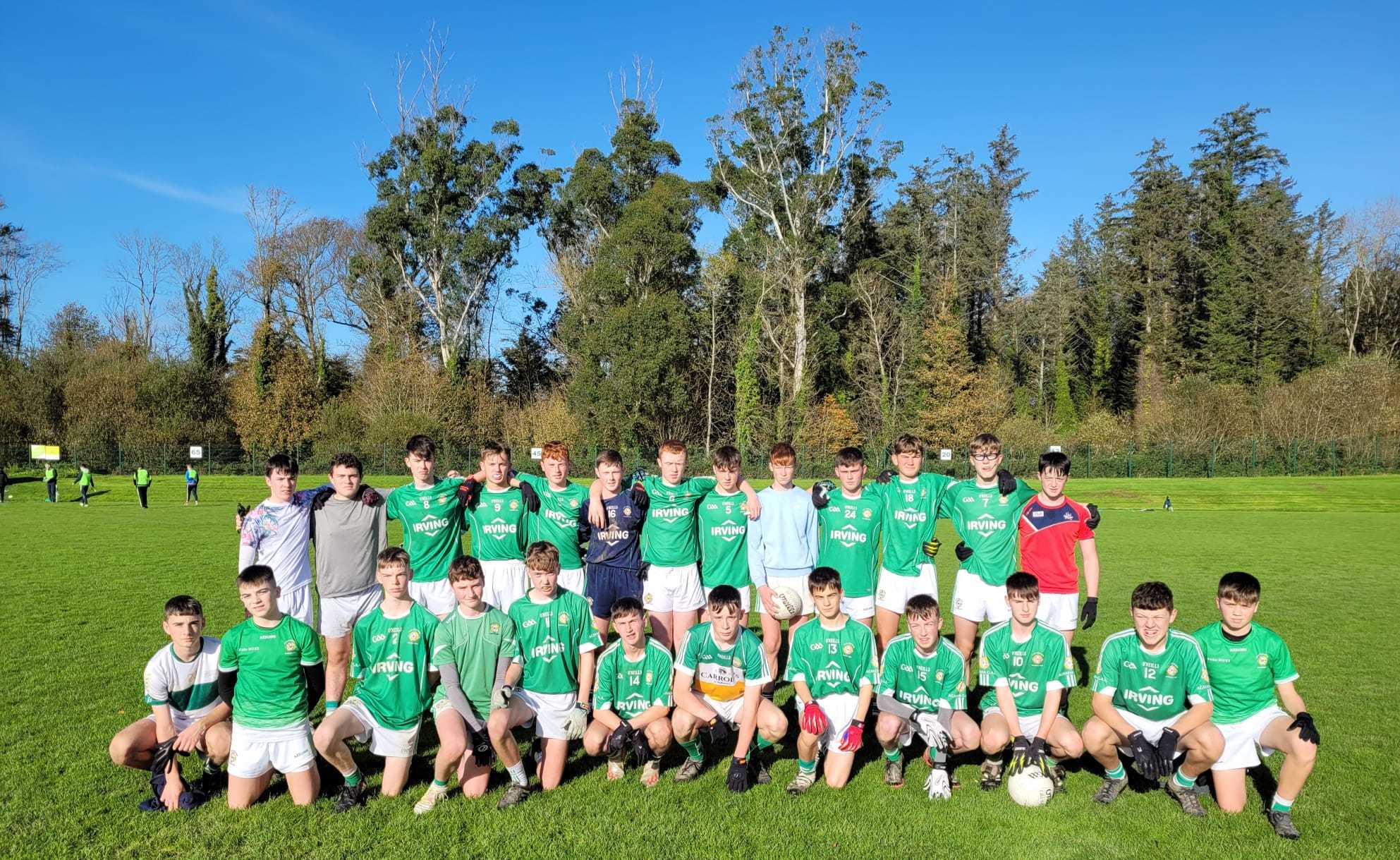 Hi folks the hustle and bustle continues when you love the GAA there is no time for sitting on the couch at weekends just yet, with plenty of entertaining action to whet the appetite, the weather gods of course play their part as Mark White said to me on the side-line last Sunday afternoon you can’t really plan for anything in this country as we watched our u16 premier 2 footballers reach a county final while being nearly blinded by the sun on a glorious day in November. We spend so much time looking for the perfect solutions to our problems in the GAA, we sometimes forget why we love the sport in the first place and especially the club and while we had to deal with the immense disappointment of the clubs relegation woes the day before we were back out supporting our u16 players watching them perform admirably and looking forward to them taking the field next weekend in the hurling semi final with renewed optimism for the future. The juvenile club were delighted to accept the invitation from Fr O’ Neill’s to enter the Tom Steele u15 hurling tournament held in memory of a wonderfully dedicated Fr O’ Neill’s clubman. We sent our u14 hurling team who acquitted themselves excellently and won the plate defeating the home side in the final, well done to all involved and to the Ballymacoda club for a very well run and organised competition. Midleton CBS are in action this Wednesday in the Dr Harty cup against CBC, the game is fixed for Midleton GAA club for 1.30pm with a great game in prospect for anyone who might be able to attend. As traditional hurling and football sessions are winding down in our academy a few games were still played last weekend with our u8 hurlers in Youghal while the u10 footballers had a mighty tussle with St Finbarr’s, hopefully as a club we can look at ways of keeping our underage players active over the winter months while meeting friends and helping them develop with their fundamental movements and skills. Time for a rant, while out walking the dog the other day I saw something that brings dumping crap to a new level. Inside in a ditch I saw a toilet yes folks a toilet, a disgusting sight, if anyone sees someone doing illegal dumping then report it immediately, these people have no respect for the parish we live in.

The best of Luck to our premier intermediate footballers who will be out to avenge last years defeat to Kanturk and reach the county final. The game is on in Mournabbey this Saturday @ 3pm so let’s get behind the lads and bring a mighty support to drive the team on.

U18 premier 2 football championship Aghada 1-6 St Michaels 1-10 Disappointment for our u18 footballers under the lights at Rostellan last Tuesday night as a strong St. Michaels outfit advance to the semi-final. On a cool night with no wind, it was the Mahon side who made the quicker start scoring 2 early points before corner forward Scott Whyte was fouled going through and he picked himself up to slot over the resultant free. The early exchanges were even enough when just before the waterbreak Ronan Murphy was dragged down in the small parallelogram and up stepped Fintan Cody to drive the spot kick low to the keepers right for a well struck goal, this left us 1-1 to 0-2 in front after the first quarter. Outstanding custodian Eric Cunningham stood tall to deny St. Michaels a goal with a point blank save, while at the other end fouls on Scott and full forward Eoin Motherway were punished by the reliable left boot of Fintan from the placed ball. Towering midfielder Fionn O’ Callaghan went on a strong run, bounced off a few tackles and fired over an inspirational point just on the stroke of half time to leave the score 1-4 to 0-4 in our favour. The second half saw the visitors come more into the game and creating chances although not taking them as they were put under constant pressure by the Aghada reargaurd, it took us 15 minutes to register our next score a fine piece of individual skill by Conall Rooney unjustly halted and Fintan made no mistake from the placed ball and for all the Mahon sides possession we still led at the final water break 1-5 to 0-7. The final quarter the boys from Blackrock showed their class as Eric had to be at his best diving low and at full stretch to keep out a certain goal, they did however put over 2 points to take the lead and it took a monstrous score from midfielder supreme Diarmuid Dugga Byrne to level the tie, but in a blink of an eye Michaels went up the field to breach the home sides defence and finally beat Eric for a well worked goal. The boys never stopped trying and a better shot selection could have yielded more scores as too many balls landed in the goalkeeper’s hands, but in truth the final quarter belonged to St. Michaels as they made a vital push for victory and built up a significant buffer that our lads were unable to claw back. Team & scorers Eric Cunningham, Aaron Atkinson, Jack Colbert, Pete White, Fionn O’ Connor, Donagh Collins, Olivier Jordan, Fionn O’ Callaghan 0-1, Diarmuid Byrne 0-1, Jack Corkery, Ronan Murphy, Conall Rooney, Fintan Cody 1-3 1-0 pen 0-3f ,Eoin Motherway, Scott Whyte 0-1. subs used Noah Devoy, Stephen O’ Shea, Cian Hegarty, Lachlan Grieg.

U16 premier 2 county football semi-final Aghada 2-8 Fermoy 2-6 Going on the evidence of this performance in Rostellan last Sunday afternoon the portents are good as our u16 footballers came up with the answers to brush aside the strong Fermoy challenge and make it into the county final in a display that showed character and determination. Played in brilliant sunshine this game was a hard honest affair from start to finish with both sides giving their all. We thundered out of the blocks with midfielder Noah Devoy winning the throw in and moving forward with menace before offloading to corner forward James Hurley who kicked the first score of the game. Our defensive unit had to be strong when Fermoy moved forward with purpose as we soaked up a lot of pressure and restricted them to long range efforts that they failed to capitalise on, eventually the pressure told when a long ball over the top found a forward in behind the defence and he hit the net with a tidy finish. When we did get the ball forward our inside line of James Hurley, Stevie O’ Shea and Josh Halpin terrorised the Fermoy reargaurd at every opportunity as the steady flow of possession stemmed from our midfield dominance and the neat foot passing of Cian Hego Hegarty particularly creating a host of chances. A good passing move ended with half forward Robert Dean sent crashing to the turf and up stepped Stevie who made no mistake from the resultant penalty, another goal quickly followed with the hard-working centre forward Oscar Slye setting up Stevie who coolly dispatched an unstoppable shot to the net. We were in the ascendancy now when after another exciting passing move centre back Fionn O’ Connor travelled into the opposition side of the field to get on the scoresheet and leave us 2-3 to 1-0 ahead at the first waterbreak. The next quarter found scores hard to come by with both sides having their moments, Fermoy managed a fisted point and broke through for a goal while Stevie hit the crossbar and eventually coming up to half time we landed another point when after a few chances went abegging Oscar came surging down the middle his shot was blocked on the line and then recycled back out to Stevie to shoot over and make it 2-4 to 2-1 at half time. We knew we were in a dogfight as Fermoy had no intention of letting us stroll into a county final and our lads responded with ferocious work rate on the resumption the six backs were tremendous with Hugh Mulcahy leading the charge, captain John Walsh raised a white flag after being played in by Oscar and a great pass by Hego with the outside of the boot set up Stevie for a fine score, Fermoy kept in touch with some nice white flags of their own and it was only a 2 point game at the final water break 2-6 to 2-4. Now it was time to stand up and be counted if we wanted to make the final and we were superb in the final quarter managing the game expertly our opponents failed to score, and we got the scores that mattered. John Walsh pushed us into a 3-point lead after picking himself up to nail a difficult free when he was fouled and a clever bit of quick thinking from James Hurley released Hego to strike over the insurance point and with Eric Cunningham exuding confidence with his calm ball handling and distribution from the goalkeeping position we were never going to relinquish our lead as we head to the decider and a shot at county final honours. These lads are giving us mighty end of season entertainment and will be out again this weekend in the hurling semi-final, battling on both fronts we wouldn’t have it any other way. Team & scorers Eric Cunningham, Hugh Mulcahy, Fionn O’ Callaghan, Conor Geary, David Wallace, Fionn O’ Connor 0-1, Aaron Kearns, Noah Devoy, Cian Hegarty 0-1, John Walsh 0-2f, Oscar Slye, Robert Dean, James Hurley 0-2, Stevie O’ Shea 2-2, Josh Halpin sub used James Motherway