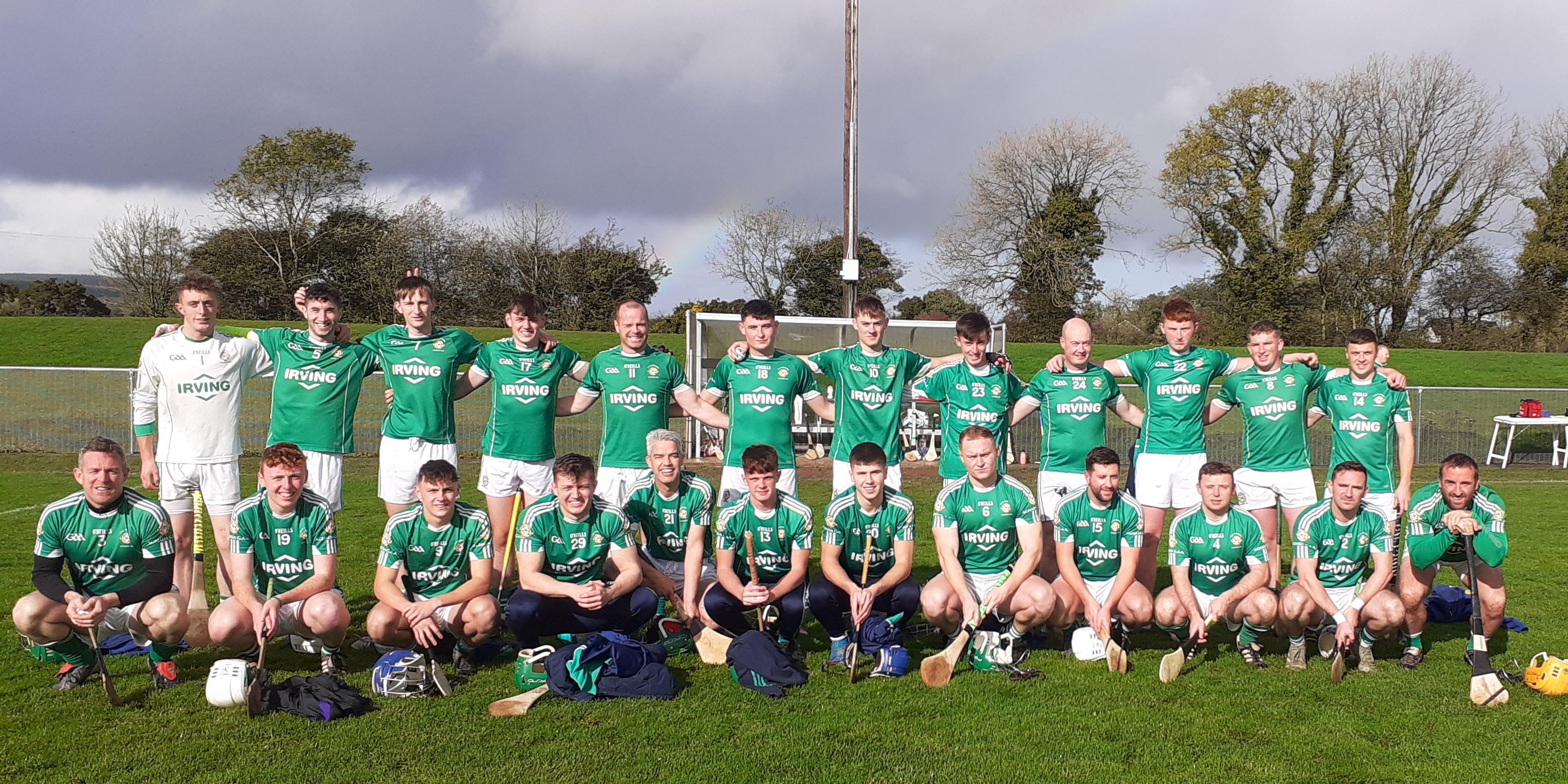 We are back in the final of the Eamonn Fleming Cup for the 2nd time in 3 years after a great team performance saw us defeat Bride Rovers in a very entertaining semi final. Rovers opened the better and raced into a 4 point lead after just 10 minutes, with 3 converted frees and one from play. They had a decent wind at their backs but after all the overnight rain, conditions underfoot were tricky which probably led to a lot of the frees. Aghada were earning and missing frees in this opening 10 also, but we eventually opened our account from a Trevor O Keeffe placed ball on 11 minutes. This and our second score, also a Trigger free, were earned by our hardworking forwards forcing turnover frees. In between Rovers hit their 5th. Next up corner forward Eoin Motherway hit our first from play via a lovely finish as he drove in the end line. At the 1st water break we trailed 5 points to 3. Scores were hard to come by for the next quarter. Rovers pushed the lead back out to 4 as, led by ex Cork senior Brian Murphy at midfield, they remained on top overall. Brian Morrissey was simply outstanding at full back for the hour for Aghada and broke up attack after attack as well as clearing a load of ball out of an (at this point) overworked Aghada defence. There was a long injury delay in this half when our sticky corner back Stephen Daly almost became Stephanie !! On 28 minutes Morrissey and tenacious wing back Ben Stafford worked together to clear the ball as far as Charlie Terry who pointed from distance. Soon after, the same player was fouled and Trigger again converted. Now Aghada got into the game but unfortunately coughed up a couple of easy frees when on the attack. Bride Rovers took full advantage and on both occasions turned these into points at the opposite end. Next Kevin O Hanlon raced in on goal, but saw his shot saved before John Connolly had the last score of the half with a nice score from play. Halftime Aghada 0-6 v Bride Rovers 0-9.

Most observers probably felt the wind was worth at least 3 points, but the lead was 6 points straight after resumption. A superb double save from Craig Hogan in the Aghada goal, didn’t get the reward it deserved as at the 3rd time of asking Bride Rovers scrambled the sliothar to the back of the net. Now however the character this team has being showing all year shone through once again. Rory O Connell and Charlie came more and more into the game. Jack Norris was excellent at wing back and with Connolly and O Hanlon more involved upfront, Aghada hit the next 6 points of the game. More specifically Trigger hit the next 6 points of the game, 5 frees and one super score from play from the left sideline. All that meant the sides were level with 7 minutes of regular time remaining on the clock. In truth Aghada should have been in front as we missed as many opportunities as we converted. Instead the Rathcormack men retook the lead with a free of their own. Although they too will rue a few missed opportunities around this time. Next O'Hanlon drew a free, which Trigger converted to draw Aghada level again. By now Aghada had a taste for the victory and were determined to drive for home. Captain Luke O Connell thundered into the game at centre back as did Motherway in the right corner. These two combined to set up John Connolly to give us the lead for the 1st time in the game with only 3 minutes left on the clock. A minute later, another Luke run out of defence, resulted in a super point from Motherway, who shipped a heavy challenge before splitting the posts from right out on the right hand touchline. As the clocked ticked into injury time, Trigger set up O’Hanlon to push us 3 points clear. Bride Rovers pointed a free, before Connolly had a chance to wrap up the game for Aghada but saw his pile driver well saved. The ball was never fully cleared and Motherway earned another free which pushed the Aghada lead back out to 3 points. At least 5 minutes of injury time had been played at this stage and yet Bride Rovers never once stopped going at Aghada. In the last play they were awarded a free 25 metres from goal. A rocket of a shot was stopped on the line by Brian Morrissey and it was fitting that the Aghada man of the match was driving out of defence with the sliothar when the final whistle finally blew. It was a victory that was fully deserved and thoroughly enjoyed by the Aghada faithful even if we did miss the regular Lar cameo! (Discipline reasons I’m told😉 ). Well done to all involved, this team is having a great year and now have an East Cork final to look forward to. Carrigtwohill’s second team await us after winning their own semi by 4 goals, so certainly a huge challenge awaits. Just the way our lads like it! 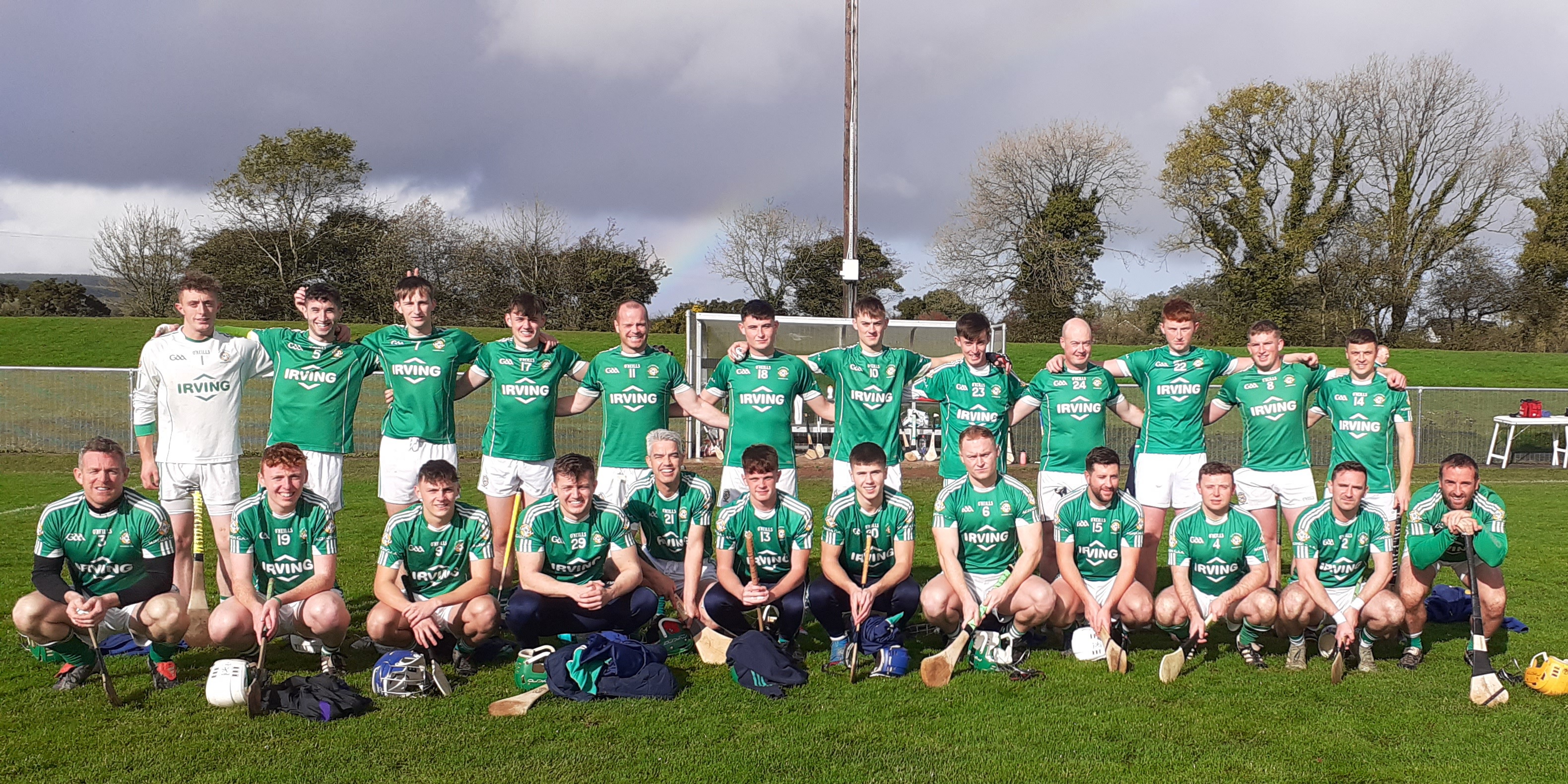