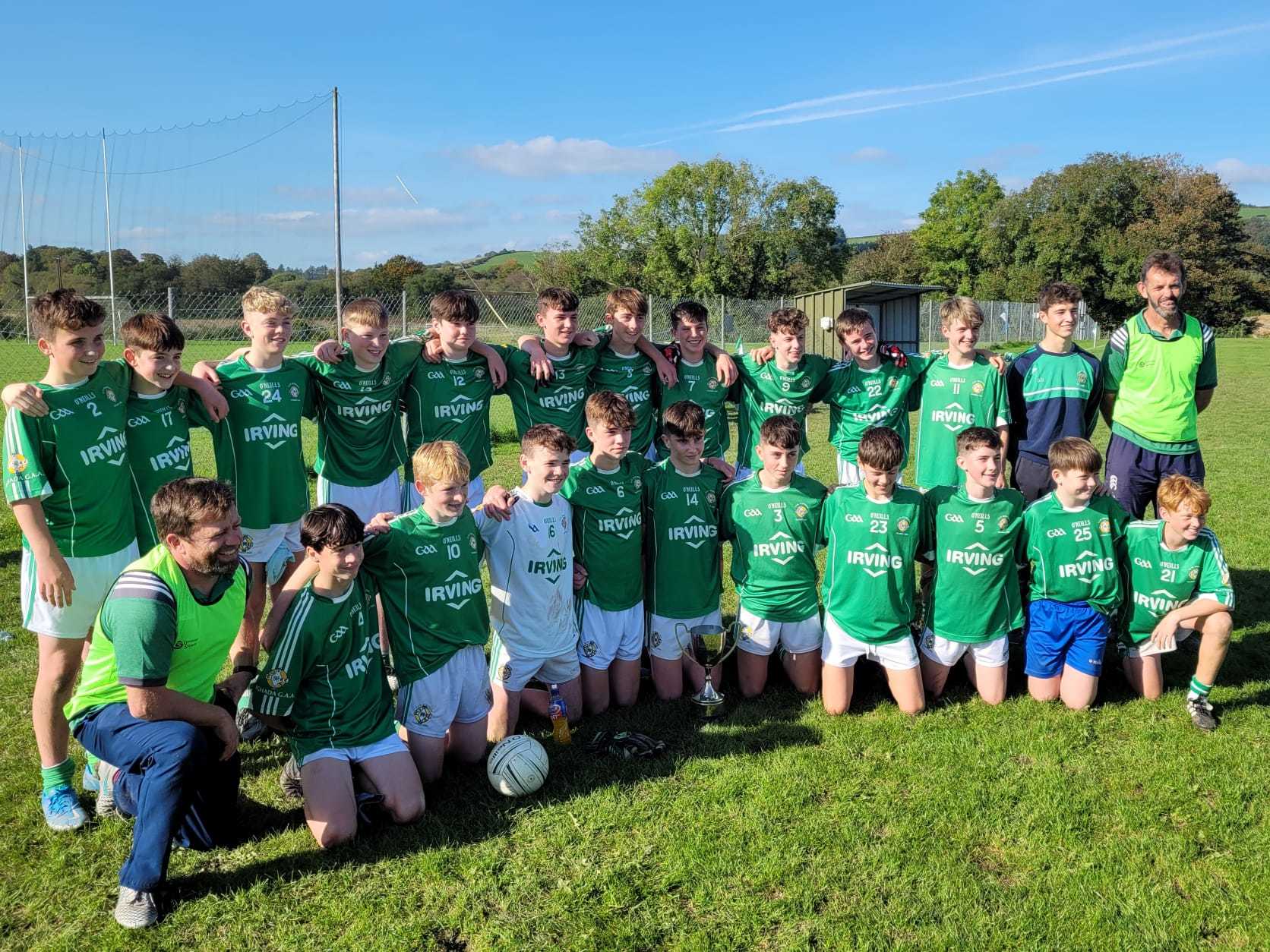 Published: about 2 months ago

Hi Folks, another memorable week for the juvenile club with our second uU15 football team producing the goods to win their county final with an exhilarating team performance against Skibbereen side O’ Donovan Rossa to bring great scenes of joy as captain Jack Linehan led the victory parade into the parish and back to the clubhouse, well done to all on your truly magnificent victory. Our U17 hurlers had a fine win against Whitechurch and our parish league football finals were a huge success, thankfully the impending bad weather held off and we were treated to a great display of football skills from our U9 and U10 panels. The hurling finals continue this Friday night the plate final of Kilkenny and Waterford starts at 6.15pm while the cup final between Limerick and Cork has a 6.30pm throw in, so please come along and support our young camáns, the stars of the future in our Friday night lights parish league extravagancy. This year’s parish leagues are kindly sponsored in hurling and football by Mike Lehane of Energy fitness Midleton and we very much value and thank him for his generous support. The fundraiser for our great friend Seán to help him and his family with his ongoing medical expenses was an outstanding success so a big thank you to the main organisers Colin Rooney and Declan Devoy and all who helped in making this the success it was, a fantastic club effort bringing the old and the new together in perfect harmony on a day that will live long in the memory.

The floodlights on the quarry field shone through the fog and misty rain sweeping in from the lower harbour on Wednesday evening as our U17 hurlers welcomed Whitechurch to Rostellan. Our visitors enjoyed a numerical advantage for most of the game and led at various stages, as our boys showed true grit and determination while playing an expansive running game that proved too much for our opponents in the end. This was best exemplified by our dynamic half forward line of Oscar Slye, Ronan Murphy and Noah Devoy who ran intelligent lines to negate the extra man and put some very impressive scores on the board. Oscar opened our account with the first point of the evening as our visitors responded in style with a point and then hit the back of the net to the take the lead. Ronan M cut through the middle and struck his first score of the day quickly followed by Noah who made no mistake after a good ball from half back Cian O’ Shea to cut the deficit to one at the first water break 0-3 to 1-1. With Cian Hegarty, Conor Geary and Fionn O’ Callaghan all prominent in defence we limited our opponents to just 2 points in the second quarter as scores from Oscar 2, Noah 2 ,Ronan M and Stevie O’ Shea had us ahead at the break 0-9 to 1-3. The second half really livened up with quality scores on both sides, the pick of the bunch a well worked goal as corner forward Ronan Walsh won a fantastic ball and played in Ronan M who rounded the defender and buried the ball in the back of the net. Both teams swapped points and Whitechurch struck another goal to leave just 2 points in it at the second water break 1-13 to 2-8 and all to play for. From there to the finish we put on the afterburners out scoring our opponents 6 points to 2 with Stevie 2, Noah 2, Oscar and midfielder Aaron Atkinson all finding the target to run out deserving winners 1-19 to 2-10 as referee Pa Beausang blew the full time whistle on an entertaining encounter. Team & scorers James Hurley, Seán Santos O’ Sullivan, Cian Hegarty, Conor Geary, Cian O’ Shea, Fionn O’ Callaghan, Aaron Kearns, Pete White, Aaron Atkinson 0-1, Noah Devoy 0-6, Ronan Murphy 1-4, Oscar Slye 0-5, Stephen O’ Shea 0-3, Tommi Oosthuizen, Ronan Walsh, subs used David Wallace, Diarmuid Cotter.

The U15 footballers banished some ghosts after the disappointment of last weeks hurling final loss in extra time to comprehensively defeat Skibbereen side O’ Donovan Rossa in the football decider in Brinny on Sunday afternoon. The sun shone brightly and so did our boys with a scorching display of attacking football from the first minute to the last. The main architect of the win was ace corner forward Jude Devoy finishing with a hattrick of goals in a powerful display of clinical finishing. We started brightly Cormac Walsh breaking through to convert our first point with ease, captain and full forward Jack Linehan quickly added a second and we got an early sense that this team was in the groove. A long ball in was gathered by Jude and he turned on a sixpence to score our first major of the day with a composed finish. The Skibbereen side did have their moments but were stopped in their tracks by a resolute Aghada defence as the forward momentum was paying off handsomely. Dynamic midfielder Eanna Crowley who showed great athletic ability and work rate all through was next on the scoresheet with a fine point after a strong run, ably supported by his industrious midfield partner Seán O’ Brien, Jude finished with aplomb for his second green flag and added 2 more points as we headed to the first water break 2-4 to 0-1 in front. Our tails were up and the management asked the boys to keep the foot on the pedal as the performance levels all over the pitch were top notch, in full back Colm O’ Donoghue we had a player of real presence constantly breaking up attacks with his speed and awareness, beside him in the corners Jack Kelleher and Pierce McLaughlin were solid, in the centre Isaac Oosthuizen was like a quarterback with his fine array of passing hitting the full forward line regularly, while on the wings Joe Connolly and Cillian Falvey were breaking up and setting up attacks. The first point of the next quarter was a great piece of skill by Andrew Murphy exchanging passes with Eanna he ran through for a clever finish. Captain Jack pounced for goal number 3 showing a poachers instinct when Ronan Norris broke the ball in his direction and we were 3-6 to 0-3 in front at the short whistle and looking good. The Skibb side to their great credit piled on the pressure in the second half and found the Aghada goalkeeper Sam McAllister like a brick wall in front of them, with a string of remarkable saves a double block from a 13 metre free the highlight to keep our big lead intact. Jude won a kickout with a fine piece of high fielding and played in Jack L for another quality goal finish as Dara O’ Conchubhair struck the post with a ferocious shot and then delightfully set up Jude for goal number 5 and his hattrick, in between Rossa’s found the net giving Sam Mac no chance and the introduction of Fionn O’ Sullivan, Adam Lewis, Tom Walsh and Cian Moore added a freshness and pace to proceedings as we ran out comfortable winners in the end 5-9 to 2-5. Captain Jack Linehan accepted the cup and delivered a speech on behalf of the excellent panel and management team led by the inspirational Declan Devoy, much to the happiness of the travelling Aghada faithful. A special mention to young referee Luke Knight from Kilmurry who handled the game expertly it is great to see young referees taking up the whistle in Cork. Team & scorers Sam McAllister, Jack Kelleher, Colm O’ Donoghue, Pierce McLaughlin, Joe Connolly, Isaac Oosthuizen, Cillian Falvey, Seán O’ Brien, Eanna Crowley 0-1, Andrew Murphy 0-1, Dara O’ Conchubhair, Cormac Walsh 0-1, Jude Devoy 3-5, Jack Linehan 2-1, Ronan Norris subs used Fionn O’ Sullivan, Adam Lewis, Tom Walsh, Cian Moore.

The Annual Billy Ahern U12 football competition in memory of our late great former player Billy takes place this Saturday. This year’s competing teams are Aghada, St Colmans, Glanmire and a Mitchelstown team brought to Rostellan by our former player Denis Motherway son of our club president John T Motherway. The action gets underway at 10.15am with the plate final fixed for 13.00 and the cup final 13.15 so please go along and support the boys in green as you’re sure to be in for a feast of exciting football.