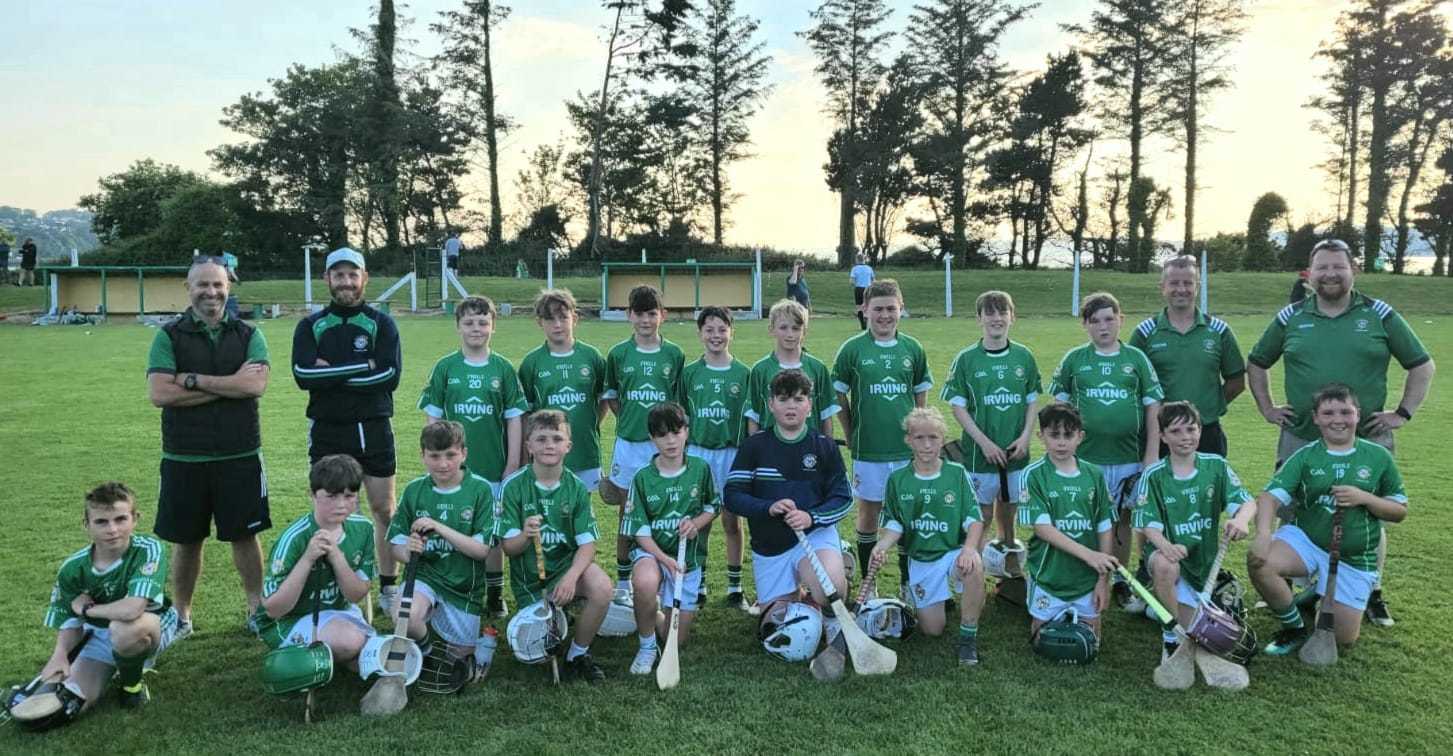 The games are in full flow as our young players enjoy the freedom and enjoyment of our GAA fields that are bursting at the seams with a hive of activity. First into action in our latest sequence of games were our U16 footballers against Kilta Óg in Rostellan and although the match ended with 11 scores apiece it was Kiltha Óg’s penchant for bagging goals that proved to be the home sides downfall despite the best heroics of goalkeeper Neil Cunningham and a fine score from our new recruit Diarmuid Cotter on his football debut, the visitors ran out winners on a scoreline of 5-6 to 0-11.

Next up were our young camáns who had a fantastic win against Lisgoold in the U12 hurling league. In a complete team performance the defence marshalled by Rossa White and Jake Morrissey stood tall, the midfield of Donncha Walsh and David Murphy bristled with energy, while upfront the scoring prowess of Robbie Oosthuizen, Dara O’ Brien and Rian O’ Brien put the scores on the board, while also on the same evening in the forest field our U15 C3 hurlers put near neighbours Midleton to the sword in a fine exhibition of score taking clocking up 5-12 as Midleton responded with 2-9 in a highly enjoyable game of hurling. Our U15 Div 5 footballers were not as proficient as they lost out to a very strong Valley Rovers side in Brinny. The next match report comes from the juvenile assistant PRO Ben Walsh, in the U17 football championship round robin game against Fr O’ Neills in Aghavine. Many thanks to Ben for this excellent match coverage, he has just completed his Leaving Cert and was straight into action with young volunteers, like Ben the club is in a good place.

Tough result for the U17 footballers as they missed out on a win against Fr O’Neills by 2 points. It was a fine evening for the lads who were putting a bit of form together after a few losses recently. They started off on the front foot with a 1:3 to 0:2 lead at the first water break, the goal coming from Stevie. They continued to press Fr O’Neills opening up a 7 point lead, however a few mistakes at the back saw the home side within a point of Aghada at half time. Aghada were dealt a huge blow as Fionn O’ Callaghan was dismissed for what appeared to be a harsh decision. Stevie kept the scoreboard ticking over after converting a penalty and Noah Devoy slotting over a spectacular point from the left hand side of the pitch. Aghada produced some fabulous football thanks to Seán Busteed and Tommy Oosthuizen as they took a 5 point lead heading into the final water break. Theextra man took its toll on the Aghada defence as they conceded a few easy points and a goal setting up an exciting finale. 2 points from set pieces let down Conor Counihan’s men as they lost out by 2 points. The team can take some positives from this defeat, while also learning from their mistakes as they head to the next round and a must win game against Cobh.

We were back on the victory trail when our U13 hurlers defeated Lisgoold, racking up a fine score in the process with a convincing 5-14 to 1-5 win, our boys were out of the blocks early with a point in the first minute, we dominated play for much of the first half with Lisgoold settling more into it as the half progressed. Aghada led 2-8 to 1-4 at half-time. In the second half Aghada emptied the bench and powered to victory with Jack Dorney playing well upfront and was ably assisted by Ollie Kileens, in defence Josh McCarthy and Cian Moore caught some great ball and put the team on the front foot, well done to all involved. The bubble was burst in our next outing as our premier 1 U15 hurlers were comprehensively defeated by Sars in Rostellan, despite some heroics by our goalkeeper James O’ Donnell and inspirational full back play from Hugh Mulcahy it was not enough to keep a rampant Sars attack at bay, a steep learning curve for our boys but one they are capable of overcoming as preparations ramp up for the championship opener against near neighbours Midleton on the 10th July in what is sure to be a cracker. We then travelled to Rathcormac to take on Bride Rovers in the U16 hurling league and although defeated the boys put up a great performance scoring 3-8 with impressive showings from Aaron Kearnss and John Walsh. Behind at the short whistle 2-6 to 0-6 we upped the ante in the second half with a cracking goal from Fionn O’ Connor and two green flags from the clinical Fionn O’ Connell. The home side still had enough in reserve to run out worthy winners on a scoreline of 4-13 to 3-8.

The Go Games continued to provide great entertainment and fun for all involved as Aghada played host to Killeagh in Rostellan on a busy Saturday morning with our U7, U8, U9, U10 and U11 teams all in hurling action, the coffee truck did a roaring trade as the games were played out in a welter of excitement.

Nostalgia Last week in 1979 Aghada U12 hurlers won the East Cork final comprehensively defeating neighbours Cloyne in what was a landmark victory for the juvenile club, led by selectors Tom O’ Gorman, and the late greats Seán O’ Keeffe senior and Willie Ryan. The cup was raised high by team captain Declan Devoy as Seán O’ Keeffe senior lit a bonfire in Rostellan to welcome the team home. Much to the delight of juvenile secretary Willie Ryan.