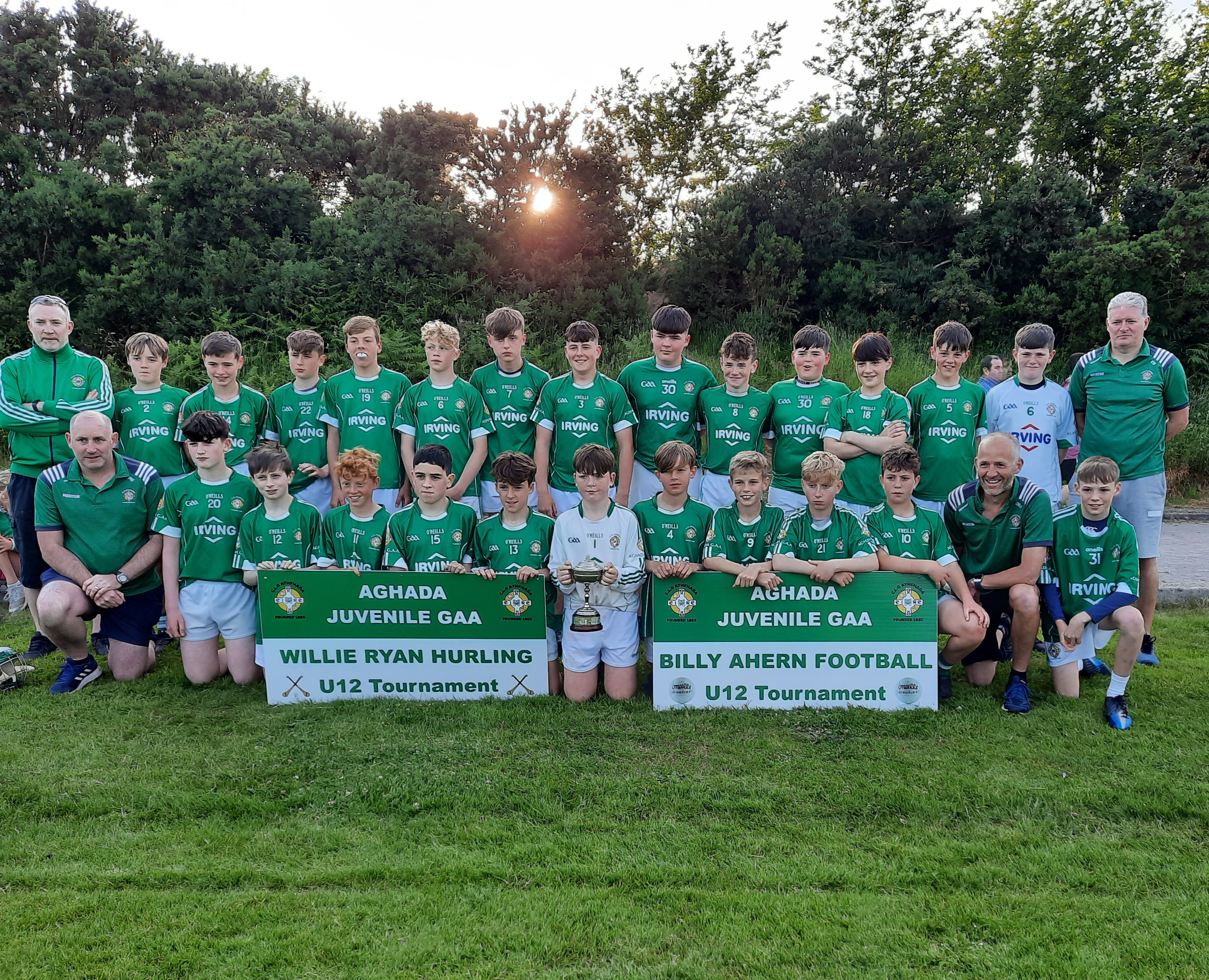 The weeks fixtures started in exciting fashion as our U16 hurlers won a highly entertaining encounter against Kiltha Óg in Rostellan. Goals from Stephen O’ Shea and Oscar Slyne along with the commanding Fionn O’ Connor from centre back and the influential young Corkery before he was forced off with a shoulder injury brought Aghada the victory in an impressive scoreline of 4-20 to 4-18.

Many thanks to bainisteoir Diarmuid O’ Shea for this next U12 report Aghada 3-15 Glenville 5-9 that produced a high scoring draw in the football league in Rostellan.

On a perfect evening and an even more perfect pitch Aghada u12 Footballers and Glenville produced a very high scoring game which changed from each water break to the next. Firstly each and every player wishes Evan Courtney a speedy recovery after a wrist fracture at the weekend. The Rostellan boys started with intent with some early attacks creating chances and some scores taken. Captain on the nigh Peter Mulcahy was heavily involved early on. Sean O' Reilly was busy around midfield and bursting onto opposition kickouts with his speed and reading of the play. Glenville got on top after a bit as the Aghada sideline made changes all over the pitch , swapping the 5 subs in quite regularly. At HT we trailed by 1 point, 1-7 to 2-5. Then we fell further behind as the visitors rattled in some goals despite Cathal in goal doing everything he could. Aghada trailed by 8 points approaching 2nd water break. As seen with games on TV and in all championships last year, this is where these lads pushed on. With a score of 2-9 alreayd registered they were asked to put 3 more points on the board to give us 2-12. They responded with 1-6 with serious 45 kicking by young Rooney , support from Sam Morgan, Eoghan O' Shea. Ciaran the wall Cashman decided enough was enough, kept Glenville at bay and came off for Robbie who played at 14, corner forward and full back. Fionn Buckley also played in various positions and to finish with 3-15 was a squad result on the night. Thanks to Pa Beausang also for excellent refereeing.

Aghada lost out to much stronger opposition on the day to St. Michaels in U17 football and Passage in U13 football respectively and much brighter days lie ahead for these teams as the season progresses.

We then had a strong showing from U15 Div1 team who put on a great display of football when defeating Youghal 4-14 to 3-3 with some passages of play very pleasing on the eye, hard to single out players but Robert Dean and Conor Bakx were immense for Aghada. Well done to all the teams that were in action and are representing our club so well.

The parish league hurling finals from 2020 were held in Rostellan last Friday night with fantastic skill and endeavour on show from our young camáns, with the cubs captained by Rian O’ Brien defeating the panthers in a rip roaring encounter that will please coaches Colm O’ Brien and Aaron Stafford.

Awards Night were also held on Friday night for our successful teams from 2020 out in the open air of our Quarry pitch. Pride of place went to our outstanding double winning county U14 football and hurling teams along with our other double winners the magnificent U12 Willie Ryan and Billy Ahern winning teams, our club president JohnT Motherway was on hand to give out the medals. Juvenile PRO Donal Walsh was MC for the night and speakers included Secretary Mark Whyte, who thanked everyone for their continued support of the Juvenile club and our joint sponsors of the parish leagues Aidan of East Cork Crane Hire and Anthony of Hydes. Adult club chairman Jimmy O’ Leary spoke of the strength of the Juvenile club and the fantastic structures in place. Juvenile Chairman PJ Hurley wore two hats as he was also bannisteoir of the successful U14 county winning hurling team and spoke of his pride in the panel of players and the backroom staff that made their dreams a reality. Director of Football and U14 Football winning boss Declan Devoy thanked the players who a week after winning the hurling won the semi-final and final to complete a remarkable double. There was still some time for some novelty gifts at the end as all the mentors and backroom people were presented with mementos to mark the achievement. All in all a great night as we look forward with optimism to the season ahead.

Go Games continued again this week with our U7,U8, U9, U10 & U11 Footballers in action against Cobh and Mayfield, both at home in Rostellan and away in Cobh. Great skills on show again and with these young footballers the future is bright!