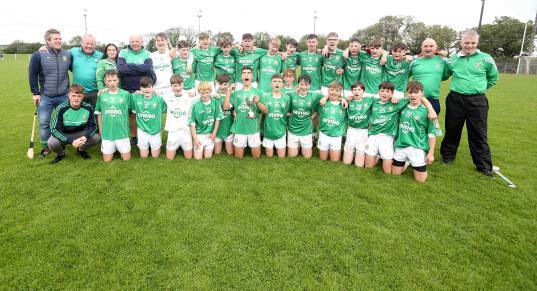 Aghada u 14s lead from fourth minute to the finish in added time to win by the narrowest of margins: Aghada 3-8 Youghal 4-4

SO... a short journey this Sunday compared to the last trip to Araglin. And a different start by Aghada in this game and indeed the group encounter against Youghal. And when it seemed they may have snatched defeat form the jaws of victory, up they stepped to put themselves in front by the narrowest of margins in added time.

Intent was obvious from the lads in green from the first whistle. An early burst out of defence by Hugh found David W in midfield. Seán O' Callaghan playing deep sandwiched between our 2 central defenders. Then in the 2nd min a burst by Robert Dean found James Moths Óg , maybe Johnty Óg, anyway he was fouled and up stepped James Hurley, JH with his first free of the day and it was not a good start for him. On 4 minutes Callum Roberts won another free and this time JH struck between the posts.  Aghada were out of the blocks early unlike the semi final and Youghal did make a foray up the pitch but the ferocity and pace of the backs drove us into attack again. Samuel O' Driscoll popped up with a score from play on 6 mins, before Youghal got their first real attack underway but they failed to close the gap.

As we moved through the first quarter, J Motherway missed a free and again failed to punish Youghal and give Aghada a belief that it would be their day. In the 13th minute Tomás Condon made his usual run in from the wing to put Aghada ahead 3 to zero. Youghal got their opening score after this before JH missed yet another free. So the Rostellan boys led 0-3 to 0-0 at the water break, 19 minutes. The 3 missed frees really give an indication of the trouble the forwards, midfield and backs were causing Youghal,  as Youghal did not let them in too easily. Immediately after the water break young Condon again split the posts. Youghal threatened more and when David broke up a Youghal attack , Aghadas forwards were not able to use it and as play developed Youghal won a free out around the middle, this was dealt with but Youghal came again. Samuel and Tomás hit wides before Youghal got their 2nd score just before half time to leave just the 1 score between the teams. Aghada lead 0-5 to 0-2 at HT.

A different test in the 2nd quarter for Aghada and this was a sign of what was to come. Straight form the throwin, a Youghal free on the 65 found its way to the Aghada net and suddenly the game was level. Now there was a test of character and courage. The response was good as with 3 minutes Samuel goaled and a number of players in defence repelled Youghal attacks repeatedly. As a spectacle this game had a different look to the first half. On 36 minutes Callum goaled to make it 2-5 to 1-2 . It was end to end and JH again struck wide off his left, Youghal hit a wide but credit to lads for doing what they trained to do. Play and try to score and win a game. That's what it's all about. Then came a great moment. Sean Call made a burst up the middle to goal and it now read 3-5 to 1-2. BUT. Youghal showed steel to keep going and up they went to attack again, to score a softish goal form Aghadas viewpoint, and they tacked on 2 points before the 2nd water break to leave it 3-6 to 2-4. Aghada nearly had a goal before the water break when a shot went wide and Youghals keeper went full length and said hi to the post, thankfully he was ok.

Youghal came again and ball through the defence was dealt with by James O' Donnel and cleared . Tomás struck again. Hugh dealt with a Youghal attack and cleared but it was not used out the pitch by Aghada and a shot by Youghal hit the post and fell to a waiting forward and it was buried. Score now reads 3-7 to 3-4. Youghal came in droves now, on 58 minutes they goaled again to level it and this was now a real test of Aghada. And forward they went again. Time was up and it was now upto referee James Hennessy. Young Young Rasper found himself in space. Did he try to break the net?? He nearly broke the crossbar when a point would probably have sealed it. Sometime you are tested. Other times you turn it around early and push on. Unlike the last 2 games - a loss to Youghal by 6 points in the group game where we chased the game right through, a poor start against Kilara Óg last week, but this time they took the game to Youghal from the first whistle. To Youghals credit they reeled Aghada in slowly. So a free is won by James Motherway. And up steps JH to make up for the 2 he missed early on. A 1 point lead. How long will be played now..... And so the final score and last note taken was - JH free 3-8 4-4

As was said by a shrewd follower of games afterwards. They nearly snatched defeat from the jaws of victory. The intent was there from the off. Courage was shows. Bravery was shown. A just reward for players, coaches and parents.