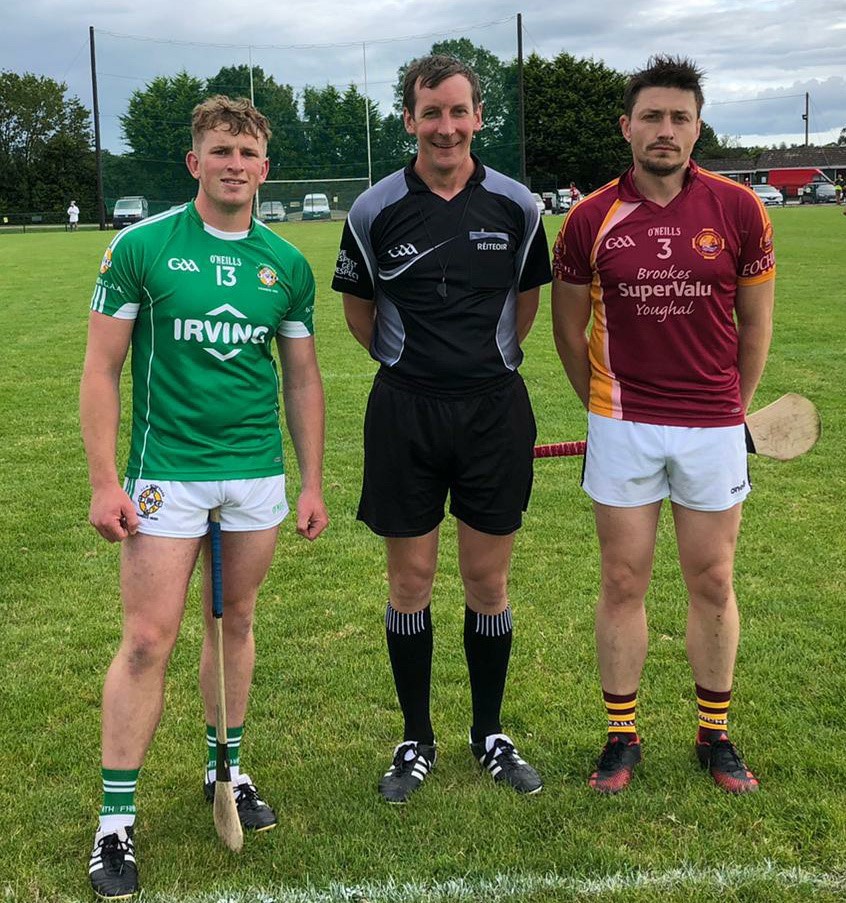 It was really very enjoyable. That’s the best I can describe it. A game against a local East Cork team in an East Cork venue. Tough, hard and skilful hurling. A game that was up for grabs right up to the closing stages. No quarter being asked or given. And Aghada coming out on top. All adding up to a very enjoyable hour plus in the sunshine in Killeagh last weekend.

The sending off was huge. Youghal being reduced to 14 men with 14 second half minutes played. At the time the scores were tied at 2-10 v 1-13. Youghal would only score once more in the contest and they will feel they were in the ascendency at the time of the dismissal. And they will definitely be wondering “what if” around the whole incident. Aghada will probably look at it differently. Yes Youghal had started the second half in blistering form, hitting 1-2 in the opening 6 minutes to just a Will Leahy free in reply. The goal was an intercounty standard finish from Cork player Bill Cooper. And at this point Aghada were up against it. However they were manfully standing up to the pressure. With David Rice and Ed Leahy very strong in the corners. And in Jack McDonnell at midfield, Aghada had a player determined to carry the fight back to Youghal. He won several rucks around this time and drove forward each time. His hard work was responsible for 2 of Aghada’s 3 points in this period - setting Pearse off on a run that led to a free and setting Charlie off to tee up Leahy for a fine point from the sideline. Aghada’s other point at this time was another Leahy free, this time after Cian Fleming had carried the ball and the game to the Youghal defence. So after seeing their 2 point interval lead turned very quickly into a 2 point deficit, by the time of the sending off, Aghada had steadied, drawn level again and were beginning to get on top once more. The water break came after the dismissal giving both sides an opportunity to plan for the numerical difference. Tim Hartnett was deployed in a role he again did very well at, that of the sweeper. Aaron Stafford thundered into the game at wing back, while Mike Russell stood strong in the pivotal centre back position for the full hour. It was another Jack Mc run that drew the foul which gave Aghada the lead on 17 minutes. And you sensed they had the bit between their teeth. Still the final scoreboard here is flattering, and Youghal more than held their own over the next 10 minutes keeping Aghada scoreless. It was the 27th minute before Aghada kicked for home. A fine Aaron Berry point was soon followed by Jamie O’Hanlon with a very clever scoop shot dropping over the crossbar after his trade mark speedburst for goal. Hot on that scores heels came a nice finish from the impressive John Looney after taking a good pass from Russell. 3 minutes into injury time a free from the sideline from Leahy gave Aghada the insurance point. Although Aaron Stafford hit a super point a minute later just to be sure. Shortly after that came the long whistle and Aghada’s late scoring surge made them deserving winners, if maybe not by the margin the scoreboard was displaying.

The 1st half had been end to end. Aghada looked slightly on top, but Youghal perhaps more efficient up front. Both sides raised green flags. Charlie setting up Looney who rattled the net with a fine strike. But Youghal billowed the roof of the Aghada net a few minutes later after being first to the breaking ball in the Aghada full back line. They had also drawn a fine save from Ciaran O’Shea in the Aghada goal, not long before that and would have been relatively happy to be only 2 down at the break knowing they had the wind for the second half.

When all was said and done Aghada emerged with back to back victories, after the football win v Castletownbere last weekend. 16 of the 17 players were all togged for that football game, so dualism is alive and well in our club and long may it continue. Next up we stick with the camáns and play Carrigaline, the team who knocked us out last year, in Cobh on Saturday at 5pm.