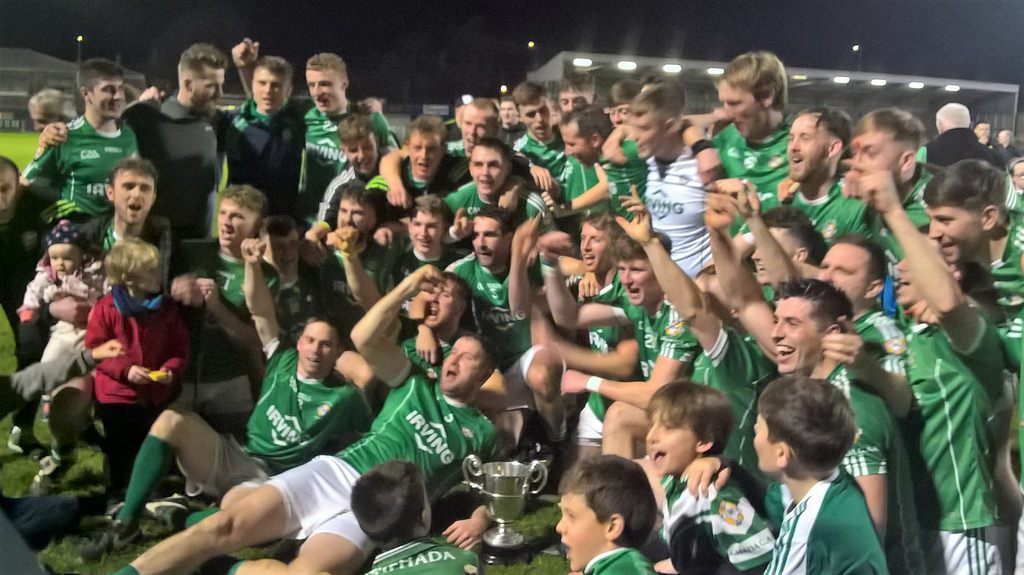 The green flare was set off just metres from where the team and management gathered in one final huddle. The young Aghada fans broke through the gates and ran to hug and celebrate with the group. The older fans either stayed put in the stands or moved more slowly, hugging and shaking hands with anyone and everyone they met wearing the green and white. All had some version or other of the same thought that they just had to express – We’ve done it!!

Proud captain John O’Connor made his way into the stand where he received the cup from County Board chairman Ger Lane. He said his thank yous and then the team and their supporters returned to the grass of Pairc Ui Rinn where the celebrations began in earnest. Nobody it seemed was quite ready to leave the field. Aghada had won their 1st ever adult hurling county and these were moments to be truly savoured.

Looking back now Aghada were never going to let this opportunity pass them by. The man with most experience of big days, Pearse O’Neill, was very influential in settling the Aghada team from the throw in. He set up the 1st 2 scores for Ronan Kennedy and Will Leahy. Cian Fleming had the 3rd score of the game from a tight angle on the right hand side and on 10 minutes Pearse himself had Aghada’s 4th point. Crucially while Eire Og were matching Aghada to a large extent in the opening 10, their accuracy in front of goals deserted them. They matched Aghada’s point tally with their own wide tally. Some of which were soft wides. And this can only have served to unsettle them even further. They did point on 13 minutes, but by now, spooked by the start of the Aghada forwards, had withdrawn one of their own attackers. The tactic didn’t seem to work however as corner back Timmy Hartnett revelled in his role as sweeper and cleared ball time and time again. Outside him Shane Wall was to put in an outstanding hour at wing back, while evergreen Stephen O’Keeffe once again delivered his usual excellent display. Leahy and then Fleming from another tight angle but this time from the opposite sideline, put Aghada 6 v 1 in front. Eire Og badly needed to settle and two points in a row helped them in that regard. But these two scores were again cancelled out by 2 Cian Fleming frees. As the short whistle approached the sides exchanged points, Leahy for Aghada, and as the sides headed for the dressing rooms, Aghada led 9 points to 4.

On resumption it was again Aghada that opened the scoring with a point after 2 minutes. On 36 minutes impressive wingback Billy Hennessy pointed a huge effort to push Aghada 7 points clear. With Jake O’Donoghue and John O’Connor also playing well at the back, Aghada looked comfortable. Next however came the Ovens outfit best period, when they hit 3 unanswered points to leave just 4 between the sides and 20 minutes still to play. Next the Eire Og ‘kepper made a super save from the in rushing John Looney. Aghada missed the resulting ’65 and Eire Og started to get a foothold in the game. Stalemate followed for the next 10 minutes with both sides hitting just a point and both sides also hitting a number of wides and with 11 minutes remaining it was still a 4 point game. Next though, Aghada put their foot on the accelerator again. 3 points in 3 minutes and it was all Aghada now. The 3 points came from a Fleming free, and incredible strike from midfield from Aaron Stafford, and a super steal and point from Looney. Next up substitute Kevin O’Hanlon picked up a loose ball before setting off on a run and pointing smartly. It was now 16 v 8 and victory was virtually assured. Eire Og battled right to the end however, but against a defence marshalled by excellent ‘keeper Trevor O’Keeffe, another point was all Eire Og could muster. Soon after the final whistle sounded which sent the Aghada team, panel, management, backroom team and supporters into wild celebrations.