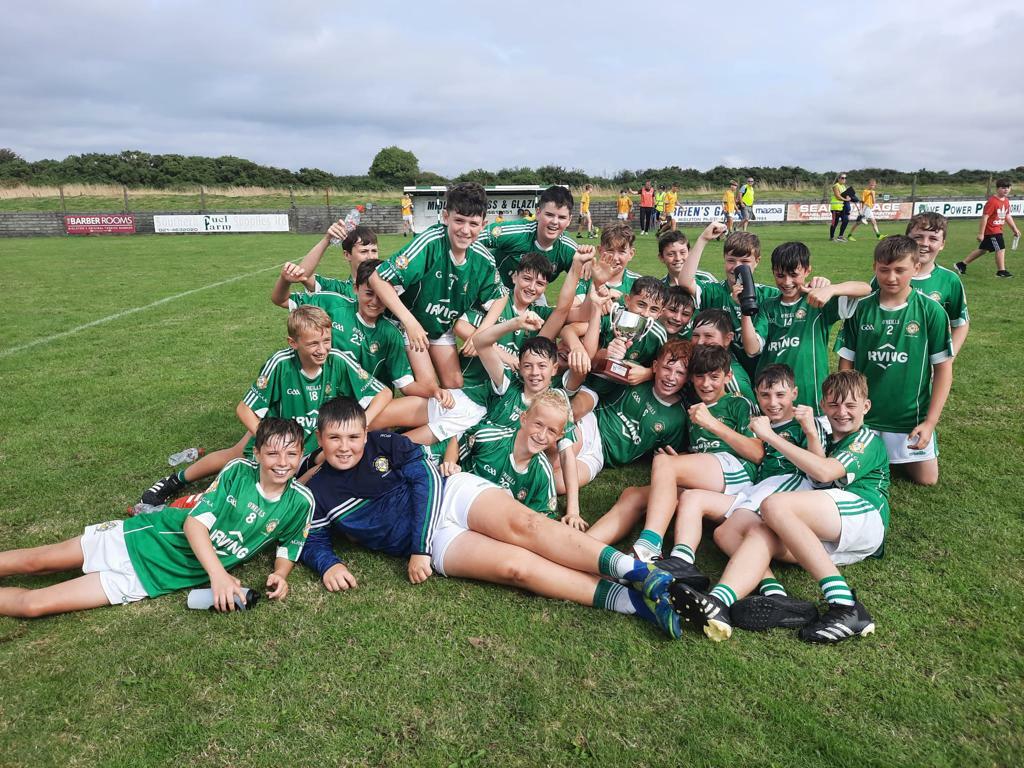 Aghada GAA Juvenile News
Hi folks. Whether you were in Dublin wearing Denim and a Stetson or at a wedding or a match somewhere or just enjoying some down time, I hope life is treating you well. Pride of place this week goes to our u13 hurlers who brought silverware back to the parish after a great final win. Also, our parish leagues are up and running with exciting games at u10 level with Hurling on Tuesday nights and football on Friday nights, with great action on show, so why not call down around 6pm to Rostellan and watch the future stars on show. Our adult footballers will be hoping to follow our senior ladies into a county semi-final when they take on Cill na Martra in Ballincollig on Saturday at 3.30pm the best of luck all involved. Our u12 hurlers are in final action in Ballinacurra on Sunday morning at 12.30pm against Watergrasshill and will be hoping to bring more silverware back to the parish and the best of luck to all involved here. So, check out our fixtures and please support where you can, remember when you support the club, you are the club.
U13 Hurling final Aghada 2-9 Cobh 1-10 Spirit, determination, and plenty of skill on show as a well drilled Aghada side got the better of our seaside neighbours Cobh in Ballinacurra last Saturday afternoon. Great credit to the management team who had the preparation down to a tee and our boys well-tuned in as the hard work on the training pitch over the last few years is paying off. These teams knew each other well, renewing acquaintances having played several games over the last few years and everyone involved knew it would be a close battle and so it transpired. Cobh were first off, the mark with a point from a free as we quickly equalised with a Shay Rooney strike. Centre forward Matthew Condon replied to another Cobh free with an exquisite strike from play and then corner forward David Murphy got in behind the defence, headed towards goal and blasted to the net with a quality finish. From there to half time, we were on top with our half back line in particular of Kaylan Cunningham, Sam Morgan, and Jake Morrisey a launch pad for many attacks as Matthew, Shay and Dara O’ Brien with a brace had us 1-6 to 0-4 ahead at the short whistle. The second half saw Cobh up the ante and took the game to us, bringing it back to a 1-point game with 4 white flags in a row as Rian stood tall between the sticks with Finbar Alcock and Rossa White mopping up everything in front of them. The introduction of Cathal Lowney and Cormac Cashman steadied the ship as Dara struck a long range free to settle the nerves. The shackles were off, and this was real toe to toe stuff while the work rate all over the pitch was excellent as Donncha Walsh, Conor Charles, Eoin O’ Donoghue, Robbie Oosthuizen and Eoghan O’ Shea all played their part in getting us over the line. Super sub–John Dorney gathered a high ball on the edge of the square and turned to billow the net with a rasping shot to turn the game fully in our favour. We were now 4 points up with time running out, but the drama was far from over when in the dying embers Cobh pulled a goal back to put the bare minimum between the teams again. Seven minutes of injury time were played as our lads refused to panic and when the shrill of referee Mary Swayne’s whistle brought an end to proceedings there were joyous scenes as Captain fantastic Sam Morgan raised the cup aloft and the parade made its way back to the parish and to Rostellan for more celebrations. Final score 2-9 to 1-10 Ath Fhada Abú.
Team panel & scorers Rian O’ Brien Higgins, Finbar Alcock, Rossa White, Eoin O’ Donoghue, Kaylan Cunningham, Sam Morgan ( captain) Jake Morrissey, Donncha Walsh, Conor Charles, Eoghan O’ Shea, Matthew Condon 0-2, Robbie Oosthuizen, David Murphy 1-0, Shay Rooney 0-2 , Dara O’ Brien 0-5 0-3f Canthal Lowney, Dylan Kearns, Cormac Cashman, John Dorney 1-0, Eoin Kirrane, Harry Burgoyne, Sam Ahern, Tim O’ Hanlon, Marcus O’ Loughlin.

U15 football shield semi-final Aghada 1-9 St Nicks 0-6 Great credit to both teams who put on a fantastic display of football in horrible conditions in Rostellan last Wednesday night as the rain fell by the bucket load all through the match. Great credit also to referee Pa Beausang for his handling of the game in such trying circumstances and the players responded with not one bad foul throughout the game. By the end it was the Aghada players who were singing in the rain and splashing around in the water that lodged on the pitch in scenes more akin to the national aquatic centre than a GAA match. We opened the scoring when centre forward Sam McAllister split the posts after a piercing run and then Isaac Oosthuizen broke through for point number 2. St Nicks soon levelled proceedings with 2 points of their own, before Isaac cut in along the right side-line and passed inside to the in-rushing midfielder Colm O’ Donoghue who palmed the ball to the net for a significant score in the testing condition. Our backs were all on top of their game with Eoghan Walsh, Dara O’ Concubhair and Cillian Falvey very prominent. Coming up to half time we embellished our lead further with fine points from Sam Mac and Cormac Walsh to lead at the short whistle 1-4 to 0-3. With no let up in the rain we knew this would be a tough contest all the way to the end and it took a smart save from goalkeeper Cormac Crowley to keep our noses in front just after the interval. Cormac Walsh put over a free and a superb score from out near the side-line as we kept up the good work rate all over the pitch. Colm moved forward to shoot narrowly over the crossbar and Cormac struck another free as we drove for home. Then with the darkening sky over head we scored our best and the last score of the game with a brilliant free flowing move ending with Isaac shooting over and we now have a final to look forward too, that we can face with confidence. Team & scorers Cormac Crowley, Pierce McLoughlin, Seán O’ Brien, Eoghan Walsh, Jackson Kearns, Dara O’ Conchobar, Cillian Falvey, Colm O’ Donoghue 1-1, Eanna Crowley, Tom Walsh, Sam McAllister 0-2, Adam Lewis, Cormac Walsh 0-4, Joe Connolly, Isaac Oosthuizen 0-2. Subs used Jack Kelleher, Ronan Norris, Fionn O Sullivan, Josh McCarthy.
U17 P2 football championship Aghada 1-9 St Michaels 3-9 Played under the Rostellan lights last Friday night in near perfect conditions we gave a great account of ourselves but came up just short against a fine St Michaels team. The Blackrock side took an early lead with a well worked goal and a few tasty points, but we hit back with a Cian Hego Hegarty white flag and a cracking James Hurley goal in a lively opening spell. Seán Santos O’ Sullivan was driving out from full back with authority as we had further points from Samuel O’ Driscoll and the hard-working Robert Dean after a penetrating run, but it was the Mahon side who led 2-4 to 1-3 at the break. We introduced Aaron Kearns, Conor Baxx and Stevie O’ Shea in the second half to good effect with David Wallace going to centre back and Seán O’ Callaghan moving forward. We had good scores from Robert and Stevie as John Walsh tipped over a goal bound effort as the Blackrock side were proving hot to handle. Hego hit over a series of good points for us, but we had to give second best on this occasion as St Michaels ran out deserving winners in the end. Team & scorers John Walsh, Conor Geary, Seán Santos O’ Sullivan, Evan Crowley, Noah Devoy, Seán O’ Callaghan, Fionn O’ Callaghan, David Wallace, Cian Hegarty 0-5, Samuel O’ Driscoll 0-1, James Hurley 1-0, Ronan Devoy, Joshua Halpin, James Motherway, Robert Dean 0-2. subs used Aaron Kearns, Conor Baxx, Stevie O Shea 0-1
Congratulations to East Cork Golf Club and the players from this parish who represented them as they won the All Ireland Jimmy Bruen golf competition in Slieve Russell golf club County Cavan last Saturday. Juvenile players Hugh Mulcahy, Eric Cunningham and Tomás Condon were part of the winning squad as were former players Scott Coyle Garde and Seán Harrigan a fantastic achievement, sport takes on many shapes and forms and being involved in sport is a life learning experience, well done to all involved.
Congratulations to Aghada senior ladies football team who are into the County semi-final after an impressive win against Inch Rovers last Sunday. The results have been excellent this year, well done to all involved and keep it going girls.
Well done to Fionn O’ Connor, Ronan Murphy, Seán O’ Callaghan, Tomás Condon, and Noah Devoy who have all made this years Midleton CBS Harty panel. All good enough to make a big impact, so the best of luck lads and drive on.
Fixtures
Sunday 18th U12 hurling final Aghada v Watergrasshill venue Ballinacurra 12.30pm
Sunday 18th U17 C-3 hurling quarter final Aghada v Ballincollig venue Ballincollig 3pm
Be Seen Wear the Green
Slán go fóill.

Aghada GAA Juvenile NewsHi folks, hope all is well and ...

A Chara, Whisper it quietly but September is here and the...