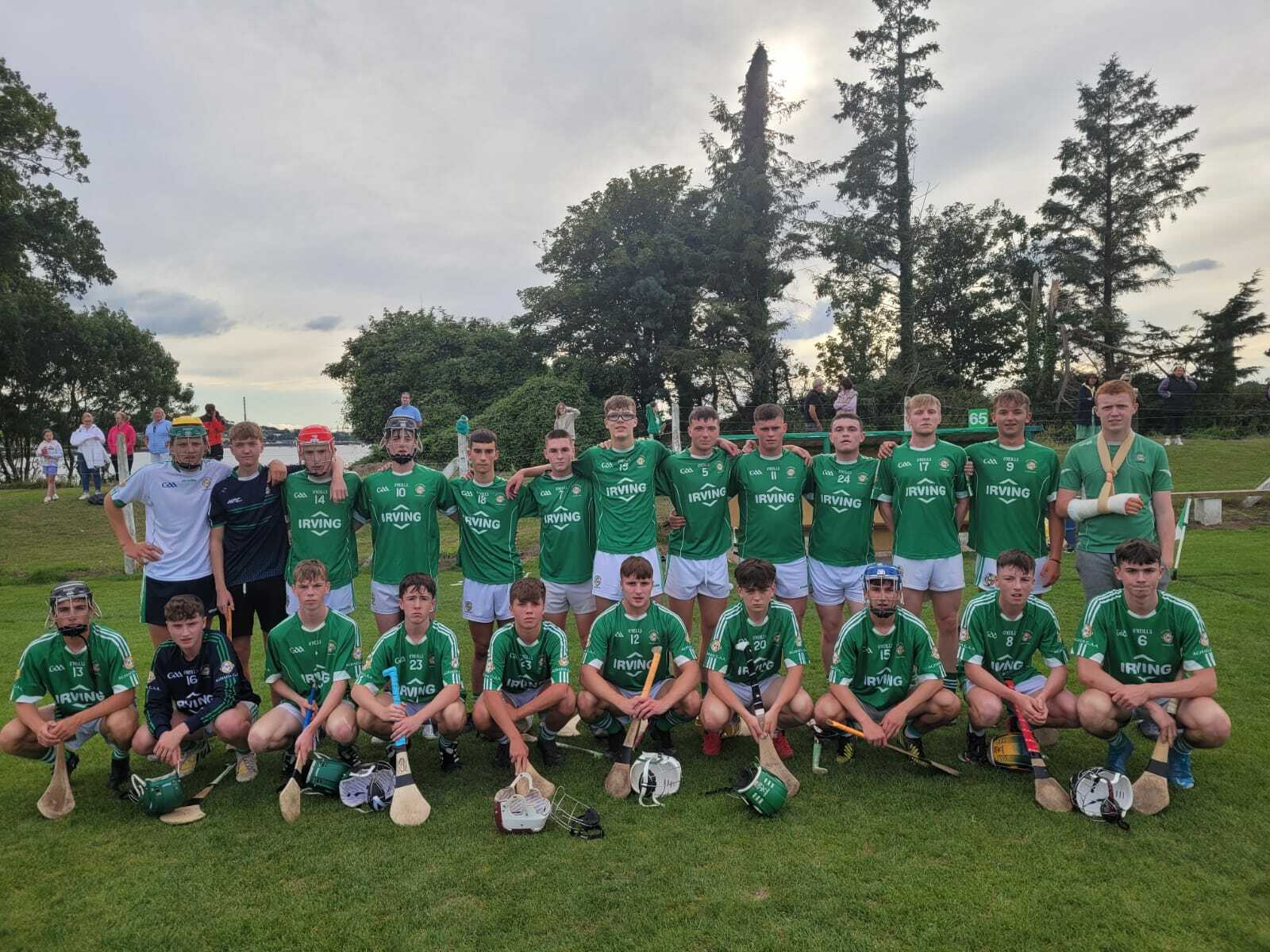 Published: about 2 months ago

Hi folks, hope ye are all keeping cool and hydrated as you enjoy the sizzling sunshine, of course you can always enjoy a cool drink or a delicious ice cream at the Sideline café after going for a walk in the cooler surroundings of the woods or a quick dip in the nearby sea, so much on offer in the beautiful surroundings of the idyllic Rostellan GAA grounds. You could be forgiven for thinking you were in Australia like Summer Bay or Bondi beach as the continuous stream of surf boards and camper vans descend on the parish and head to a nearby beach. Remember to always stay safe, act responsibly and stay close to the shore when entering water. A dense fog descended on Monday morning the day after our adult hurlers lost out to Blackrock in our second group game but the fog quickly lifted and we go again, as it’s still all to play for and we now enter proper knockout championship from now on with an appetising final group game against fellow East Cork team Lisgoold to look forward to but before that another must win game for our adult footballers who take on city side Na Piarsiagh this Sunday at 4pm in Carrigtwohill and your support here will once again be greatly appreciated, also a reminder that the Iron man event is on next weekend so check locally for road closures that will affect travelling times.

We had two very impressive wins in championship hurling last week our u15s coming out on top against Ibane Gaels and our minors accounting for St Finbarr’s and well done to all involved here.

We had fantastic representation on Cork squads last weekend with Colm O’ Donoghue, Isaac Oosthuizen, Jude Devoy, Tomás Condon, and Seán O’ Callaghan all playing their part at u15 and u16 level, well done lads ye are doing the club proud.

Hard luck to Hannah, Aoife, Ali, and all in the Cork Camogie squad who came up just short in a thrilling All Ireland decider last Sunday.

Our u11 hurlers hurlers enjoyed a fabulous day out in Semple Stadium Thurles last Thursday. They played 3 games against Abbeydorney from Kerry, Moneygall from Tipperary and Kilsheelan Kilcash also from Tipp, while also getting a stadium tour and some sound words of advice from Craig Morgan the victorious u20 all Ireland winning captain and member of the Tipp senior panel. Hopefully there will be many more outings for these young players in Tom Semple’s field in the not too distant future,

“So when the sun beats down and melts the tar up on the roof” a line from the song Under the Boardwalk by the Drifters and covered by the actor Bruce Willis, let ye be careful out there Beneath the Burning skies of Climate Armageddon.

A thunderous second half from our lads brought us a comfortable victory in the end against a gallant Barryroe/Argideen Rangers amalgamation on a warm dry evening in Rostellan. The first half was a tense affair with both sides battling for supremacy. We got the perfect start with full forward Jack Linehan latching on to a through ball and rattling the net with an emphatic finish. Centre forward Isaac Oosthuizen was in tremendous form from play and frees and his accuracy pushed us further in front before Ibane Gaels opened their account in the tenth minute. Both sides went on to trade scores thereafter with Jack and Isaac contributing again to leave the half time score 1-7 to 0-8 in our favour at the break although we were indebted to supreme goalkeeper Adam Lewis who made a series of point-blank saves. With a strong work ethic all over the field we stepped up our performance in the second half to blow away our opponent’s challenge. In Jackson Kearns who was just back from injury we had a top performer in defence, and we went about our business diligently as the scores flowed, more points from Isaac, Jack L, Jude Devoy and Jack Mulcahy pushed us clear before Jude with great anticipation pounced for goal number 2 on the 22nd minute to finally quench the Ibane Gael challenge. We conceded a late goal but had plenty in reserve to run out winners to keep on track for the knockout stages and our unbeaten run intact. Team & scorers Adam Lewis, Jackson Kearns, Jack Buckley, Cormac Crowley, Josh McCarthy, Colm O’ Donoghue, Cian Moore, Sam McAlister, Tom Walsh, Jude Devoy 1-1, Isaac Oosthuizen 0-10, Jack Mulcahy 0-1, Cormac Walsh, Jack Linehan 1-2, Seán O Brien. Subs used Joe Connolly, Mattie O’ Leary, Austin Schoeman, Cillian Burke, Alex Buckley.

We welcomed the famed Allez Les Bleus Togher club to Rostellan last Friday night in what transpired to be a ding dong encounter between two evenly matched teams. In midfielder James Hurley we had an ace in the pack who linked the play intelligently from midfield while also contributing handsomely on the scoreboard with an array of well executed points. Both sides exchanged points in a pulsating first half with tremendous battles all over the pitch with Evan Crowley and Seán O’ Callaghan hurling confidently as white flags from James H 0-3, Stevie O’ Sheá, Aaron Kearns, Samuel O’ Driscoll and Cian Hego Hegarty keeping us in touch before Stevie got in behind the defence to billow the net to give us a major confident boost coming up to half time. However we were rocked on the stroke of half-time as the Barrs made a breakthrough of their own to find the net and take the lead 1-7 to 1-9 at the short whistle. We needed to stand up now and be counted especially as we were down a few influential players through injury and to a man they stood up and played crisp, direct hurling and limited the Barrs supply lines, as they failed to score from the 16th minute on in the 2nd half. Points from James H, Robert Dean, Samuel, Hugh Mulcahy and Tomás Condon had us in the ascendancy as we stormed into the lead, a lead we would never relinquish, and after a blinding John Walsh save the boys were roared on to the finish by the large Aghada support, to record another fine win to back up the equally impressive first round victory against Carrigtwohill. Team & scorers John Walsh, Evan Crowley, Seán Santos O’ Sullivan, Conor Geary, Aaron Kearns 0-1, Seán O’ Callaghan, Cian Hegarty 0-1, James Hurley 0-5, Robert Dean 0-1, Hugh Mulcahy 0-3, Samuel O’ Driscoll 0-2, Callum Roberts, Tomás Condon 0-1, James Motherway, Stevie O’ Shea 1-1. subs used Noah Devoy

On a hot Monday evening we travelled to Castlemartyr to take on Kiltha Óg in the u12 football league. With holiday season in full swing, we were minus a few players and found the going tough against the strong home side, although up against it this did not deter our lads and they gave a great account of themselves putting their bodies on the line time and time again and playing attractive football when in possession stringing some nice passages of play together. Corner back Finbarr Alcock typified the teams spirit making 2 spectacular goal line clearances. Midfielder Jack Kelleher notched 1-1 in a typical lung bursting display and Dara O’ Brien and Dylan Kearns were defending superbly on the front foot with David Murphy and Trystan Pomphret landing well worked points, however when Kiltha hit a purple patch they were hard to stop and claimed the win 1-3 to 2-8 in a score line that did not do justice to the Aghada teams fighting spirit.

Aghada GAA Juvenile NewsHi folks, hope all is well and ...

Aghada GAA Juvenile News Hi folks. Whether you were in D...