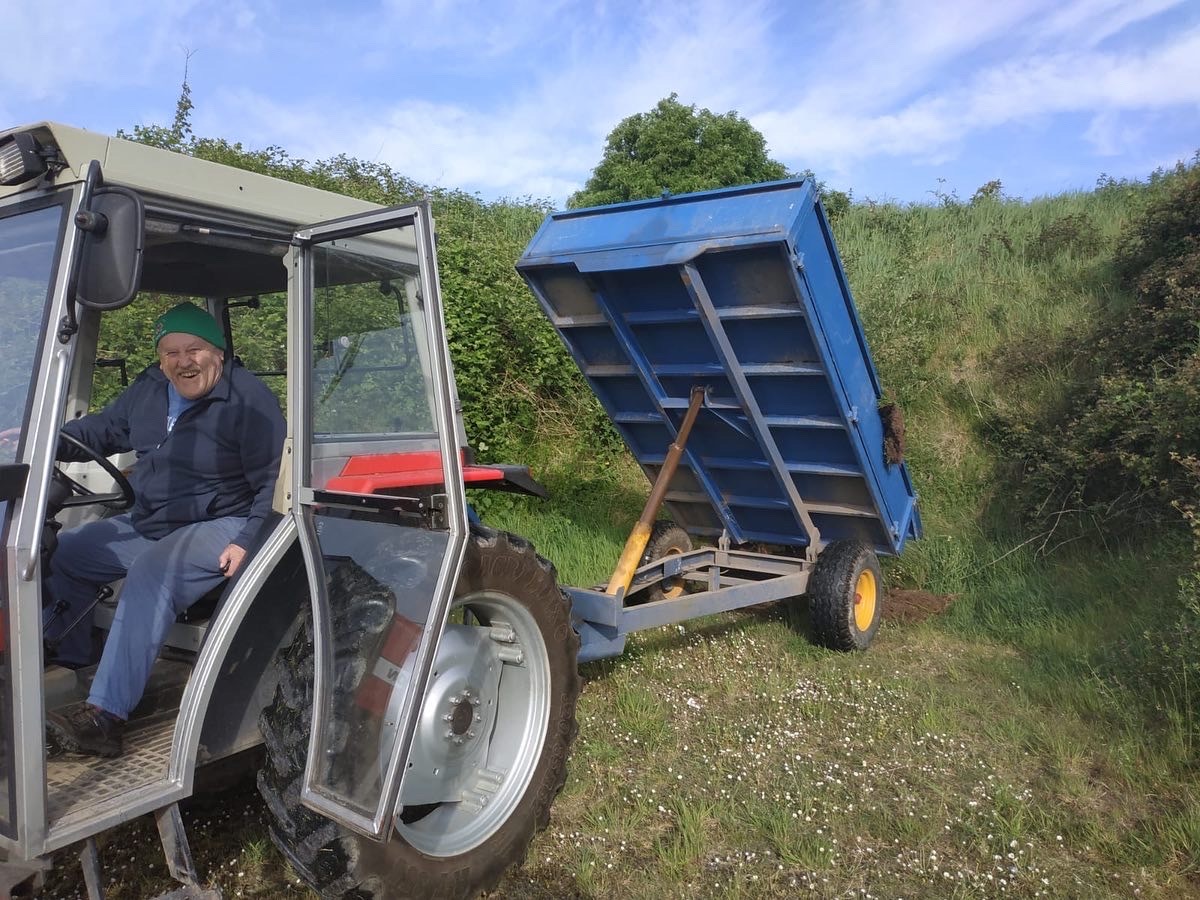 As many of you will have noticed, our club grounds in Rostellan have been a hive of activity recently. Some very exciting projects have begun over the last few weeks and here is an update on these.

At the start of this year, work began on getting a new club coffee shop established in our grounds. It is hoped that this outlet will give parents and visitors to our club a great opportunity to interact with each other and have a chat. It was decided the coffee shop would be located in the kitchen in the main clubhouse. The existing window would then be replaced by a hatch where coffee/tea etc. would be served from.

Deciding where to locate the Café was the easy part. Now, plans had to be drawn up on how to make the coffee shop work. Andrew O’Brien stepped up here and used his expertise to design a beautiful modern coffee dock that hotels would be jealous of! Once the drawings were finalised, work commenced with several volunteers giving up their time to make this great idea a reality. Fair play to Seanie O’Keeffe, Aaron Stafford, Kevin Alcock, Martin Ryan, John Connolly, Ray Murphy, Anthony Connolly and John Motherway who all put in long hours to get the work completed. There has been well over 200 hours of members time and skills put into the refurbishment of the kitchen which lives and breathes our values as a voluntary organisation.

Once the heavy work was done, the shop needed to be kitted out with fridges etc. A big thanks to Damien Keohane who helped out massively here. Thanks also to Brian Martin who captured a lovely drone photograph of our complex that is on the wall of the café. There was one final step… the name of the Café. A call was put out to locals of the parish to help us name the café and ye all responded in yere droves with 105 name suggestions landing at the door. After a successful poll which was held on social media, the new Café name that emerged victorious was…….drumroll……… THE SIDELINE CAFÉ. A fitting name I think we would all agree.

There will be benches located outside the coffee shop and I’m sure there will be plenty of stories exchanged here over the coming years. The Sideline Café will open VERY soon so keep an eye on our social media channels for the official opening date. Helen Walsh has been the driving force of this venture for Aghada GAA and if you would be interested in helping out in the Café email Helen at aghadagaacoffeeshop@gmail.com . Well done to Helen on the huge effort put in so far. Finally, all funds raised in the coffee shop will go to furthering developing our great club. 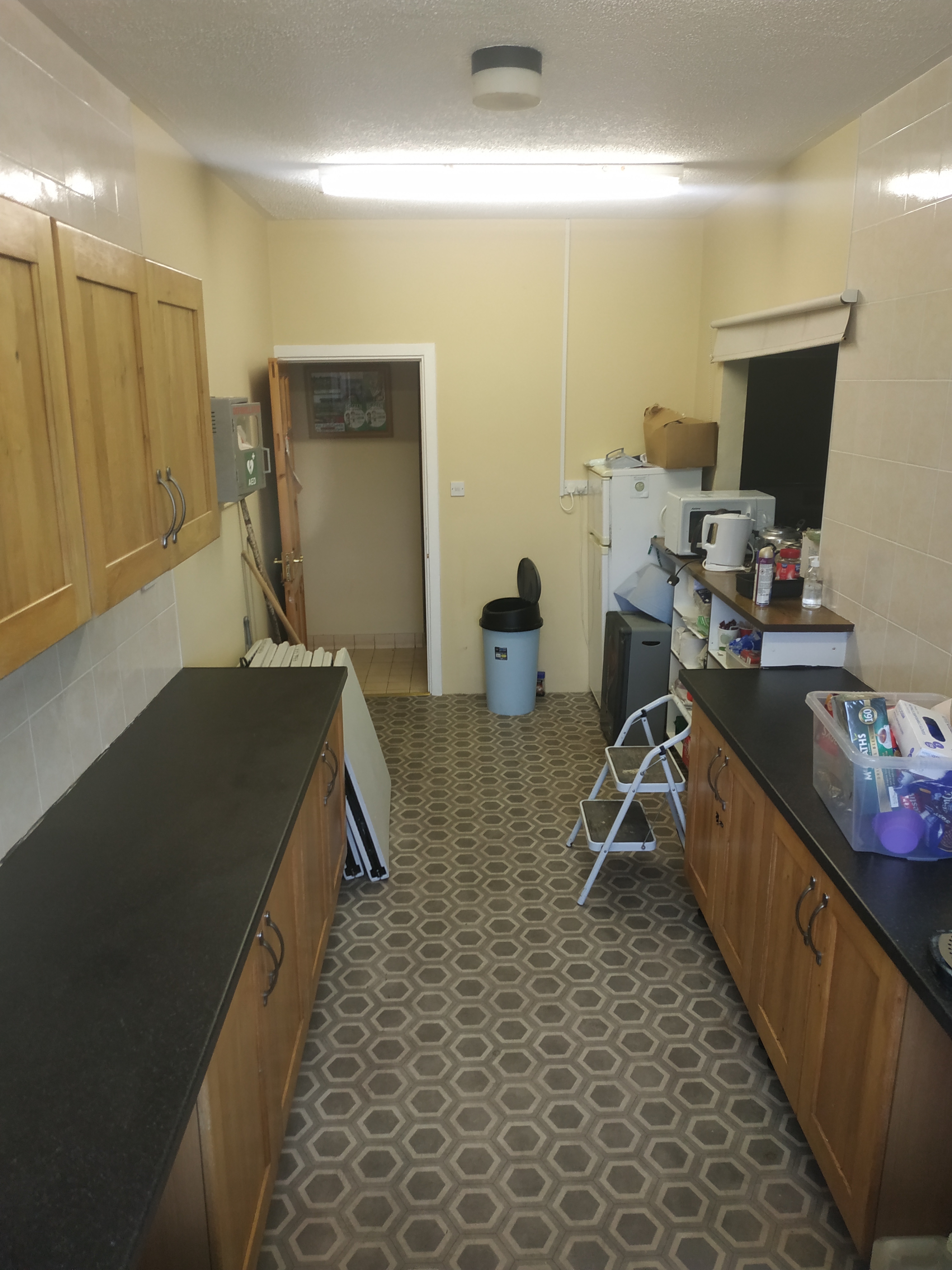 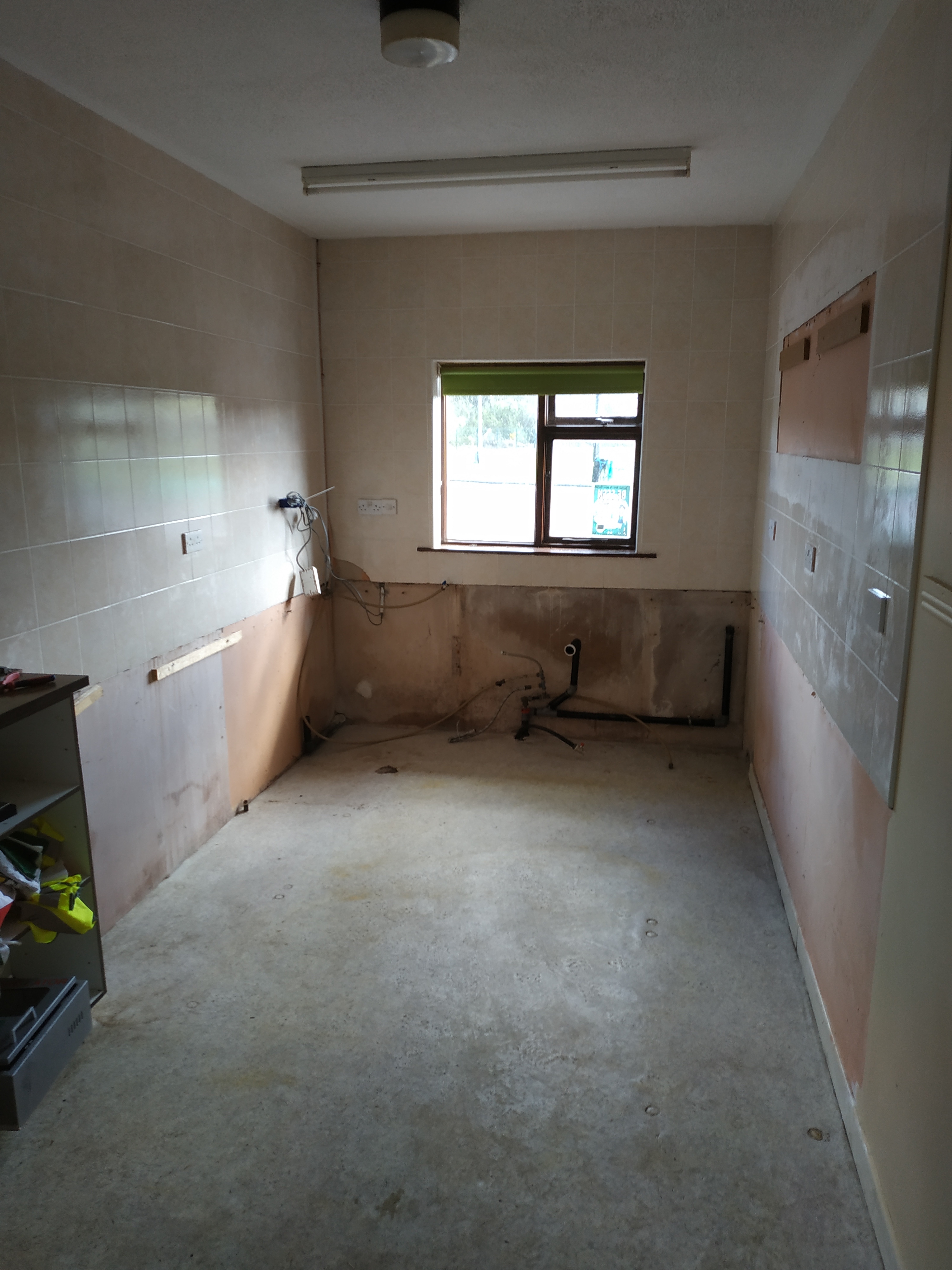 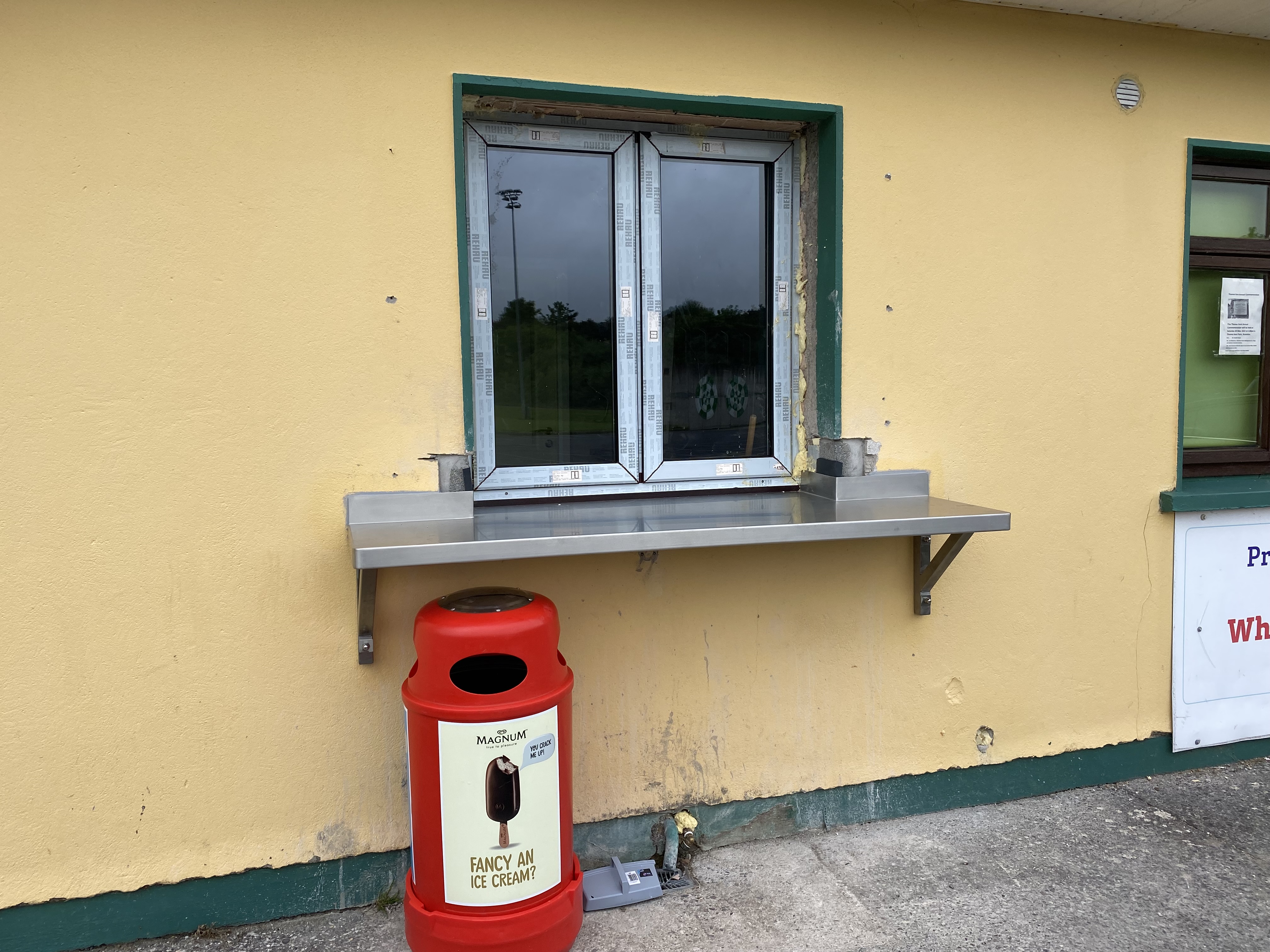 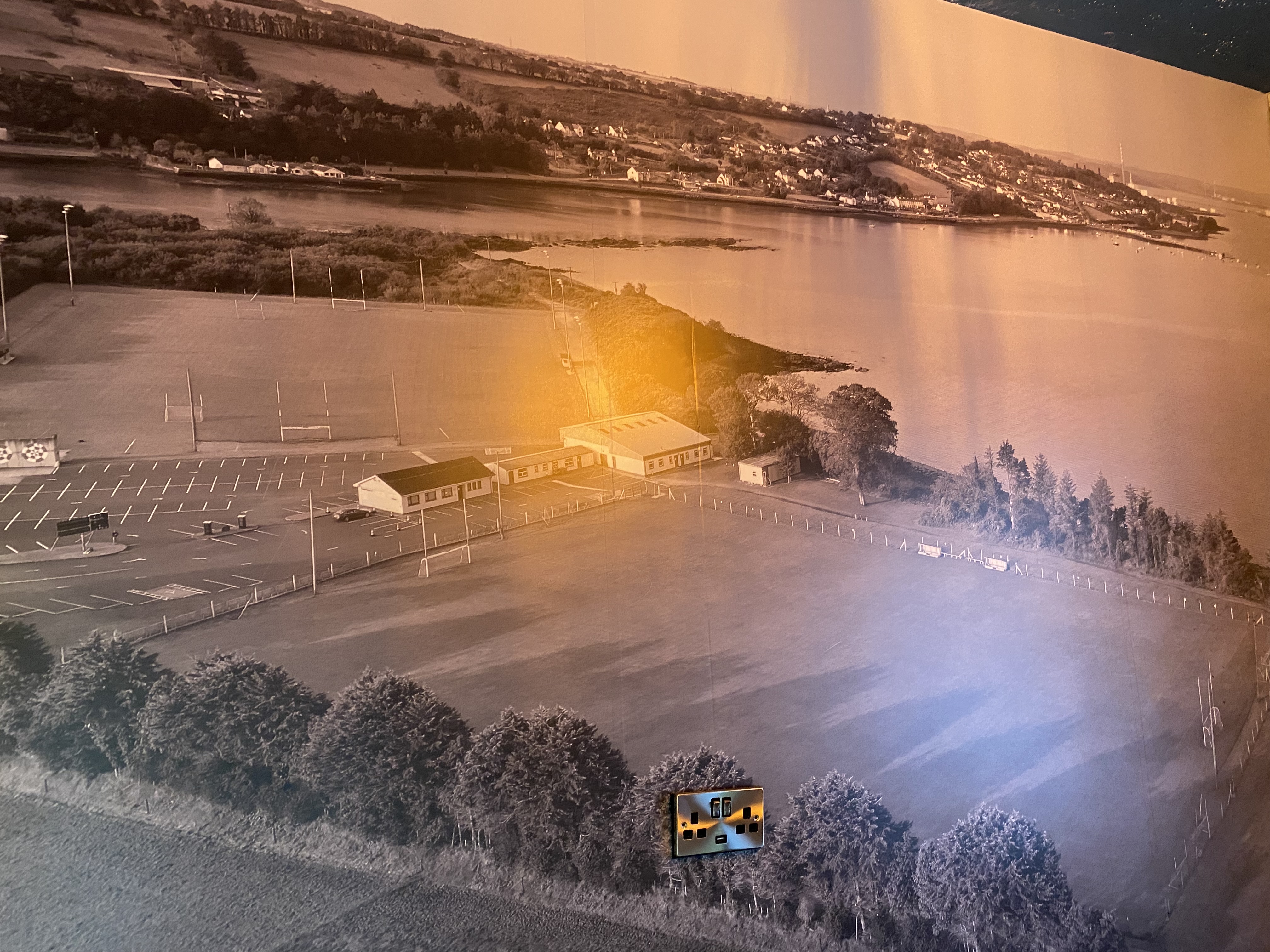 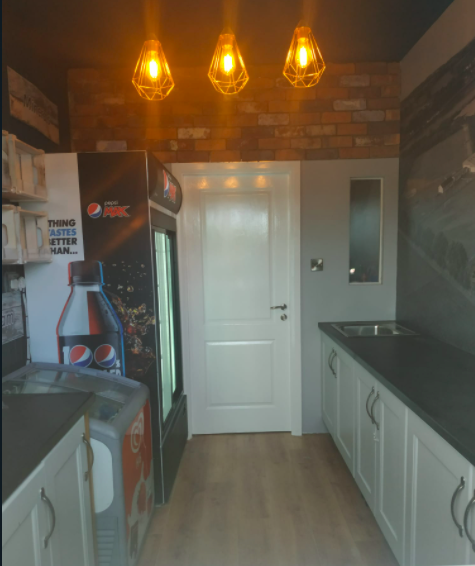 As mentioned above we are going to have composite benches located outside The Sideline Café. These are hard wearing plastic benches that members of our club will be able to enjoy for at least ten years. Two businesses have already offered to buy a bench each and we would like to open this up to other businesses or members who may like to sponsor a bench. Any member, family or business who would like to sponsor a bench, please contact Pa O’Connor on 086 385 8469. Sponsorship of a bench will be recognised by a small stainless steel plague that will be on the side of the bench which will have the name of the member or business engraved on it if accepted by the sponsor.

I think everyone would agree over the last few years during the pandemic we all began to appreciate how important it can be for our health to get out for a walk in our busy and frantic lives. Once upon a time, a coach of mine in Aghada gave a team talk on how lucky we were to live where we live. As 16 year olds I’m not sure we understood what he meant, afterall we were more interested in the match that followed the team talk! But during the pandemic, I think we could all take something from this coaches words. We live in a beautiful part of the world with our club grounds located in a scenic area that is the envy of clubs countrywide.

Well now, even more of us will be able to enjoy our great grounds and associated scenery. Work has commenced on a walking track that will loop around our full complex in Rostellan stretching almost 1.5km in length when completed. Thanks to Georgie O’Brien, Adam and Ross along with Tommy Foley who began this project for our club last week. We hope to have the first phase of the walking track completed in the coming weeks. When completed, this will be a fantastic amenity for all our community to enjoy. Rumour has it, some team managers are eyeing up the track for pre-season training next year… 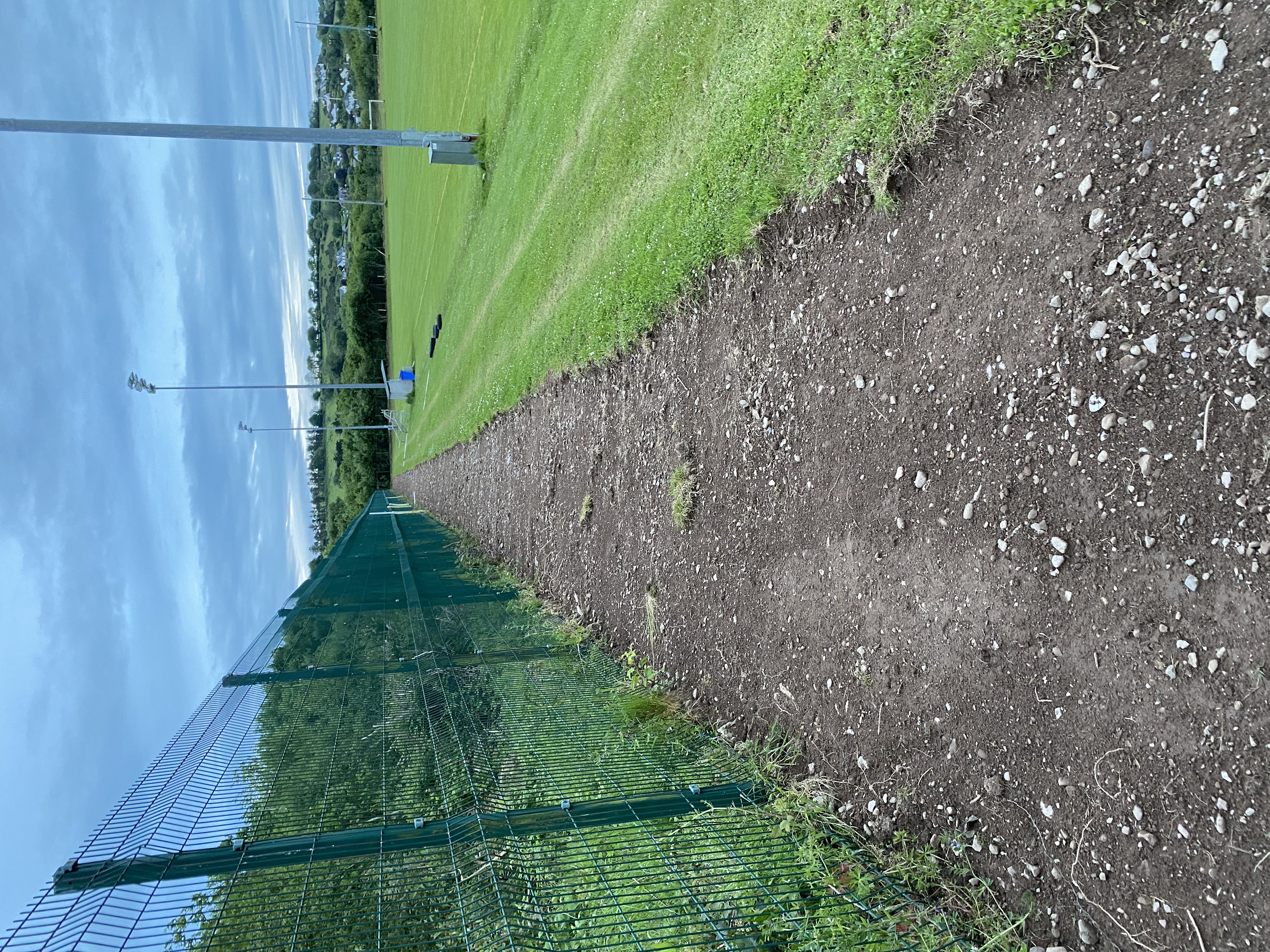 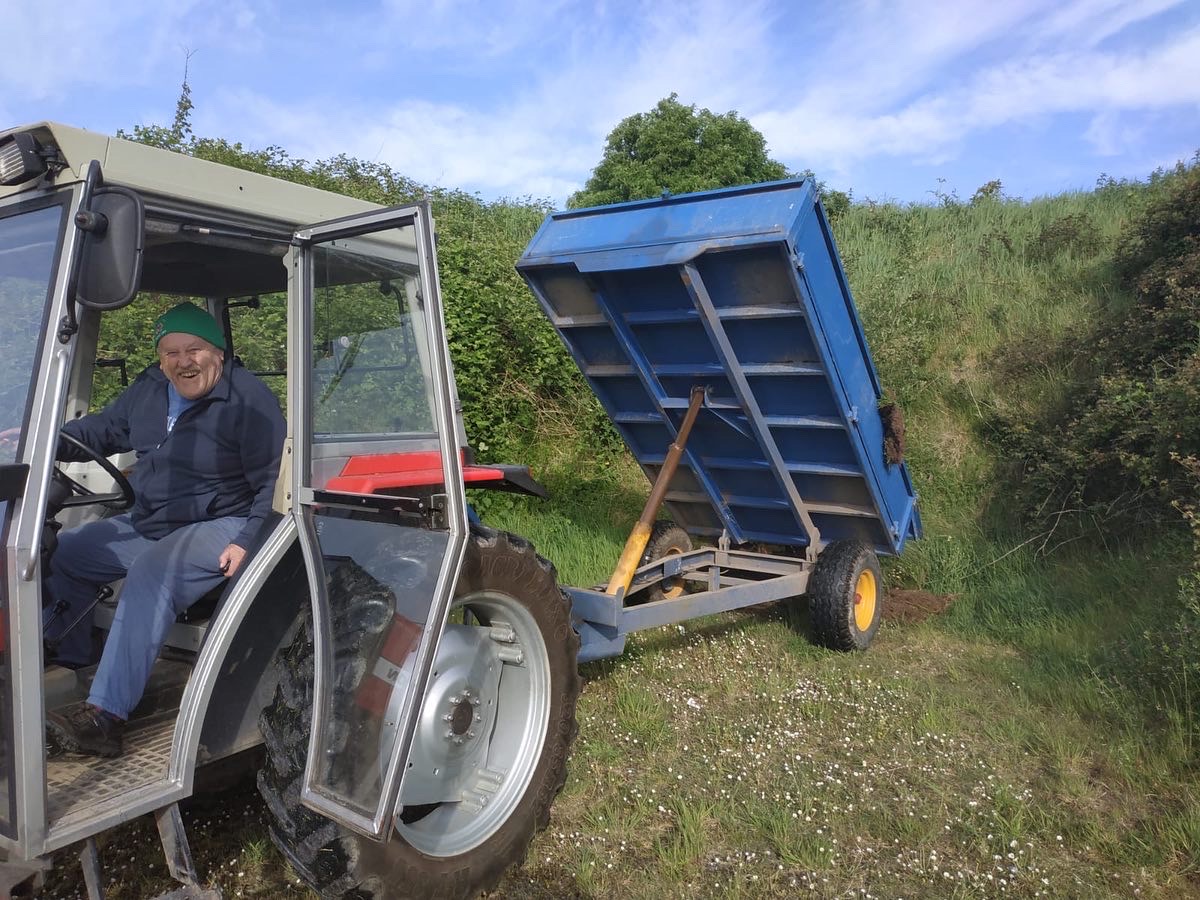 A huge thank you to Pádhraig & Mary O’Loughlin, Brendan Crowley, Diarmuid Mulcahy and Conor O’Driscoll who have donated a new defibrillator to the club. This is an essential item in all clubs and communities these days and our new defibrillator is located where the old one was at the door to the main clubhouse as seen below. 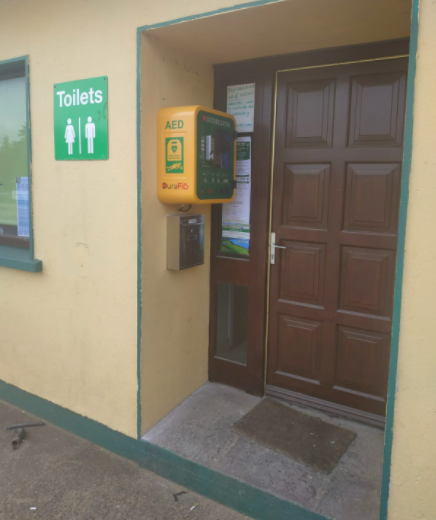 The club has invested in a MC system with speakers which will hopefully add to the atmosphere on match days and training days. Speakers will be erected outside the main clubhouse shortly which will allow music and key announcements to be made. You’d never know Johnty might give us some half time entertainment with a song or two!!! 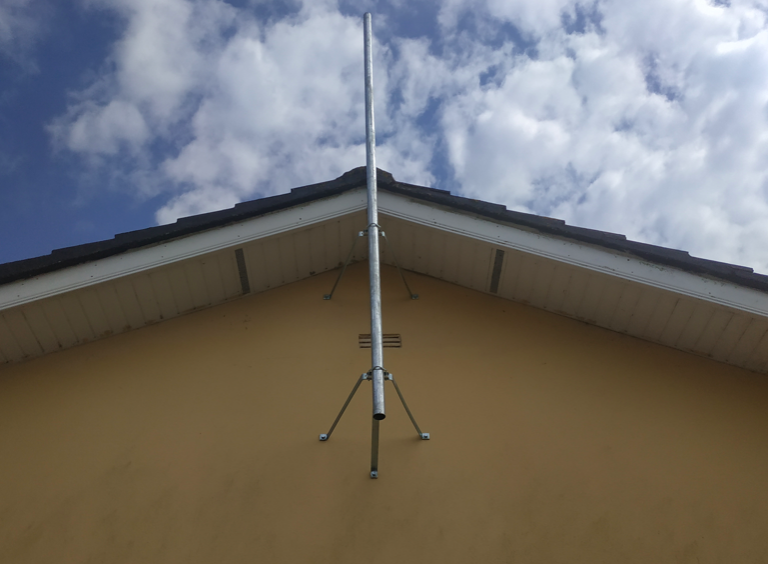 As outlined above previously, our grounds are located in a beautifully scenic area. To make best use of this scenery, we are going to move the location of our storage containers and open up the area behind the main dressing room. We are then going to put down some hard core here which will allow us to make best use of the area. Watch this space for more details on this over the next few weeks.

20 new flag poles are going to be erected in the forest pitch in the next two weeks. This will bring great colour and club identity to the grounds.

During a recent storm, one of the nets behind the goals in the quarry pitch was badly damaged. This could have had a serious knock on effect to our games if it had not been fixed quickly. Well done and thanks to Declan Devoy, Kevin Alcock and Aidan Kelleher who spent a day below in the field fixing the net off them famous red cranes. Not alone did they do this but they also did a few more general jobs using he cranes around the grounds on the day. Thanks lads.

The clubhouse now has WIFI installed. Thanks to Mattie O’Connor for organising and installing this. Having WIFI readily available will be very useful for meetings in the club along with ensuring good connection for live lotto broadcasts. Myself and John Murphy won’t have to listen to Johnty on about bad connection anymore!!!

One of the partition walls in the portacabin has been removed. This has made a huge difference to the size of the room in here and will allow the club to make best use out of this building going forward. Thanks to Brian Morrissey who put in a lot of work here. 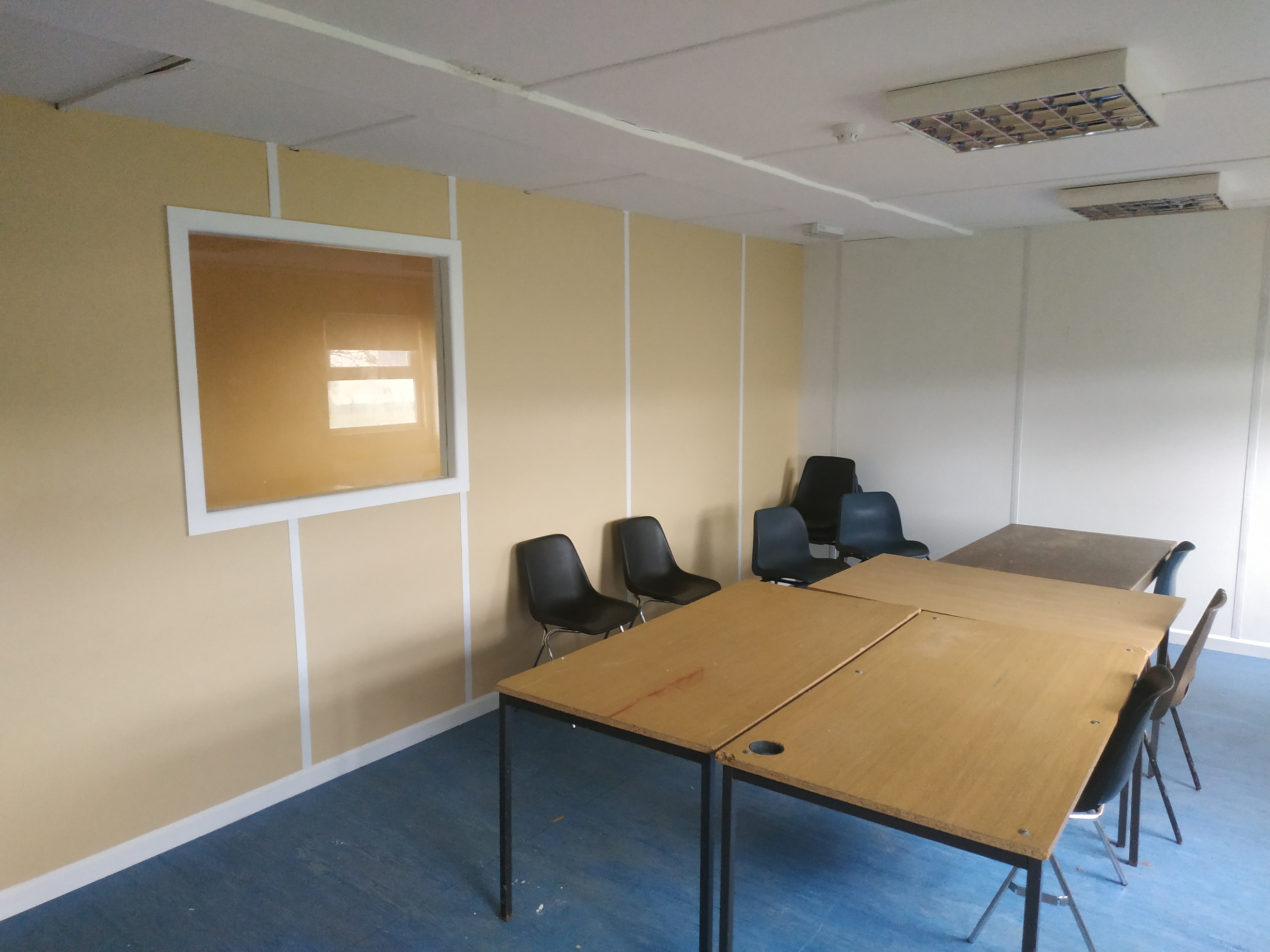 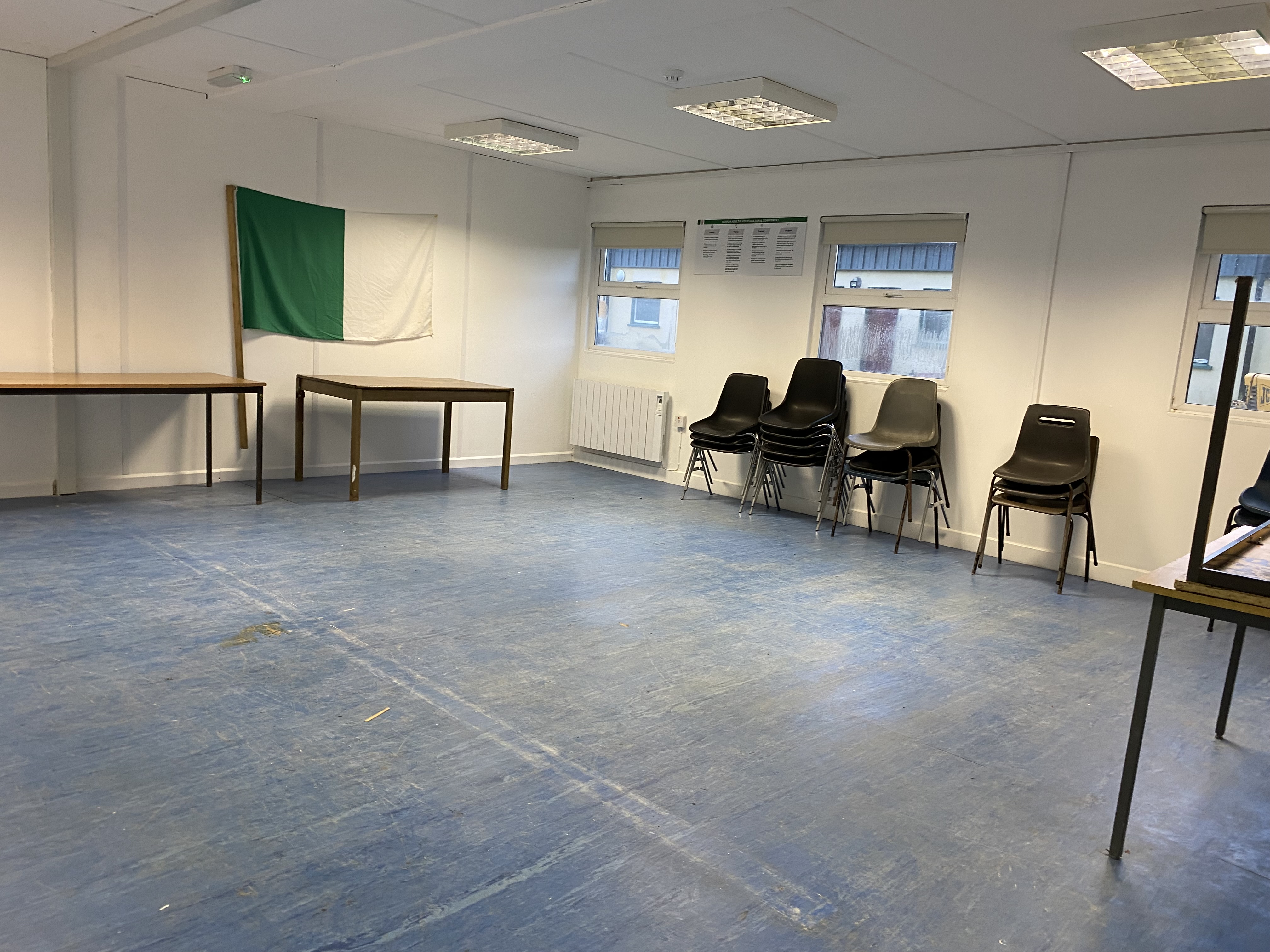 Naming of our underage teams:

A competition has been launched recently where a leaflet has been given to each of the three primary schools in the parish. The aim of the competition is to create a name for underage teams. This is a joint venture between Aghada GAA, Aghada Camogie and Aghada LGFA. All submissions must be returned by the 27th of May (Friday). Get your thinking caps on! 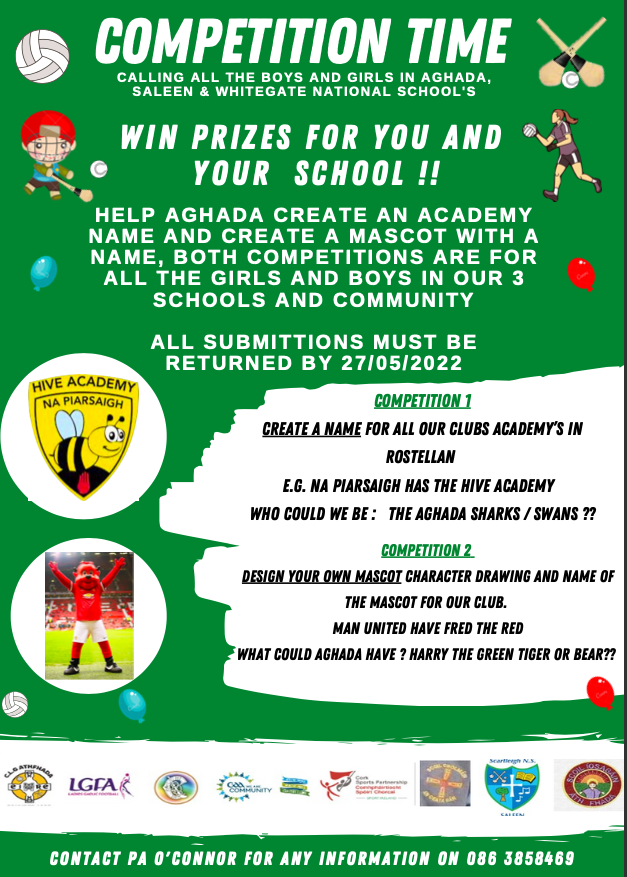 This fantastic initiative has been set up in our club and kicks off this Saturday at 11:30AM in Rostellan. Everyone is welcome.

GAA for All is a family of initiatives in the GAA encompassing Wheelchair Hurling and Camogie, Football for all, Fun and Run, “All Star” Inclusive clubs, Cúl 4 All / Cúl Eile Camps and intercultural activities. Well done to Joel Pett, Brid Kenny, Linda Good and Gillian Berry who have been integral to getting this initiative off the ground. Best of luck on Saturday morning!

We now have our own postcode for our club grounds in Rostellan. It is P25 P6F8. Put it into your phone, you’d never know when you might need it.

Our intermediate footballers face Kanturk Saturday evening at 4pm in Rostellan. This is a rematch of last year’s county semi-final where we lost out narrowly. The lads have been training well all week and will be boosted by the great win against Russell Rovers last weekend in the hurling league. Get down and show your support for the lads if you can. 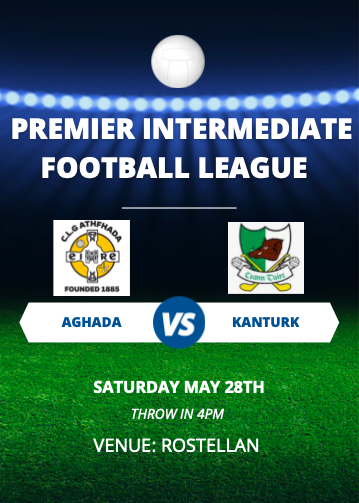 This week’s lotto jackpot stand at €9,250. Tickets are available in all the outlets listed below and online at aghadagaa.com

The club lotto is a great way to support Aghada GAA and also give yourself a chance to win a few quid! If you’re not in you can’t win as they say!

Tune in Thursday evening at 9:30pm on our Facebook page where the draw will be shown live along with some tunes and a song from club president John Motherway.

The club would like to express its condolences to the family of Margaret O’Brien who passed away during the week. Margaret was a loyal lotto ticket seller for the club over the years and will be greatly missed by all who knew her.

The club would also like to express its sympathies to the O’Shea family on the untimely passing of Niall. Our thoughts and prayers are with Niall's family and friends at this sad time.

Finally, I think it is worth noting that the above developments in our grounds in Rostellan would not be possible without the support people give to our fundraising initiatives be it Rebels Bounty, our club lotto or other fundraising activities. Thank you to everyone who has supported these fundraising initiatives down through the years and hopefully many more will join into the future.

That’s it for now. Keep an eye on social media for any updates regarding the opening of The Sideline Café.