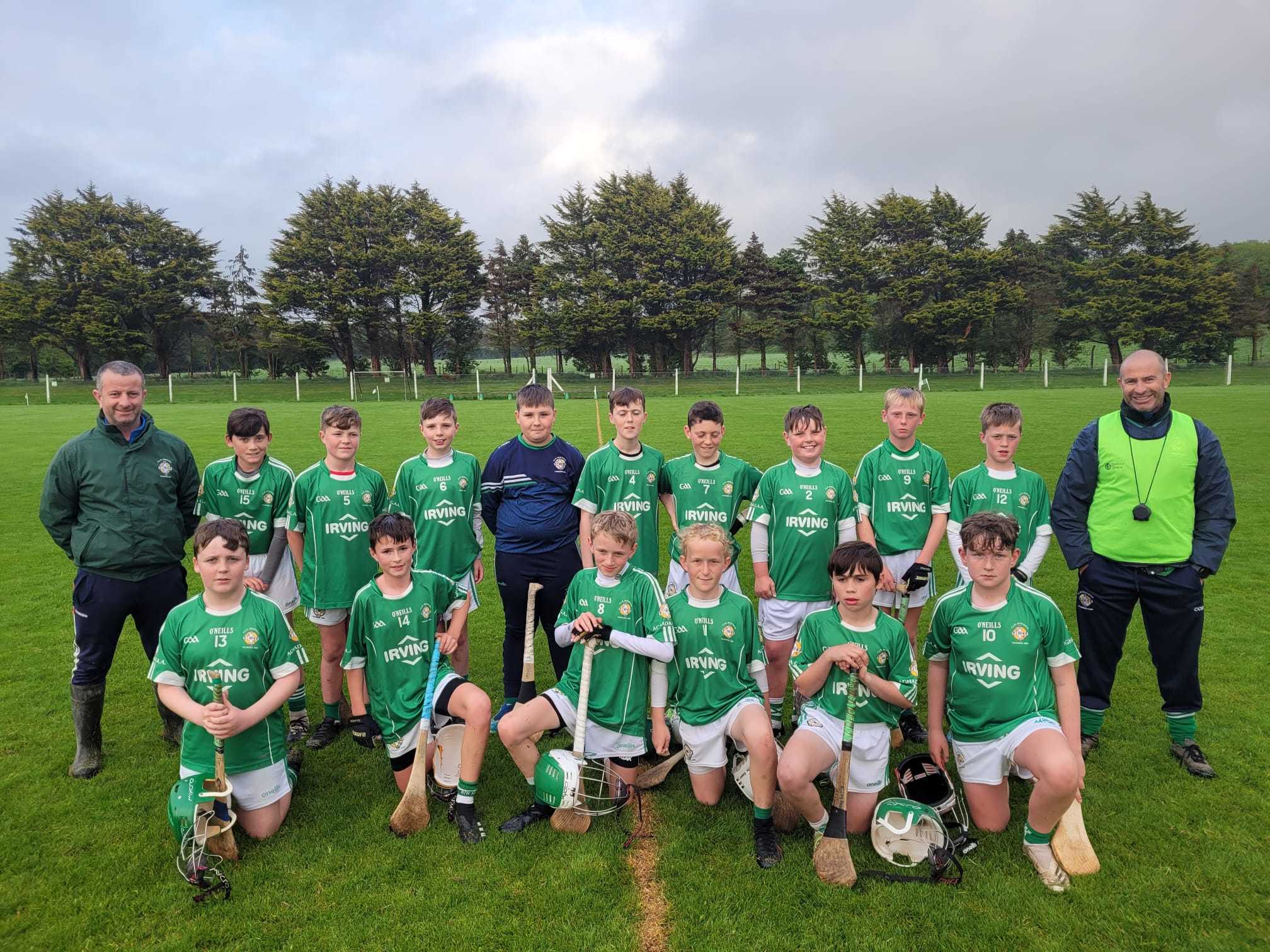 Hi folks, hope the world is treating you well, the exciting project that is the Aghada GAA club coffee shop is nearing completion. This venture will be exclusively run by volunteers and the proceeds will go towards future club developments and now the organisers are looking for your help in naming the coffee shop. So put your thinking caps on and send your ideas to aghadagaacoffeeshop@gmail.com and the place could end up as famous as the Central Perk café in that famous sitcom Friends in New York city.

Our U15 footballers took the road to Killeagh once again to take on the home side fresh from their win over the same opposition in Féile the previous weekend. This turned out to be a much easier affair with our lads on fire and rattling in 8 goals in a complete team performance. The home side started the better and raced into a 2-point lead before our boys seized control with a well taken Jack Linehan goal and the floodgates opened further scores from the impressive Andrew Murphy with a hat-trick and he had 3-3 on the board before half time another from Jack and points from Isaac Oosthuizen and Cian Moore had us in a comfortable position at half time leading 5-5 to 1-3. The second half followed a similar pattern with no let up from our lads as Jack completed his hat-trick and ace substitute Adam Lewis bagged a brace of well taken goals as points from Cormac Walsh and Cian Mu8oore saw us ease to a comprehensive win 8-8 to 1-7. Team panel Jago Evans, Pierce McLaughlin, Eanna Crowley, Sam McAllister, Josh McCarthy, Dara Conchubhair, Seán O Brien, Jude Devoy, Colm O’ Donoghue. Andrew Murphy, Isaac Oosthuizen, Ronan Norris, Fionn O’ Sullivan, Jack Linehan, Cian Moore, Adam Lewis, Nathaniel O’ Driscoll, Cormac Walsh.

Three in a row for our U12 hurlers with a mighty display against near neighbours St Colman’s the amalgamation of Cloyne and Russell Rovers in a damp Rostellan on Monday night. The rain that fell all day long drifted out to sea and the sun even came out as the game ended and it was certainly our lads who were smiling brightly when the final whistle sounded. We were on the front foot from the word go but were finding it hard to put possession into scores and it was Colman’s who hit the front when a rather fruitious high ball made its way to the net. We responded with a couple of Dara O’ Brien frees and an excellent Jack Kelleher effort from midfield. Dara knocked over another couple of points before we finally got the goal we deserved when a spectacular David Murphy shot from out on the wing found its way to the net. It was obvious at this stage that the team meant business as they were hurling with authority the six backs were well on top with Finbarr Alcock, Dylan Kearns and Seán Walsh commanding in the full back line Cormac Cashman, Donncha Walsh and Eoin Kirrane forming a strong half back line with Eoin in particular majestic in all he surveyed. The midfield of Cathal Lowney and Jack Kelleher was full of running and endeavour the half forward line of Harry Burgoyne, David Murphy and Darragh Callanan linking the play well while running intelligent lines and the full forward line of Tim O’ Hanlon, Dara O’ Brien and Sam Aherne menacing throughout. We led by 1-7 to 1-1 at half time and were full value for the six-point lead. The second half had us setting the scoreboard alight although Colman’s did strike for a well taken goal and our top netminder Rian O’ Brien Higgins had to be alert to keep out a 20-meter free with a smart stop. David hit the net twice with great strikes and Sam gave the goalie no chance with a firm shot as Dara O’ Brien was putting over an array of good points from play and frees and when the final whistle sounded it was the boys in green who were jumping with glee after a resounding 4-12 to 2-2 win.

We came up just short losing by the narrowest of margins in a thriller away to Kiltha Óg in Dungourney last Monday night, when a draw would have seen us progress to the semi-final in the U14 football league. Trailing by 2-4 to 0-1 at half time our performance was well below par, but that was all to change in the second half as we hit top gear with goals from Jack Mulcahy, Max Daly, Josh McCarthy, and Cillian Burke that had us level in the closing stages. Both teams gave it their all in search of a winner and unfortunately for us it was the home side who broke away to snatch victory with virtually the last kick of the game to leave the final score 4-4 to 2-11. This was a great effort by the lads and will stand them in good stead for the championship opener against Glenville next weekend.

David Creedon and Aiden Kelleher were part of the Cork masters football squad beaten by Waterford last weekend a bit of a rarity in football, although i was at a Cork U21 football Munster semi- final in Walsh Park in 2003 when Cork were also beaten by Waterford and John Paul O’ Connor was centre forward and Anthony Cashman was a selector so ye are in good company lads.

The Celtic Challenge came to an end for Cork East against a very strong Galway side last weekend up in Galway. The tournament has proved to be a great success and our lads will reap the benefits of the exposure to such a high level of hurling, so well done to Aaron Kearns, Noah Devoy, Oscar Slye and Fionn O’ Connor who represented the club so well.

Well done to the Aghada GAA players involved in school competitions at the moment the Midleton CBS U16 footballers advanced to the semi-final and the U14 hurlers are in the Rice cup final against Thurles CBS at 4pm in Mitchelstown this Wednesday. The best of luck lads.

Congratulations to David Wallace who was the referee at half time in the Munster senior football championship in the primary games between Cork and Kerry, David comes from a family steeped in a rich sporting pedigree with his mother Leonie a former Irish rugby international and his father Willie a Cork minor hurler two years in a row, so he will not be short of advice when it comes to forging a career in sport.

Our brand new club coffee shop is on its way. Massive wo...