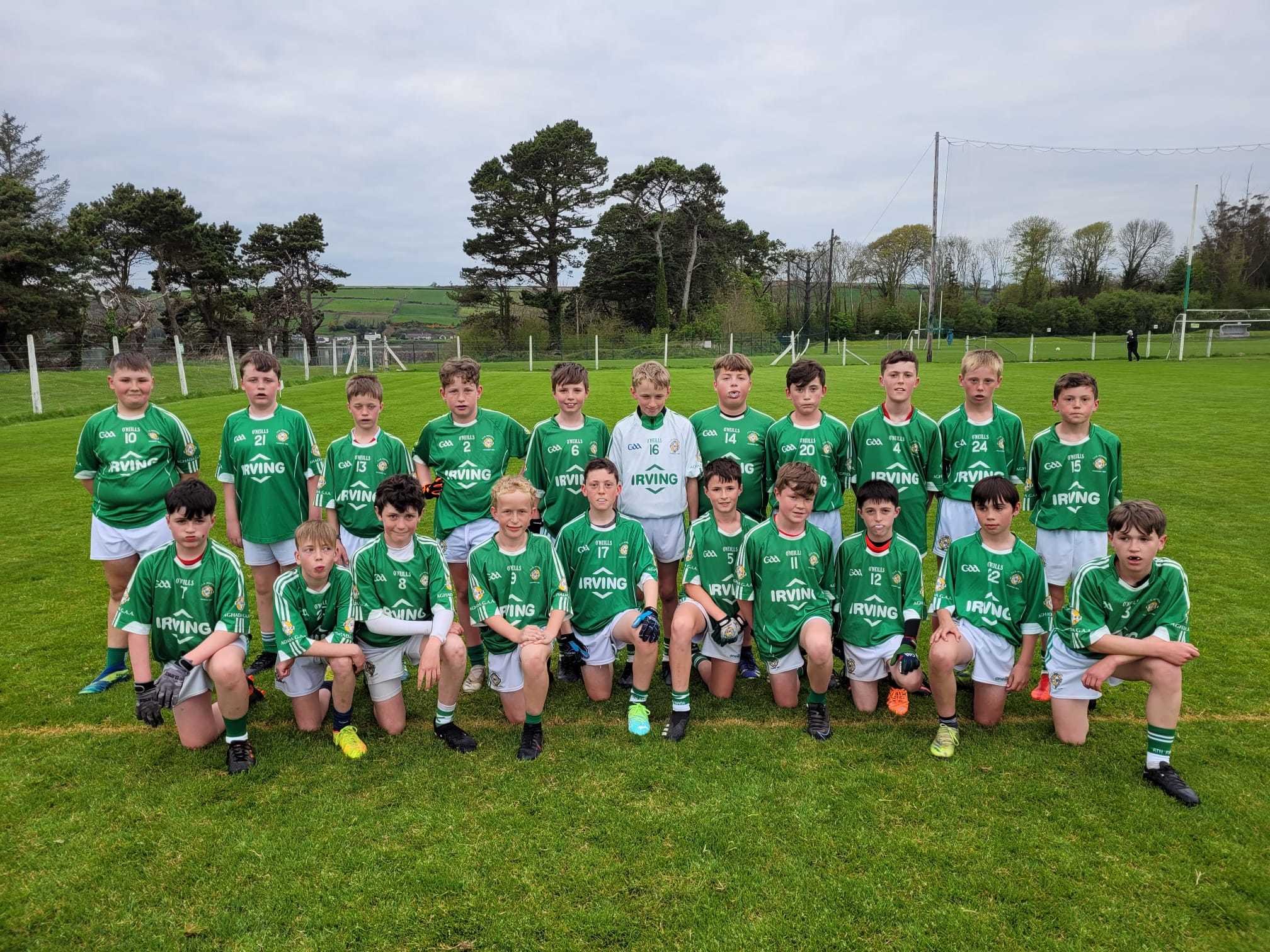 Hi folks hope you had a lovely and enjoyable bank holiday weekend. The highs and lows of sport were evident once again from Madison square garden to the square in Thurles. Majestic Katie proving she is still the best and one of our country’s greatest ever sports people and the not so majestic Cork hurlers well beaten by Clare. The Cork U20 hurlers also lost out to Tipperary in the championship and hard luck to our own Fergal Rasper Condon a selector with the team, his good run had to end sometime and no doubt he will be in demand for plenty more Bainsteoir bibs in the not to distant future.

We travelled to Killeagh to take on the home side in the U15 p2 hurling league last Wednesday evening and it was the home side who emerged victorious in a game where our lads never really caught fire. Killeagh started brightly and had our rear-guard under constant pressure scoring 1-2 and goalkeeper Adam Lewis had to be alert to keep out a piledriver, before we replied with a good free from our full forward Tom Walsh from a difficult angle. We then had further points from Tom and Isaac Oosthuizen in what was our first half total as the home side continued to impress to lead 2-8 to 0-3 at the shorth whistle. We came out battling in the second half with the numerous changes taking effect with Jackson Kearns, Eoghan Walsh, Austin Schoeman and Cillian Byrne all making an impact a series of points from Jude Devoy and green flags raised from Jude and Isaac put a bit of respectability on the scoreboard, but it was still the home side who took the honours 3-15 to 2-9. Our lads know they can perform better than this and will no doubt be looking to increase the tempo in the weeks ahead.

A great win for our U17 p2 hurlers away in Carrigtwohill last Friday night with a sublime Tomás Condon goal five minutes from time proving to be the decisive score between two evenly matched teams. From the first whistle these two sides went at it point for point and at the break it was 11 points apiece. Carrig took a 2 point lead mid-way through the second half but our lads kept digging deep and with some pin point puck outs from John Walsh, fantastic defending and great scores from Samuel O’ Driscoll and Fionn O’ Connor we were level entering the final five minutes when Tomás struck for that all important goal and with great teamwork and brave defending we managed to see the game out and make it 3 from 3 in the league in another very impressive showing from the boys in green. Team John Walsh, Evan Crowley, Fionn O’ Callaghan, Conor Geary, Aaron Kearns, Sean O’ Callaghan, Cian Hegarty, James Hurley, Oscar Slye, Samuel O’ Driscoll, Hugh Mulcahy, Noah Devoy, Tomás Condon, Fionn O’ Connor, Stephen O’ Shea. Subs used Robert Dean, James Motherway.

We were in Feíle football action last Saturday morning in Killeagh the group format pitted us against Youghal and the home side with the group toppers going through to the semi-final later in the afternoon against the group winners of Kiltha Óg, Cobh, Mayfield, and St Colman’s. First up for us was Youghal and we started good and fast an Eanna Crowley free got us off the mark and then 2 quickfire goals from Andrew Murphy and Cormac Walsh with composed finishes put us in a strong position. Our goalkeeper Jago Evans produced a stunning double save from a penalty as points from Andrew and Cormac had us leading at half-time 2-3 to 0-2 in the 15 minutes a half game. Youghal came at us strongly in the second period and scored 1-1 but our defence was resolute and our workrate all over the pitch high as points from Sam McAllister and Jack Buckley saw us home winning 2-5 to 1-3. The next game was a winner takes all encounter against Killeagh who also beat Youghal in their first game and two evenly matched sides went at it hammer and thongs. The home side opened brightly with some nice points as a Jack Buckley point got us going and then the hard-working Tom Walsh blasted home a well worked goal to leave it level at half time 1-1 to 0-4. Killeagh moved ahead with 3 more points, and we responded in style with a goal of real quality Isaac Oosthuizen started off the move from our own full back line exchanging passes with Sam McAllister and onto Cian Moore who gave it to Cormac Walsh who in turn played in the pacy Isaac and he found Jude who made no mistake with a quality finish. We were in the ascendancy now as Cormac knocked over what proved to be the winning point and we emerged victorious by the slenderest of margins 2-2 to 0-7. Many thanks to the Killeagh club for the wonderful refreshments and we were on the move to Castlemartyr to take on Cobh the surprise package and winners of the other group. We found out quickly why our fellow sea siders made it through as they are a quality side with a real penchant for scoring goals and try as we might to wrestle control of the game the clinical Cobh side punished us at every opportunity. Nathaniel O’ Driscoll scored our goal and Cian Moore struck some nice points, but it was Cobh who advanced 1-6 to 6-4. Congratulations to Cobh and we wished them well in the final and well done to our lads who certainly played their part in an exciting days football.

Our U13 second football team welcomed Sam Maguires from Dunmanway to Rostellan on Sunday morning and it was the Doheny’s side who were the happier on the long journey home. We enjoyed spells of dominance during the game with Colin White a driving force throughout and good play from the younger members of the team Michael Creedon and Dara Kelleher. Trystan Roberts got in for a well-executed goal and Cormac Cashman gave a solid display between the posts. Marcus O’ Loughlin was a towering figure in his new position at midfield, while up front Justin Ginju showed off his great handling skills to good effect, but it was the men from the west who emerged victorious in a cracking encounter.

Glenville were the visitors to Rostellan in the U12 football league on Monday night. They say goals win matches and that was certainly the case for our lads who were in heaven with seven. We led 2-2 to 1-4 at half time corner forward Sam Aherne with a brace of well taken goals and the points coming from Justin Ginju and Eoin Kirrane. The visitors stormed into an 8-point lead mid-way through the second half, and it could have been worse were it not for a spectacular save from custodian Cathal Lowney that drew a warm round of applause from the large Aghada support on the seaside bank of the main field. Then a moment of inspiration from the selectors bringing Cathal to midfield and David Murphy to corner forward turned the game in our favour. David shot an impressive 4 goal salvo and Cathal also found the net to totally stun our opponents and with Leon O’ Connor and Cormac Cashman excelling at the back and Max O’ Reilly doing well when introduced the comeback was complete 7-2 to 2-11 winners on a night when the character of the panel of players shone through to beat a strong Glenville side and where the 7 green flags proved decisive.