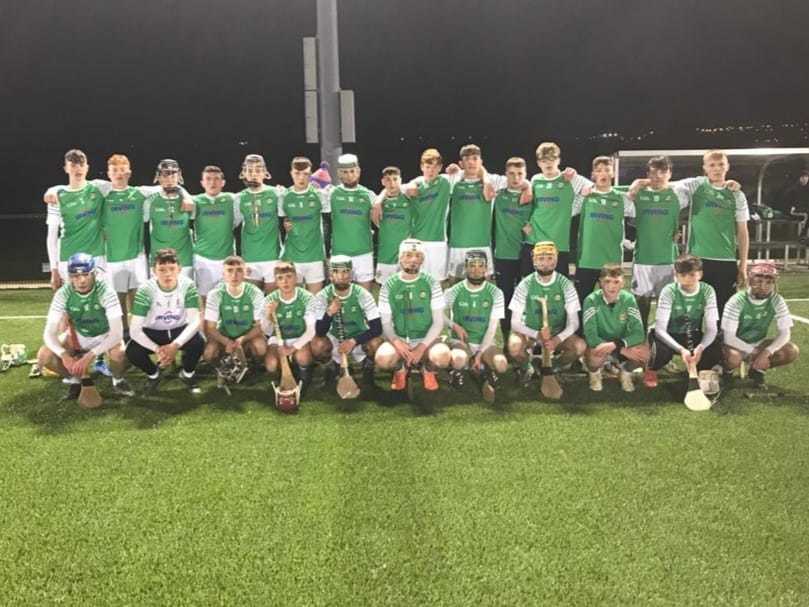 There was great excitement in Rostellan last Friday night as the man in the red and white suit came calling. Santa arrived by fire engine kindly provided by Irving oil and accompanied by fire chief Adrian O’ Donovan and fireman Seán Norris. The children then enjoyed a drive through experience with Santa taking up residence in a custom-built Grotto with help on hand from our underage mentors, a big thankyou here must go out to our Lead mentor John Connolly, Chairman PJ Hurley the Juvenile committee, Tommy Foley and all the mentors for the fantastic organisation and to Anthony Oosthuizen for the wonderful Christmas music bringing early festive cheer for the children before they headed home to enjoy that nights Late Late toy show.

Well done to Donagh Collins who was corner back for Midleton CBS who won their recent Dr Harty cup game and the best of luck to all for the remainder of the competition.

The Juvenile AGM was held recently, and the following were elected to run the juvenile affairs of the club for 2022.

U16 Premier 2 County Hurling Final Aghada 2-16 Erin’s Own 1-21 Deadlocked at full time Extra time was needed to separate the East Cork teams in a ding dong battle for supremacy and ultimately it was our boys who suffered heartbreak on the 4G pitch in Bishopstown last Saturday night. We were a point up into injury time at the end of normal time when Erin’s Own made one final push to conjure up the equaliser that would send the game to the added minutes. On a bitterly cold night the game did not take long to warm up as both sides blasted out a message of intent to produce a fine hurling contest brim-full of commitment and resolve. Our opponents opened the scoring with a point and that was quickly cancelled out by ace free taker Oscar Slye who would go on to have a fine game for the boys in green and then just like in the semi-final a long-range strike from Fionn O’ Connor went all the way to the net to raise the green flag. Erin’s Own hit back with 3 points in a row and then Oscar once again found the range to give us the lead 1-2 to 0-4 at the first water break. The tempo was high with both teams going at it hammer and thongs fine defensive displays from Conor Geary, Fionn O’ Callaghan, and Cian Hegarty, repelled the attacking threat from our opponents. Noah Devoy set up James Motherway who pointed sumptuously as did Stevie O’ Shea before another textbook score from centre back Fionn O’ Connor who nailed the quarterback role and showed great leadership to leave us 2 points in arrears at half time 1-5 to 0-10. We started the second half in impressive fashion with Tomás Condon firing an unstoppable shot to the net for a goal of high quality and along with points from O’ Connor and Samuel O’ Driscoll had us in the ascendency as Erin’s Own responded in style to take the lead once again 0-16 to 2-8 at the water break. The awesome work rate on both sides continued mixing silk with steel and trying to get the upperhand, with Robert Dean, Seán Santos O’ Sullivan, Hugh Mulcahy and Aaron Kearns to the fore, points from O’ Connor and Oscar had us level before a brilliant score from Substitute James Hurley looked like it could be the winner, but our opponents did not read the script and took the game to extra time. Bodies were tired now and we lost a few players through injury as the pace of the game began to take its toll on the 4G surface. Erin’s Own found the net early for a goal that would have a big significance on the final outcome, Oscar kept us in touch with 3 fine scores of top quality and we were one point down at half time in extra time. Both teams emptied the tank in the closing minutes, Tomás Condon with pace and skill fired over 2 quickfire points as Erin’s own kept their noses in front and held out for the victory in a game that encapsulated all that is good in underage hurling in Cork.Team & scorers: John Walsh, Aaron Kearns, Fionn O’ Callaghan, Conor Geary, Seán Santos O Sullivan, Fionn O’ Connor 1-3, Cian Hegarty, Oscar Slye 0-7f, Robert Dean, James Motherway 0-1, Hugh Mulcahy, Noah Devoy, Stevie O’ Shea 0-1, Samuel O’ Driscoll 0-1, Tomás Condon 1-2. subs used James Hurley 0-1, Evan Crowley, Callum Roberts, David Wallace.