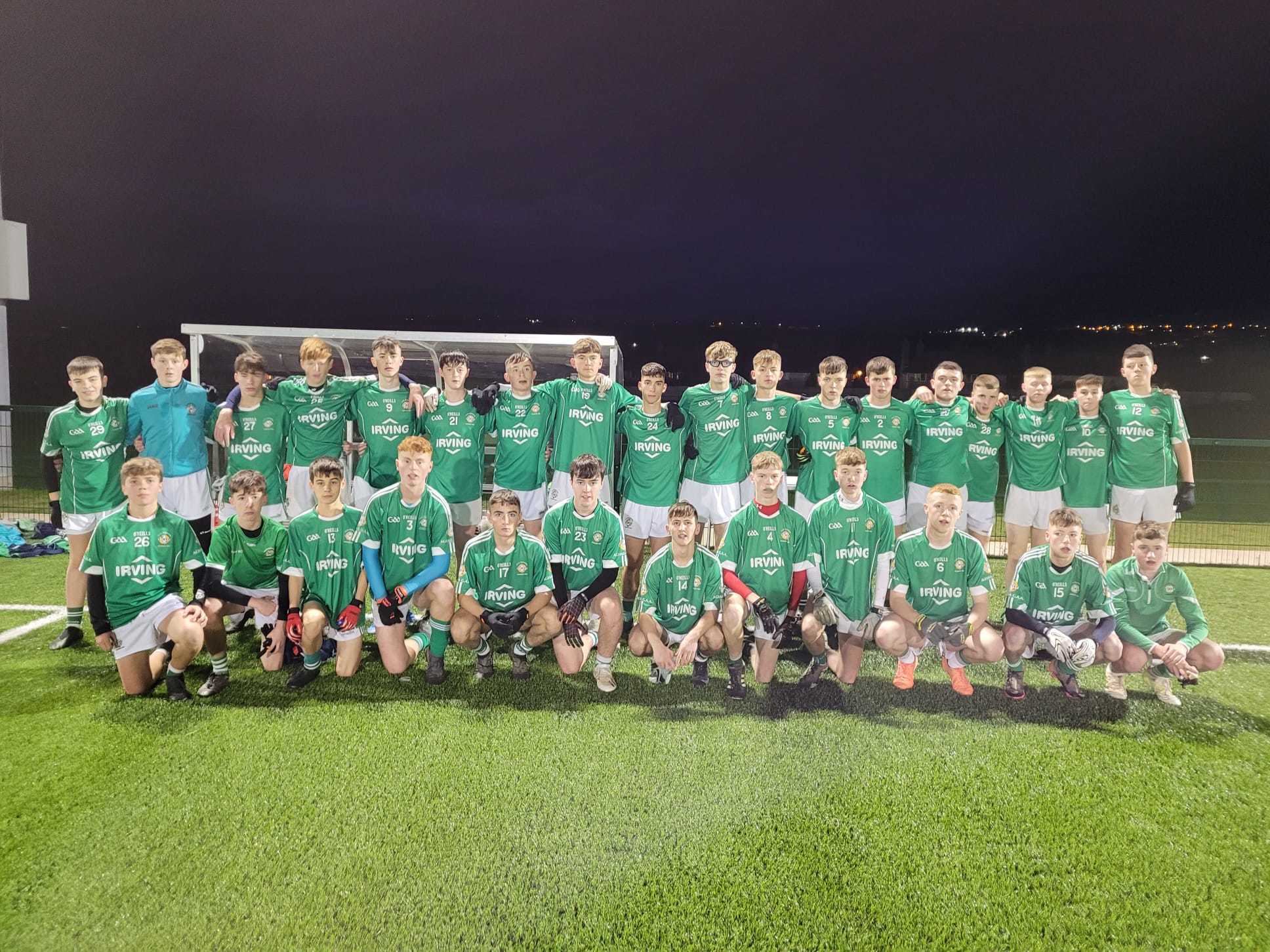 Hi folks, unfortunately we had to endure the bitter taste of defeat in our u16 county football final loss to Bishopstown, but knowing our lads they will dust themselves down and be ready for the hurling decider this weekend. These lads are made of stern stuff they started off the year doing zoom training sessions as Wednesday nights were strength and conditioning classes and Sunday mornings they focused on the skills with both management teams cooperating very well and when they got the green light to go back on the field they organised a fantastic event for charity by running a full marathon completing 26.2 miles by taking turns to run laps around our forest field, so it is no coincidence that they made the finals of both competitions at this time of the year and giving us all such enjoyment along the way. The u9 footballers extended their season and travelled to Youghal last Saturday morning for a competitive challenge with the hosts, with 20 players on the age making the trip it was a very worthwhile exercise for all involved. Our club members were involved in various county hurling successes over the weekend Richie Lewis and Trevor O’ Keeffe are the coaches to the Lisgoold team who won the Lower Intermediate County Final, Ronan Dwane is the coach to Ballygiblin who won the Junior A County and Vincent Morrissey is the coach to Belgooly who won the Junior B County while also Jennifer Hayes a member of the Mothers and Others team was an integral part of Midleton’s backroom team who won the senior title as performance psychologist, well done to all involved. Talking of county finals there was a very interesting article by Christy O’ Connor in his recent column for the echo where he highlighted that only seven teams in the history of the Cork county senior hurling championship have lost back to back finals and yes Aghada was one of them and while we must be mindful of history we must also keep an eye on the future as what we do today as a club can have a big impact in the years ahead and when driving home from Páirc uí Chaoimh on Sunday listening to the radio, Sam Quirke the young Midleton player spoke of how in 2013 the last time his club won the title he was watching the game as an enthusiastic 12 year old supporter and now he found himself lining out in midfield alongside many of those players he idolised helping to bring more glory back to his club, sometimes life can move on in what seems like the blink of an eye. For the record the seven teams who lost back-to-back county senior hurling finals are Aghada, Blackrock, Carrigtwohill, UCC, Ballincollig, Cloyne, and the Glen esteemed company indeed.

Our hopes of a u16 premier 2 double ended at the first hurdle where a slicker Bishopstown side playing on there own 4G pitch proved too hot to handle last Saturday evening. The home side made ideal use of the 4G surface that was definitely an added advantage as they played a fine brand of attacking football on what is without doubt a fantastic facility to have at their disposal. Both sides were slow out of the blocks as it took until the ninth minute for the first score of the game, a point for the home side and it must be said we probably had the best of the chances in that opening period and couldn’t take any, that was a pattern we struggled to break as the game wore on. Our first score came when an inch perfect kickout from Eric Cunningham was superbly fielded by Hugh Mulcahy and the ball eventually ended up with Stevie O’ Shea, who made no mistake to raise our first white flag of the game. Our only other point of the half was from a John Walsh free after a great crossfield pass from midfielder Cian Hego Hegarty found half back Fionn O’ Callaghan bearing down on goal and his run was illegally halted, at this stage the town had put 1-4 on the board despite the awesome performance from Hugh, who bestrode the scene like the veritable colossus in the forward line, so much so he had three different markers who tried to shackle him over the hour but the chances we were creating we failed to take and with John having an off day with the boot from the placed ball although he never left his head drop and kept giving his all to the cause, we slipped 1-6 to 0-2 in arrears at the short whistle. The home side surged forward in the second half and were more economical in their approach and more clinical in their finishing and with Eric producing a brilliant double save to deny a certain goal they still managed to find the net with their third attempt to put the game beyond us, although our lads kept plugging away Robert Dean saw a shot flash narrowly wide across the face of the goal and Fionn O’ Connor was bundled over for John to convert another free, Hego kicked a fine point from distance as Aaron Kearns bravely intercepted a pass and found Hugh who used all his skill and strength to burrow forward and fire an unstoppable shot to the net, then substitute James Motherway also kicked a superb point after good work from another substitute Joshua Halpin but alas it was too little too late as the town were full value for there convincing win. The brilliant achievement of reaching the final will not be forgotten and the team bonds that grew stronger from those first Zoom sessions will stand them in good stead as they don’t have much time to lick the wounds and we wish them all the best as they once again will take to the Bishopstown 4G pitch this time in the hurling county final against Erin’s Own. Aghada team & scorers :Eric Cunningham, Seán Santos O’ Sullivan, David Wallace, Conor Geary, Fionn O’ Callaghan, Fionn O’ Connor, Aaron Kearns, Noah Devoy, Cian Hegarty 0-1 ,John Walsh 0-2f, Oscar Slye, Robert Dean, James Hurley, Stevie O’ Shea 0-1, Hugh Mulcahy 1-0 .subs used James Motherway 0-1, Tomás Condon, Joshua Halpin, Ronan Walsh, Diarmuid Cotter