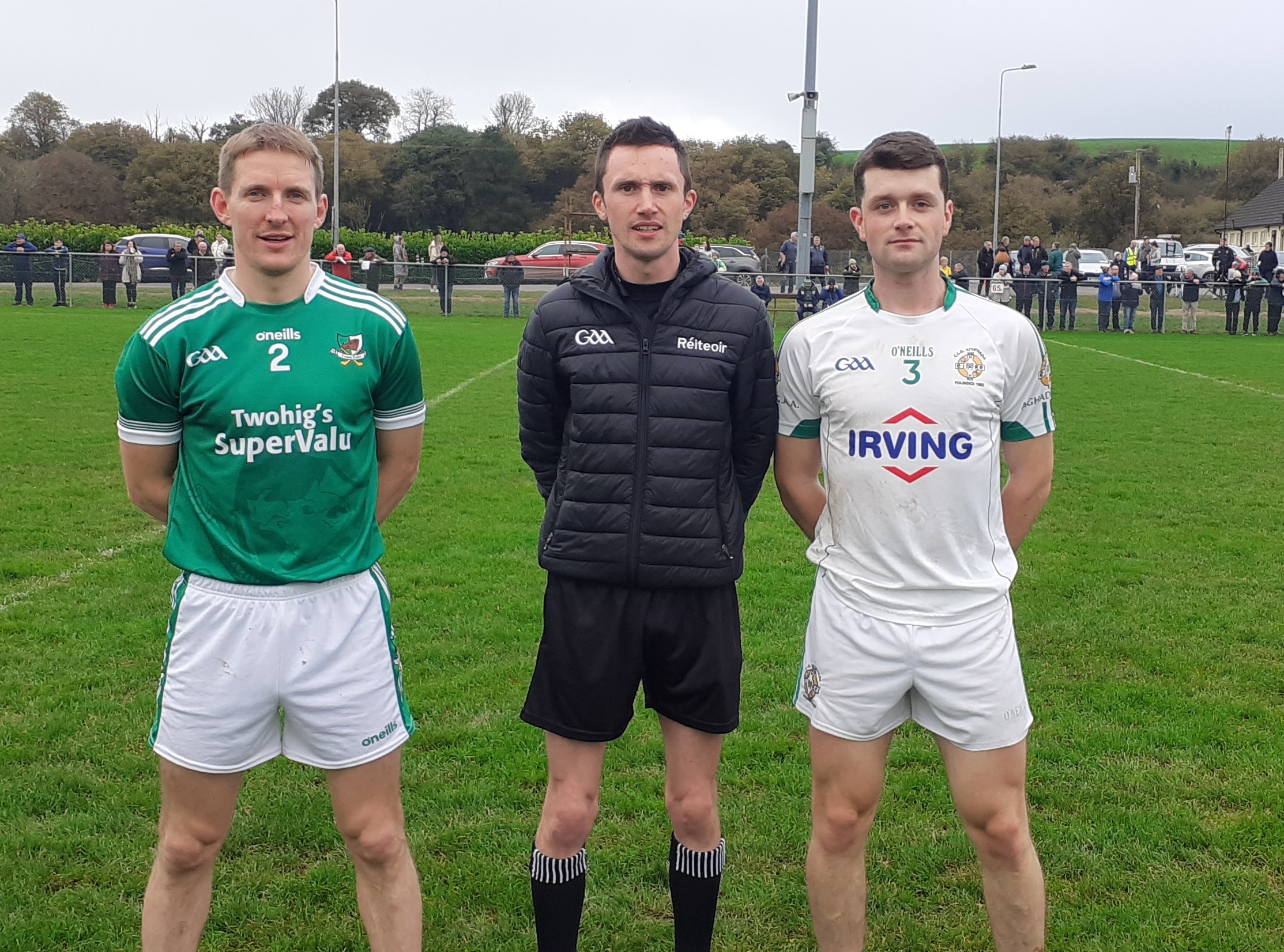 Ouch. This one hurt a lot. I can only imagine how tough it was on players and management who gave it their all only to be denied a shot at a county title when our opponents snatched victory in the dying moments to win by a point. It will take a while to recover, but when we look back on the year there will be plenty positives to focus on. This time last year we were well beaten by the same opponents at the quarter final stage. So to go out in the semi final by the narrowest of margins represents progress. That Kanturk now face Newmarket in the final, a team we drew with earlier in the championship, tells us we are not far off where we need to be to win this competition. So if we can drive on and find the improvements necessary, it’s a championship we can have serious say in again next year.

Still all that will be scant consolation for now. 7 points to 3 up at half time. And a man up to boot, after our opponents were reduced to 14 men in the 27th minute, Aghada were in a great position to kick on and reach this year’s final. We just needed to keep the scoreboard ticking over for the 2nd period. Credit to Kanturk, the previous week in their hurling semi final they were again a man down and this time 8 points down and they still managed to overcome Newcestown. Now they were determined to repeat the trick. They defended in numbers and made light of the numerical disadvantage. When Aghada did get a shot off we were off target or dropping short. In fact the opening period of the second half saw us miss 3 scores in this manner before the first score of the 2nd half came from Kanturk. Winning their own kickout they drove at the heart of the Aghada defence and a couple of passes later had the ball in the back of the net with their only goal chance of the game. We had our 4th miss of the half with a wide on 12 minutes and from the kickout Kanturk pointed from play to draw level. Aghada responded and how, with an exceptional goal from Aaron Berry. Winning possession on the right touchline and 45 metres from goal, wing forward Berry jinked past a couple of defenders and then rounded a third before soloing in on goals. A rocket of a shot to the roof of the net made the score 1-7 v 1-4 in Aghada’s favour with a quarter played. It should have been the lift Aghada needed but incredibly it would turn out to be our one and only score of the half. We lost Pearse O Neill to injury and Diarmuid Phelan was also carrying a knock and our failure to put Kanturk away, gave the North Cork outfit the encouragement to push on for the final 10 minutes. We were probably trying not to lose at this stage instead of trying to win and Kanturk had points from play on 26 and 30 minutes to go with an 18th minute pointed free. So the sides were all square as the clock ticked into injury time. On 33 minutes Kanturk palmed a cross field ball over the bar to take the lead. Winning possession from the kickout we got one chance to equalise but a floated effort from Tim Hartnett just barely drifted wide of the upright. Soon after the final whistle sounded and that left players management and supporters alike all devastated after coming so close.

The opening quarter had been an even affair. Hard work from our forwards earned a free which Danny Creedon opened the scoring from. Throughout this half this honest hard work from the Aghada forwards was a feature. None more so than Berry and Cian Fleming. Kanturk had the next 2 scores before Fleming had a fine score from play after good work from Michael Russell and O Neill. O Neill next set up Berry for Aghada’s third before a pointed Kanturk free brought us to the 1st water break. The 2nd quarter belonged to Aghada. Ciaran O Shea was excellent from kickouts all through, and another pinpoint restart on 18 minutes found Russell. He linked up with Diarmuid Byrne who released Kevin O Hanlon for point number 4. Next Fleming and Shane Bennett linked up before Kyle O Shea stormed up from corner back to kick a great point on 21 mintues. At the back Kyle, Jack Mc Donnell and Ronnie were coping admirably with any Kanturk attack. On 27 minutes came the red card for Kanturk and Creedon pointed the free that had been won by Russell. Pearse finished off the 1st half scoring after running from midfield and pointing. That gave us the 4 point interval lead and plenty reasons to be optimistic, but alas it just never happened for us in the second half.

On Sunday morning our 3rd squad had a better outcome in their semi final with a fine win over Carrigtwohill's second team to qualify for this year’s final. With manager Mattie O Connor away stateside, he got 2 men to stand in for him on the sideline for this game. One was a hugely successful and well known football manager, and with Derrick Whyte on the day was also Conor Counihan. Between them they picked a team with a red hot full forward line comprising of Fintan Cody, Charlie Terry and Sean Morrissey. This trio hit 1-13 between them and were involved in creating the ones they didn’t score. Fintan finished with a very impressive haul of 1-8, all from play. His goal came on 20 minutes. A neat jab pick up before spinning his man, saw him bear down on goals with still plenty to do. But after missing an earlier goal chance this time the young corner forward made no mistake burying an unstoppable shot to the back of the Carrig net. At this point Carrig had already raised their 1st green flag and soon after they raised their second, but a string of points from Cody all from play leading up to half time put clear daylight between the sides on a halftime score of Aghada 1-10 v Carrigtwohill 2-1.

Captain John Manning did make a fine save early in the second half, but with Ciaran Galligan and Sean O Callaghan well on top at midfield we had further points from Terry, Morrissey and Cody which meant the game was done and dusted by the last water break. Aghada continued in the ascendency for the final quarter and continued to hit some fine scores from play. With Ben Walsh highly influential on introduction, Vince Rohan, Oisin Counihan and substitute Rob Stafford all split the posts in this period. Carrig kept battling away and had the final score of the day, but when all was said and done Aghada were victorious on a 1-17 v 2-5 scoreline. The final will be a much tougher affair as we will renew rivalries with near neighbours Ballinacurra who already beat us earlier in the round robin stages of this championship. No date as of yet, so we could have Mattie back and the two stands in look likely to be sacked before Olé! 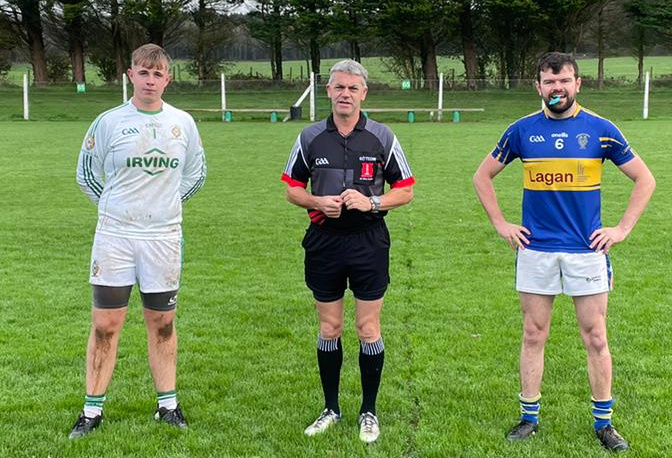