In the end it was a comprehensive win for our third team who, playing a nice brand of football, advance to the semi final of this year’s championship. Even though the scoreboard tells a different story, there wasn’t a lot between the sides in the opening half. The main difference was that while Youghal squandered a lot of easy scoring chances, at the other end Aghada were far more clinical. And in Charlie Terry and Sean Morrissey we had the two outstanding forwards on view. It really was the Charlie show early on. He opened the scoring with a point in the 1st minute and then a minute later a great ball in from Craig Healy was caught by Charlie who spun his man before firing home to the roof of the Youghal net. Aghada via Charlie were 1-3 to the good before Youghal got their 1st score which also was a goal. To be fair they could also have had 1-3 on the board by now but for the wayward shooting. Next it was Oisin Counihan’s turn to stamp his mark on the game when he set up Sean Morrissey for a point before hitting two of his own in as many minutes. Cha and Jordan Ryan with the assists. On 21 minutes Aghada were well and truly in the driving seat when Charlie struck for his 2nd green flag. A great foot pass from Alan Walsh to Sean Morrissey, was replicated by Morrissey finding Charlie and he again used his strength and bore in on goals finishing well. For the 10 minutes from here to the break, Youghal outscored Aghada three points to two to leave the score at the interval 2-8 v 1-3.

Manager Mattie O Connor and selector Vince Rohan made a couple of switches at half time although it is strongly rumoured that they didn’t quite see eye to eye on the personnel changes. On came Shay Keane and Sean Og O Keeffe and both players were hugely influential in the 2nd period. Charlie again opened the second half scoring with a point assisted by Vincey and Sean Og quickly followed this up with another white flag. 2 minutes later the game was decided. Captain John Manning made an excellent save from a Youghal penalty. Aghada broke up the field and flying wing back Craig Healy hit the goal of the night with an inch perfect finish after bursting in from the right hand side. 3-10 v 1-3 and only 3 minutes into the second half and the semi final was beckoning. Now Sean Morrissey took over the spot light from Charlie and the young corner forward hit 6 points off left and right legs from here to the end. With Vincey Rohan impressing, linking the play intelligently between defense and attack, Aghada played some accurate long balls into the full forward line for Morrissey to thrive on. Youghal battled away manfully but found the Aghada defence with Sean Byrne, Jack Corkery and later Callum Fletcher particularly solid. The game also saw the return of Ed Leahy and it was great to see Ed being Ed excelling at centre back. Aghada had a 4th goal, this time from Sean Og, who calmly rounded both his defender and goalie before slotting home. So on we go to a semi final where we face Carrigtwohill’s second squad in what is sure to be a more difficult challenge. This game is fixed for Rostellan at 12pm on this Sunday morning – 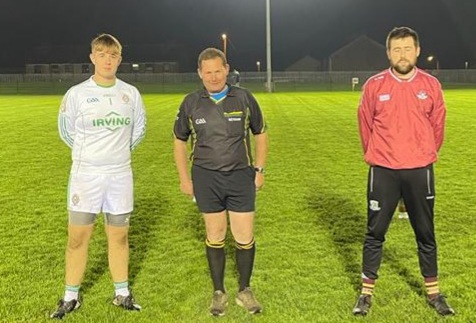