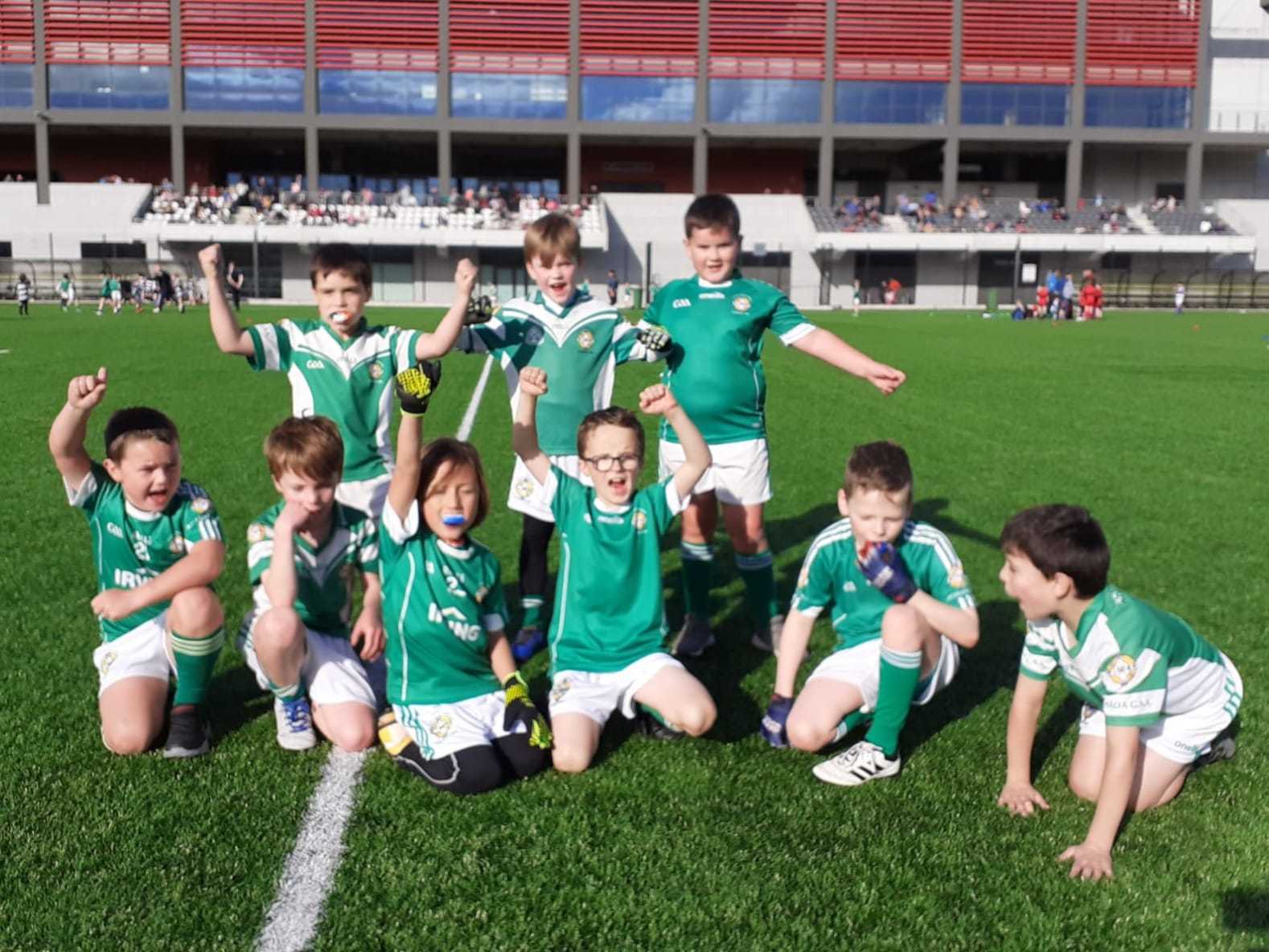 Hi folks, stepping into Halloween 2021 the nights may be closing in, the weather becoming less than kind and the clocks going back, and this still does not deter our young players from displaying their supernatural powers in the sporting arena as the games continue to dominate in our winter sky. Bank holiday Monday last our u13 hurlers enjoyed the best of the weather as they came out on top in a hurling tournament brilliantly organised and hosted by the club. We beat Ballycastle Gaels in the final 4-7 to 2-2 after drawing 1-5 apiece in the group stage with the same opposition. Blarney defeated Courcey Rovers in the plate final with all the games played in glorious sunshine, a good day was had by all especially when you consider a couple of days later it looked like we could be building another ark such was the deluge that transpired. The management team deserve huge credit not only for the organisation of this excellent end of season competition but also the way they used a different captain in every game, acknowledging those who had the best attendance at training during the year with a 98% turnout average. Those who captained the team in the group games were Tom Walsh, Cormac Crowley and Austin Schoeman with Jackson Kearns getting the honour in the final and Jackson delivered a fantastic speech fitting to the occasion on accepting the cup from our director of hurling Alan Devoy. Also, a huge thanks to all the parents who helped with the catering that was very much appreciated by everyone present on this enjoyable day.

The wins keep coming and we had two fantastic results in u16 premier 2 hurling and football championship, both games were played over the weekend with just a day in between, so great credit to this group of players who will now contest premier 2 semi-finals, starting with football next Sunday against Fermoy and a big thank you to Vince Rohan for this week’s u16 football report. Our first adult football team will also be in semi-final action after an absence of 15 years, they had a great win against Nemo Rangers and are playing a fine brand of attractive football, there is a nice buzz around the team, and we wish them well for the challenges ahead. The best of luck to our junior B hurlers who contest the East Cork final next Friday night.

End of season games are being played out in our academy with the u7 hurlers playing recently away to Sars and Carrigtwohill the u9 footballers took on Youghal in Rostellan the u10 footballers were in Caherlag against Erin’s Own the u11 footballers took on Ballinora in Rostellan, with our u8 footballers enjoying a great day out at a blitz on the 4G pitch in Pairc Uí Chaoimh, many thanks to all our underage coaches who give up their spare time to help in the development of our young players.

U16 P2 Football Championship V Glenville 1-8 to 0-9 report by Vince Rohan Our U16 footballers made the journey to Glenville last Friday night to play the Quarter final of the premier 2 county championship. With the weather bad all week it looked like the weather gods had given us a break with no rain falling from the skies as the team was named. However, as soon as the lads had their jerseys on, what can only be described as monsoon like conditions started to develop. To our lads credit they were unphased and went about the warm up with great intensity. The weather calmed before the game began and our lads raced into a lead that they would keep for the entirety of the game. Eric Cunningham was leading the troops from the back with his kickouts pin point. Fionn O’Callaghan, Conor Geary and Santos O’Sullivan were on top form attacking the ball at every opportunity in our full back line, making sure that Glenville didn’t get a sniff of a goal all night. Robert Dean was highly influential throughout the game. He carried the ball on numerous occasions up the field and utilised this possession to the maximum. Josh Halpin was making a lot of unselfish runs to make space for incoming runners which eventually led to our goal. It was Cian Hegarty who got the crucial goal in the closing stages of the first half to leave Aghada five points up at the break. This score-line didn’t tell the whole story though as Glenville now turned to play down the hill in Fouhy Park. Glenville started to slowly but surely claw their way back into the game in the second period but to Aghada’s credit, we kept adding a point in between their scores to keep our lead over the opposition. Captain on the night Oscar Slye was making a lot of runs back into defence at this stage to help his teammates and this paid dividends when Oscar intercepted a ball where Glenville looked certain to narrow the gap to one point. Instead from the turnover, Aghada went up the pitch where Stevie O’Shea was fouled and the ever reliant free taker John Walsh was on hand to widen the gap. James Motherway and Aaron Kearns were working incredibly hard now at this stage at making sure Glenville didn’t get any easy scores. The introduction of James Hurley, Hugh Mulcahy, Ronan Walsh and Diarmuid Murphy helped add fresh legs to the Aghada cause. Noah Devoy was excellent in midfield throughout the game where he drove forward on numerous occasions, which caused the Glenville defence untold problems. Fionn O’Connor and the young David Wallace marshalled the half back line with Aaron Kearns manfully with Glenville being met with a wall anytime they came at them. Aghada held on to claim a well-earned 2 point victory and now march into the county semi-final vs Fermoy next Sunday. Best of the night for Aghada were Robert Dean, Cian Hegarty and man of the match Noah Devoy.

Kudos here to both teams who made light of the atrocious conditions and went about the game in a sporting manner despite the driving wind and rain at Ballyanly last Sunday morning. This was helped in no small way by the excellent refereeing of Mark Maher of the St Finbarr’s club who applied common sense and had the respect of all the players. The hosts were first to trouble the scoreboard with a couple of early points and we responded in style a high ball into the goalmouth was batted down and caught by Stevie O’ Shea who made no mistake rifling the ball to the net, we started to settle now, enjoying longer and more productive spells of supremacy with Hugh Mulcahy particularly impressive in his new role of centre forward and outside him Noah Devoy and Samuel O’ Driscoll putting in barnstorming displays. This subsequently led to our second goal corner forward James Motherway finishing well with an exquisite flick beyond the home goalkeeper. Midfielder Oscar Slye was unerring from the placed ball as our ace netminder John Walsh brought off a superb reaction save just before the half time whistle to keep us in front 2-6 to 0-9. The tempo of the game intensified as both sides were looking to get a stranglehold on proceedings as Samuel emerged from a few hard rucks to fire over a couple of inspirational scores, this team does not lack leaders or resilience as in truth we were comfortable and never looked like losing the game despite a late goal from our opponents to leave just 3 points in it at the final whistle. We now head to a semi-final against fellow East Cork team Bride Rovers that is likely to be played the weekend after next. Team John Walsh, Fionn O’ Callaghan, Seán Santos O’ Sullivan, Conor Geary, Robert Dean, Fionn O’ Connor, Cian Hegarty, Oscar Slye, Aaron Kearns, Noah Devoy, Hugh Mulcahy, Samuel O’ Driscoll, James Motherway, Stephen O’ Shea, Tomás Condon, subs used Evan Crowley, James Hurley, Callum Roberts.