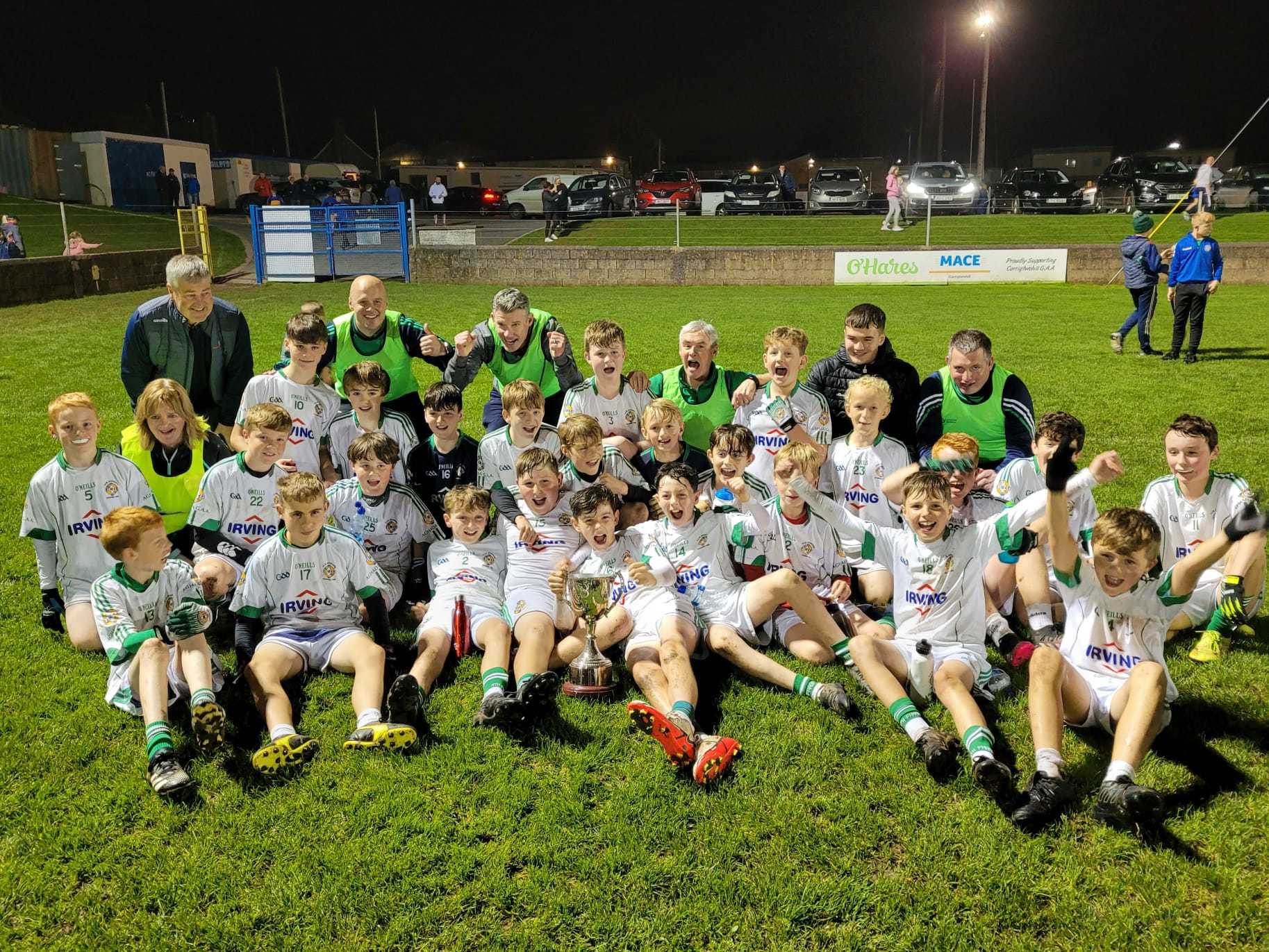 Hi folks, the jazz is in full swing and the nightclub dancefloors buzzing, not that this old scribe can remember the last time he was in a nightclub, although I did bear witness to the u12 and u15 footballers making there own kind of sweet sounds with fantastic shield final wins and our u17 hurlers playing on a different type of dancefloor, that was more akin to the ice rink at Cork on ice than a playing pitch, still the year is rocking to Good vibrations. We have a very interesting u13 hurling tournament on in the club on bank holiday Monday with a team from Waterford Ballycastle Gaels as well as Blarney and Courcey Rovers taking on our lads, the action starts at 11am and your support would be greatly appreciated. Well done to the u16 camogie team who won the county final recently in Castle road and the clubs junior B hurlers who overcame the strong challenge of Bride Rovers to make the East Cork final and the best of luck in the decider lads.

A special novelty night of goblins and witches took place in Rostellan during the week as our u7/u8 boys took on the camogie u10 girls in an entertaining encounter. Our thanks to Vera Terry and all the camogie coaches and Martin Ryan and all the hurling coaches for the organisation of this spooktacular event.

The players and supporters stood still as a minute’s silence was observed before the match got underway last Monday night in Carrigtwohill in memory of our late great clubman Dinny O’ Brien. Straight from the throw in we went on the offensive, midfielder Hugh O’ Loingsigh feeding Shay Rooney and he made no mistake landing the first point of the game. Further points followed from full forward Eoghan O’ Shea from a free after a strong Matthew Condon run was unjustly halted and Shay with a long range free, before Carrig struck with a goal to equalise proceedings. Carrig with a bit of forward momentum hit a few points and we responded, corner forward Conor Fleming got in behind the defence only to be taken down and up stepped Hugh to coolly slot the resultant penalty kick to the net. The match was being played at a blistering pace as Shay broke forward only to see his shot blocked and the ball broke to Eoghan who let fly to billow the net with a powerful strike to put us 2-3 to 1-3 ahead at the water break. The second quarter proved to be a fruitful one for our lads as the six backs put up the shutters holding the Carrig forwards to 1 point, while the attacking play was fast, accurate and deliberate hitting the full forward line at every opportunity. Matthew powered forward to strike a beauty with his right boot for a glorious goal and with Shay showing unerring accuracy from the placed ball we were in the ascendancy, this got even better when Robbie Oosthuizen rose highest to fetch a great ball from the sky from a Shay delivery and crash an unstoppable shot to the net. Centre forward Evan Courtney opened his account with a fine point, and we were 4-6 to 1-4 ahead at the short whistle and looking in a good position. Great credit to Carrigtwohill who kept asking questions as ace goalkeeper Cathal Lowney got down low to prevent a goal chance at the start of the second half, their perseverance paid off when they did raise a few green flags as our lads showed great composure when a fine team move ended with Aidan Johnston finding Eoghan O’ Shea and he made no mistake with a clever finish for a well worked goal. Shay pointed from a free to put us 5-7 to 3-5 ahead at the final water break. The last quarter served up some more thrills and frenetic action, Sam Morgan won a few colossal kickouts, scored a nice point and set up Evan to blast home goal number six. Cathal made another good reflex save and at this stage we had used our full panel of players, James O’ Neill saw a fine effort just drop short and Conor Daly also went close a couple of times as points from Evan and speedster David Murphy brought our final total to 6-12 a mighty display of clinical shooting from the team who led from the first minute to the last to complete a deserved victory. Captain Kaylan Cunningham delivered a fitting speech for the occasion as he accepted the cup from treasurer of Rebel Óg East and our own clubman Michael Mulry much to the delight of the players, mentors, parents and supporters. Team & scorers Cathal Lowney, Conor Padden, Ciaran Cashman, Rossa White, Conor Charles, Kaylan Cunningham Captain, Matthew Condon 1-0, Hugh O’ Liongsigh 1-0, Jake Morrissey, Shay Rooney 0-5, Evan Courtney 1-3, Peter Mulcahy, Conor Fleming, Eoghan O’ Shea 2-1, Robbie Oosthuizen 1-1 subs used Sam Morgan 0-1 Aidan Johnston, James O’ Neill, Conor Daly, Fionn Buckley, Seán O’ Reilly, David Murphy 0-1, Donncha Walsh, Harry Burgoyne, Cormac Cashman.

Firing on all cylinders the more clinical Aghada side were full value for the win in the shield final played under lights in Rostellan last Thursday evening. This game took a while to catch fire it was 5 minutes in before the first score was landed and a great score it was, centre back Hugh Mulcahy drove a great pass forward into the path of Eoin Daly he in turn found full forward James Hurley who floated over the first white flag of the day. Kiltha were guilty of some glaring misses in the first quarter especially from the placed ball, although the pressure from the home sides backs was also telling in keeping them at bay, with Colm White, Seán Santos O’ Sullivan, and Evan Crowley particularly prominent. Our boys were much more economical in possession and when corner forward James O’ Donnell deftly picked out the onrushing centre forward Samuel O’ Driscoll with a fine pass, Samuel superbly finished to the net for a quality goal. Hugh sprayed another fine pass into James O’ D who laid it off to Ronan Devoy to kick over the bar and just on the stroke of the whistle for the first water break midfielder David Wallace raiding down on goal saw his shot saved by the feet of the Kiltha goalkeeper to leave the score 1-2 to 0-1 in our favour. We started well in the second quarter James H pointing a free after Ronan was fouled and then dynamic wing back Tomás Condon broke a great ball to James O’ D who set up Ronan to crash home an unstoppable shot for a well worked goal. Kiltha struck over a few points and were also denied a certain goal when goalkeeper Jack Buckley produced a stunning save to keep the ball out of the net. Conor Bakx released the hard running Callum Roberts to play in Samuel to shoot over, Eoin Daly set up the impressive James H for another point and David then played in Eoin for the final score of the half for a 2-6 to 0-3 interval lead. We started the second half in commanding fashion with captain Robert Dean striking a superb goal, our visitors tried to keep in contention with a couple of points, as our hard work all over the field was paying dividends with James H pointing 3 in a row, the last coolly slotting over after Roberts shot rebounded back out to him after being blocked on the line, 3-9 to 0-5 in front at the last water break. Kiltha refused to throw in the towel and really made a fist of it in the final quarter scoring 1-6 with a strong scoring burst our only reply in this period was a well-executed James Hurley goal, but in truth we had done enough to secure the win and it was captain Robert Dean who spoke eloquently before raising the cup to the joy of the Aghada faithful. Team & scorers Jack Buckley, Colm White, Seán Santos O’ Sullivan, Evan Crowley, Tomás Condon, Hugh Mulcahy, Conor Bakx, David Wallace, Robert Dean 1-0, Ronan Devoy 1-1, Samuel O’ Driscoll 1-1, Callum Roberts, James O’ Donnell, James Hurley 1-6, Eoin Daly 0-1 subs Rodger McGrath, Jack Corkery, Finn Berry, Colm O’ Donoghue, Cian Murphy, Jude Devoy, Isaac Oosthuizen, Jack Linehan.

Sometimes you just have to put your hand up and say you were beaten by a better team and on this Sunday afternoon in Watergrasshill this was one of these days. Tricky underfoot conditions did not help proceedings after the heavy rain from the night before and a huge deluge before the end of the first half as it was the Kilworth/Araglen amalgamation who adapted better to record a rather facile victory in the end. Our opponents raced into a 7-point lead by the first water break although this did not tell the full story as our inability to convert the chances that presented themselves cost us dearly and it wasn’t until the move of Noah Devoy into the full forward line that we began to trouble the scoreboard. Centre back Fionn O’ Connor won a great ball and offloaded to midfielder Aaron Kearns, who put in a great shift throughout, he passed to Noah, and we recorded our first point of the day. We quickly followed that with another Noah point and when the same player was fouled, up stepped John Walsh to coolly convert point number 3 from the resultant free. Unfortunately, our momentum was halted as Kilara Óg pounced for a well worked goal and we were behind at half time 1-10 to 0-3. We started the second half with intent as Fionn O’ Connell emerged from a ruck to strike over the first point of the half and again Kilara responded a high ball in was not dealt with by the defence and a ferocious ground shot ended up in the back of our net, indeed were it not for some very important saves from custodian James Hurley we would have been in bigger trouble. The Aghada side-line made a move that paid immediate dividends, David Wallace entered the fray in the full back line, and this allowed number 6 Fionn O’ Connor to move to full forward, Fionn O’ Connell ran at the defence and passed to the new full forward who blasted the ball to the net for a great goal. Oscar Slye found Noah with a great pass for a superb point as John Walsh landed some more frees after fouls on Noah and Fionn O’ Connor and John saw a powerful strike deflected wide by the Kilara goalkeeper, however he stepped up to fire over the resultant 65. There was no doubting the winners the victory or their pedigree as a fine hurling side, but great credit to our lads who kept giving everything to never give up the fight in a tough day at the office and we must remember the fantastic victories that brought us to the final in the first place. Team & scorers James Hurley, Cian Hegarty, Fionn O’ Callaghan, Conor Geary, Seán Santos O’ Sullivan, Fionn O’ Connor 1-0, Aaron Atkinson, Aaron Kearns, Pete White Captain, Noah Devoy 0-3, Ronan Murphy, Oscar Slye, Fionn O’ Connell 0-1, Stephen O’ Shea, John Walsh 0-5 4f 0-1 65. subs used David Wallace, Diarmuid Cotter.