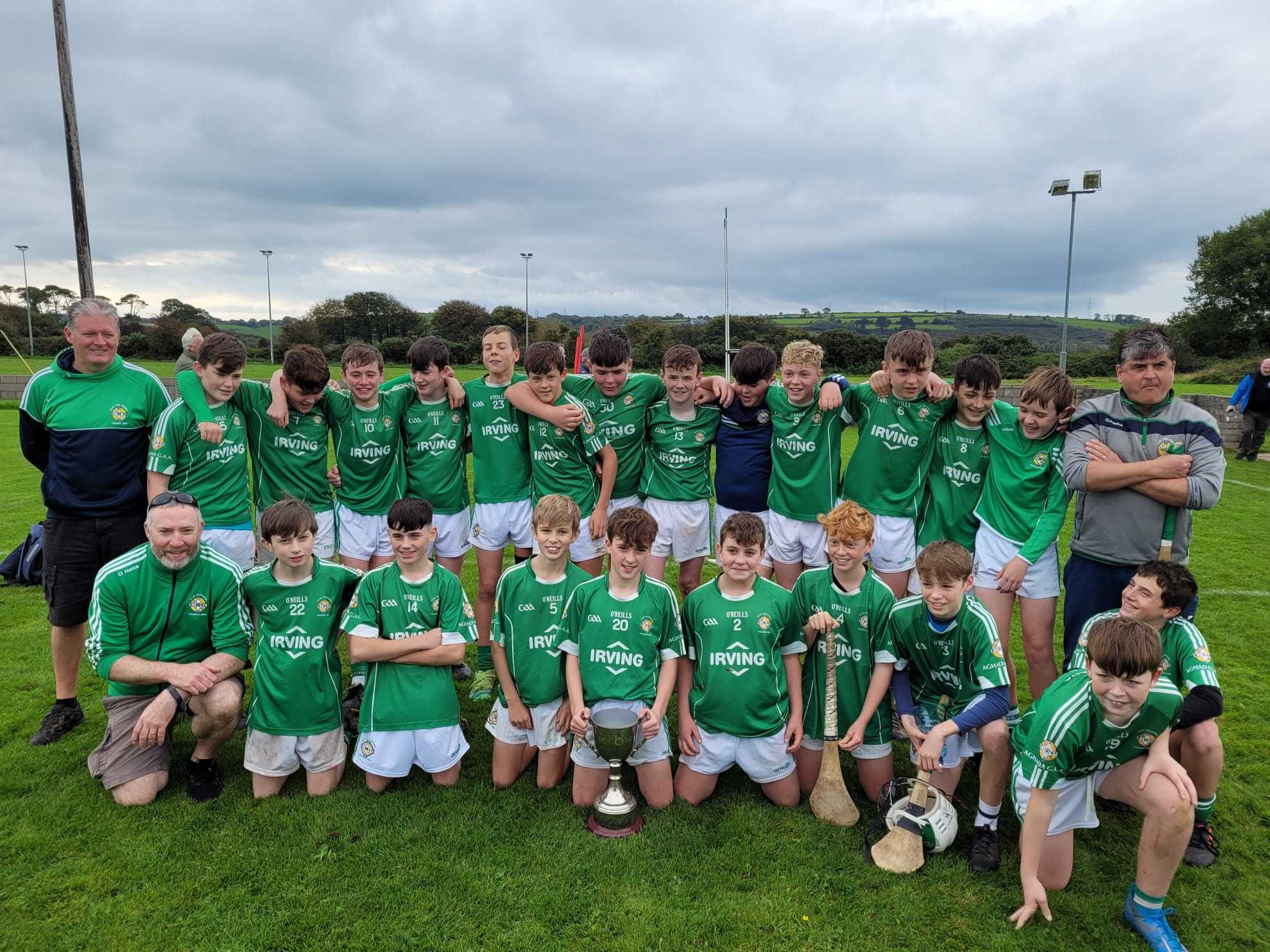 Hi folks, in an era with so many distractions it is hard to beat the feeling of going to a match when your club is playing and especially when it becomes a winning one, the joy on the faces of our U13 hurlers after winning the division 1 final was a joy to behold and proves once again that playing sport and being part of a team beats most things including the playstation! Our U17 footballers did not enter the winning enclosure this time but can be equally proud of a fine year and hopefully further glory will not be too far away as they contest the U17 hurling final this weekend and a big thank you to Vince Rohan who compiled this week’s U17 match report. The Billy Ahern U12 football tournament was a tremendous success once again, well done to all involved. Billy’s daughter Leanne and family and his brother Anthony were on hand for the presentations, as Glanmire beat Mitchelstown in the plate final and St Colmans defeated Aghada in the cup final. Our boys gave a great account of themselves losing narrowly and the one consolation was that the winning St Colman’s Bannisteor Kevin Walsh whose son Daniel was also playing, is a former player of our club and a former work colleague of Billy’s, adding to the emotion of the day. The parish leagues concluded with the hurling finals last Friday night as our young U10 players showcased all their skills in front of a large crowd. Many thanks to Mike Lehane of Energy Fitness for sponsoring this year’s competitions the highlight of last Friday night was a brilliant goal by young James Connolly doubling on the ball to send it crashing to the net, someone commented afterwards it was the best shot fired since 1916!

Producing their best performance of the season our U13 hurlers were in scintillating form as they overcame a battling St Catherines side in the final in Ballinacurra on Saturday morning. These sides know each other well and this led to a tense opening with both sides taking time to settle and once captain Richard Kelly fired over the first point of the game after a booming John Dorney puckout against the wind caused bother in the saints defence, the game started to open up. Both teams exchanged points with Tom Walsh showing nerves of steel as he produced a masterclass from the placed ball hitting 2 before Max Daly pounced to send the sliothar hurtling to the net after being set up by Sam McAllister, we were also thankful to a fine John Dorney save to be in front at the water break 1-3 to 0-3. Unfortunately at this stage we had lost the impressive Cian Moore to injury and he was replaced by the effective Cillian Byrne in the full back line, it was noticeable that the saints forwards were rotating positions as our guys stuck to them like glue and in particular Cillian Scanlon who gave an exhibition of teak tough defending ably assisted by Sam Douglas and Cormac Crowley in the full back line and half backs Jackson Kearns and Josh McCarthy , we went about our task diligently. The saints to their credit hit back with a fine goal and then went ahead from a free as we replied with a goal of real beauty a high ball in was expertly flicked to the net by ace poacher Adam Lewis as our confidence levels soared. The force of nature that is the uncompromising Jack Dorney lead the line intelligently as another free from Tom was added to by a brilliant individual Sam McAllister effort and we headed to half time 2-6 to 1-4 ahead after an entertaining opening sequence. The saints came roaring from the blocks with a big start to the second half scoring a goal in the first minute as our guys refused to panic and responded in style the hooking and blocking was a joy to watch all over the field with Alan O’ Reilly and Ollie Killeen to the fore, we made inroads once again, on the scoreboard Tom struck over a 65 and a few more monster frees, Richard was also on target and we moved into an impressive 2-12 to 2-4 lead at the final water break. The dominant team performance was added to by the huge contributions of Alex Buckley, Cillian Burke and Eoghan Walsh when introduced as Tom kept the scoreboard ticking over with more quality scores, a late goal from a free for the saints would not deny our lads the victory they deserved. The final whistle brought great scenes of jubilation as the mentors Joe Kelly, Eric Walsh and Pat Scanlon along with the happy supporters and parents stood proud as captain Richard Kelly hoisted the cup aloft before the convey headed south and back to the parish where a warm welcome awaited. Team & scorers John Dorney, Cormac Crowley, Cillian Scanlon, Sam Douglas, Cian Moore, Jackson Kearns, Josh MaCarthy, Sam McAllister 0-1, Tom Walsh 0-13, Adam Lewis 1-0, Max Daly 1-0, Alan O’ Reilly, Richard Kelly 0-2, Jack Dorney, Ollie Killeen, Subs used Cillian Byrne, Alex Buckley, Cillian Burke, Eoghan Walsh.

Our U17 footballers headed to Ballinacurra on Sunday to play Killeagh in the Rebel Óg U17 East Football final. Our lads were very much the underdogs going into this game with Killeagh after demolishing everyone they had played prior to this game. Unfortunately for Aghada this favourites tag was justified when the final whistle sounded with Killeagh the better team and running out winners by 1-11 to 0-06. This score didn’t tell the full story though as our lads put up a great fight throughput the game. In fact if it wasn’t for some sloppy hand passes and a few bad strokes of luck, the gap at half time would have been a lot less. Aghada’s backs were excellent throughout with Pete White, Olivier Joran and Conor Geary immense in the full back line. A special mention must go to Eric Cunningham who stepped into goals today for the injured Cian O’Shea. Eric made some top class saves and was top class with his ball distribution throughout the game. In the second half, Killeagh got a storming start but Aghada can count themselves unfortunate to have had a goal ruled out for an apparent square ball which would have reduced the deficit to 2 points with 23 minutes to go. Killeagh pushed on after this and got a goal of their own which effectively killed off the contest with Aghada then losing Cian Hegarty who had a storming game at wing back to a black card. To our lads credit though they kept battling until the final whistle and never through the towel in. Best on the day for Aghada were Eric Cunningham, Pete White, Olivier Jordan and Cian Hegarty. Killeagh were worthy winners on the day and we congratulate them on their win. Our lads can hold their head up high and be extremely proud of their performance against a quality opposition. The lads had a great year with every single player on the panel improving as the year went on with the attitude from every player excellent. The lads year is far from finished though with the U17 Hurling final next weekend to look forward to vs Killara Óg. After that there is U16 and U18 championships to be played in the next number off weeks so the winter will be very short for this bunch of fellas!!! Panel Vs Killeagh: Eric Cunningham, Conor Geary, Pete White, Olivier Jordan, Aaron Atkinson, Aaron Kearns, Cian Hegarty, Noah Devoy, Fionn O’Connor, Oscar Slye, Ronan Murphy, John Walsh, Tommi Oosthuizen, Fionn O’Connell, Fionn O’Callaghan, Stephen O’Shea, Isaac Mirner, Michael Corkery, Sean Busteed, Joshua Halpin, Ronan Walsh, Cian O’Shea, Diarmuid Cotter, Jack Dunne, Dan Gahan.