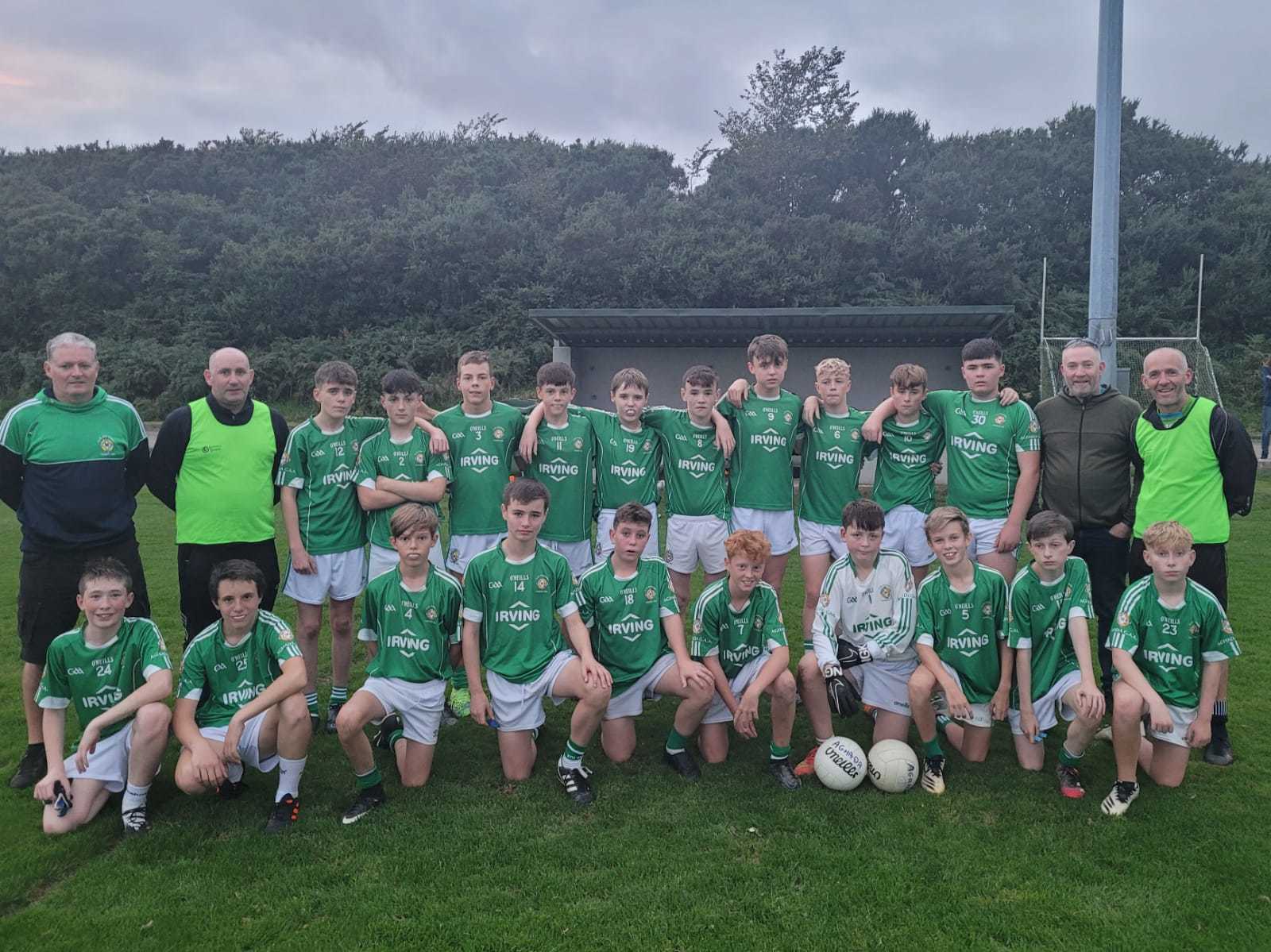 Hi folks I hope you enjoyed the glorious weather we had last week as the fields in Rostellan were a hive of activity once again, we had the 40th running of the Willie Ryan at the weekend a wonderful event that was very well organised and a huge thanks to everyone who made it such a special occasion. A big thankyou to all who helped with catering, parking, and all the match day activities the referees and to the lone piper our own clubman Alan Roberts who created a brilliant atmosphere leading the teams out for the final, to our club president John T Motherway who gave a great rendition of the national anthem, to the family members of the late Willie Ryan who were on hand to present the trophies and to the players who gave us a feast of hurling and all received a complimentary hot chocolate afterwards for their endeavours. For the record St Catherine’s won the final against Aghada and Killeagh won the plate against Cobh well done to all involved. Many thanks to Vince Rohan for the U17 match report on this weeks publication.

U13f semi-final Aghada 5-13 Youghal 8-6 after extra time Immense disappointment for our U13 footballers who lost out by 2 points in extra time after a titanic battle with our seaside neighbours Youghal in an electrifying semi-final clash in Rostellan last Friday night. Played under lights on a balmy night that was more like the middle of July than the end of September it was a perfect night for football with two evenly matched teams giving their all as the pendulum swung from one team to the other. We were level at half time and again at the end of normal time, with the result in doubt all the way to the finish, as you could hardly take your eyes off this one and unfortunately for us it was Youghal who were ahead when the whistle went for the final time. The visitors started well and had 2 early goals on the board before we started to settle and get into our rhythm helped, by the move of Jackson Kearns to centre back who went onto have a very impressive game. The powerful Jack Dorney used all his strength to fire in our first goal rattling the net from close range, Jack Mulcahy also went close and then shortly after Jack D found his fellow corner forward Cillian Burke and he cracked home an excellent goal into the top corner, full forward Cian Moore raised a white flag to leave us behind at the first water break by the narrowest of margins 2-1 to 2-2. Scores dried up somewhat in the second quarter with defences on top and Ronan Musgrave, Sam Douglas, Ollie Killeen and Adam Lewis leading from the front as points from Jack D and a mighty score from Sam McAllister who was a ball of energy in midfield all through left us level at the break 2-3 apiece. We started the second half in determined fashion winning plenty of ball around the middle third with the industrious Max Daly prominent as Jack Dorney hit a great free over the bar from wide on the right with his trusty left boot and then Cian Moore who was very accurate from the placed ball all through hit a monster free over from distance. Youghal were awarded a penalty and Cormac Crowley was equal to the task deflecting the goal bound shot away to safety with his outstretched left boot, the visitors did find the net shortly afterwards for their only score of this quarter as our boys took control, a driving run by Jackson from centre back opened up the Youghal defence and he put Jack through on goal who made no mistake with a fine finish and then a brace of points from Cian saw us head to the water break with our tails up, leading 3-7 to 3-3. With a spring in our step we moved further ahead with two points of the highest quality the first from dynamic half forward Darragh Meaney and the second another beauty from Sam Mac before we were rocked with 2 Youghal goals, one of those another penalty award that was converted this time. Finding ourselves a point behind we refused to panic and up stepped Cian Moore to find the equaliser as we were deadlocked again 3-10 to 5-4 and heading for extra time. The sizeable crowd were being well entertained as both teams looked to summon their energy reserves in the deep heat of championship action with Ollie Killeen, Eoin Walsh, Josh Mac and Tom Walsh all going well, we struck the first blow when Jack Dorney carried the ball along the end line and passed to Cillian Burke who showed great coolness to palm the ball into the net, Youghal replied with a point and Jack D hit another wonderful score to leave us a goal up heading into the second period of extra time. The game then began to unravel for us as the visitors penchant for scoring goals put us on the backfoot hitting the net 3 times in a blistering spell, and great credit to our lads who refused to throw in the towel as Max Daly powered forward to strike a superb goal and Cian fired over 2 quickfire points as we went agonisingly close to rescuing the game, but alas it wasn’t to be and it was Youghal who progress to the final and we wish them all the best as we salute the two teams who gave everything they had in an excellent advertisement for underage football. Team & scorers Cormac Crowley, Jackson Kearns, Sam Douglas, Ronan Musgrave, Ollie Killeen, Josh McCarthy, Adam Lewis, Sam McAlister 0-2 Max Daly 1-0 Jack Mulcahy, Tom Walsh, Darragh Meaney 0-1 Jack Dorney 2-3 Cian Moore 0-7 Cillian Burke 2-0 sub used Eoghan Walsh

Rebel Og East U17 Division 2 Football Championship Semi Final: Aghada 2-11 Kiltha Óg 4-04 Our U17 footballers welcomed Kiltha Óg to Rostellan last Saturday morning in the semi-final of the championship. Our lads had qualified for the knockout stages after a good win over Mayfield a few weeks ago. We got off to a storming start with two early points. John Walsh swinging over a lovely point from play after a great team move. Unfortunately for Aghada, the shooting boots deserted our lads from here on as we kicked a number of poor wides which allowed Kiltha Óg a platform in the game. Kiltha used this platform well by pinning our lads in our half for a large period of the first half. A very important score came at a critical time as Tommi Oosthuizen pounced with a lovely strike to the bottom corner of the goal from 13 metres out to leave Aghada 1-3 to 0-3 ahead at Half Time. In truth, this probably wasn’t a fair reflection of the game with Kiltha after missing a number of scoreable chances. Although credit must go to the Aghada rear-guard who made several last-ditch tackles to preserve the scoreboard. Just after the second half commenced Aghada were hit with a sucker punch with Kiltha pouncing for a goal to tie up the scores. Things were to get worse for the home side when unbelievably Kiltha scored their second goal. So after about 10 minutes in the second half Aghada found themselves four points down after being three points up at the short whistle. The home side then looked to be in for a goal of their own but a block on the line led to the ball being forced out for a 45. Aghada’s answer to Niall Morgan made his way up the field and Cian O’Shea split the posts to leave his team only two points down. This score seemed to lift the whole team and now it was Aghada pinning Kiltha in their half. Ronan Murphy and Oscar Slye making notable turnovers in this period allowing Aghada to maintain their momentum. Fionn O’Callaghan stormed into the game here also driving forward with a number of balls. In this period Aaron Atkinson kicked two points after some good build up play from Cian Hegarty, Fionn O’Connell and Noah Devoy. Substitute Sean Busteed who worked his socks off when he was introduced for the injured Aaron Kearns at Half Time, then gained possession on the opposition 13 metre line and after a jink or two unleashed a fierce shot towards the top corner of the goal. The Kiltha keeper made a great save but like all good forwards Tommi Oosthuizen was on hand to gather possession and blast to the Kiltha net. Aghada were now in control and John Walsh had also converted another free. All Aghada had to do now was to see out the game and hold onto their three point lead as we entered injury time. However, this proved to be a lot harder than it sounded as a long hopeful ball from a free landed in the Aghada square and somehow the Kiltha player got a shot away which ended in the back of the net. Draw game and it looked like we were heading for penalties. While everyone on the bank might have being expecting the game to finish level at this stage Cian O’Shea was having none of it. Similar to former Cork Minor keeper Cian O’Leary in the All-Ireland Minor final in 2019 vs Galway, Cian had the ball out on the 21 in a flash. The ball travelled in the sky where Sean Busteed gathered brilliantly which allowed the home side set up one final attack. The ball was worked through the lines to Stevie O’Shea and he rounded his man and in doing so was fouled 30 metres out from goal. The kick was difficult for a right legged kicker but up stepped Man of the Match John Walsh. With big pressure on his shoulders, he lined up the shot and with silencing descending over Pairc Liam Ui Riain the ball sailed straight between the post. Moments later referee Shane Hodgins whistle sounded and after an extremely hard-fought contest against an impressive Kiltha side which included recently crowned minor hurler of the year Jack Leahy, Aghada had come out on top by the slimmest of margins to the joy of the home supporters. Best on the day for Aghada were Pete White, Conor Geary, Olivier Jordan and of course John Walsh. Aghada now face Killeagh in the final who swept away Mayfield in the other semi-final. Date and time TBC.