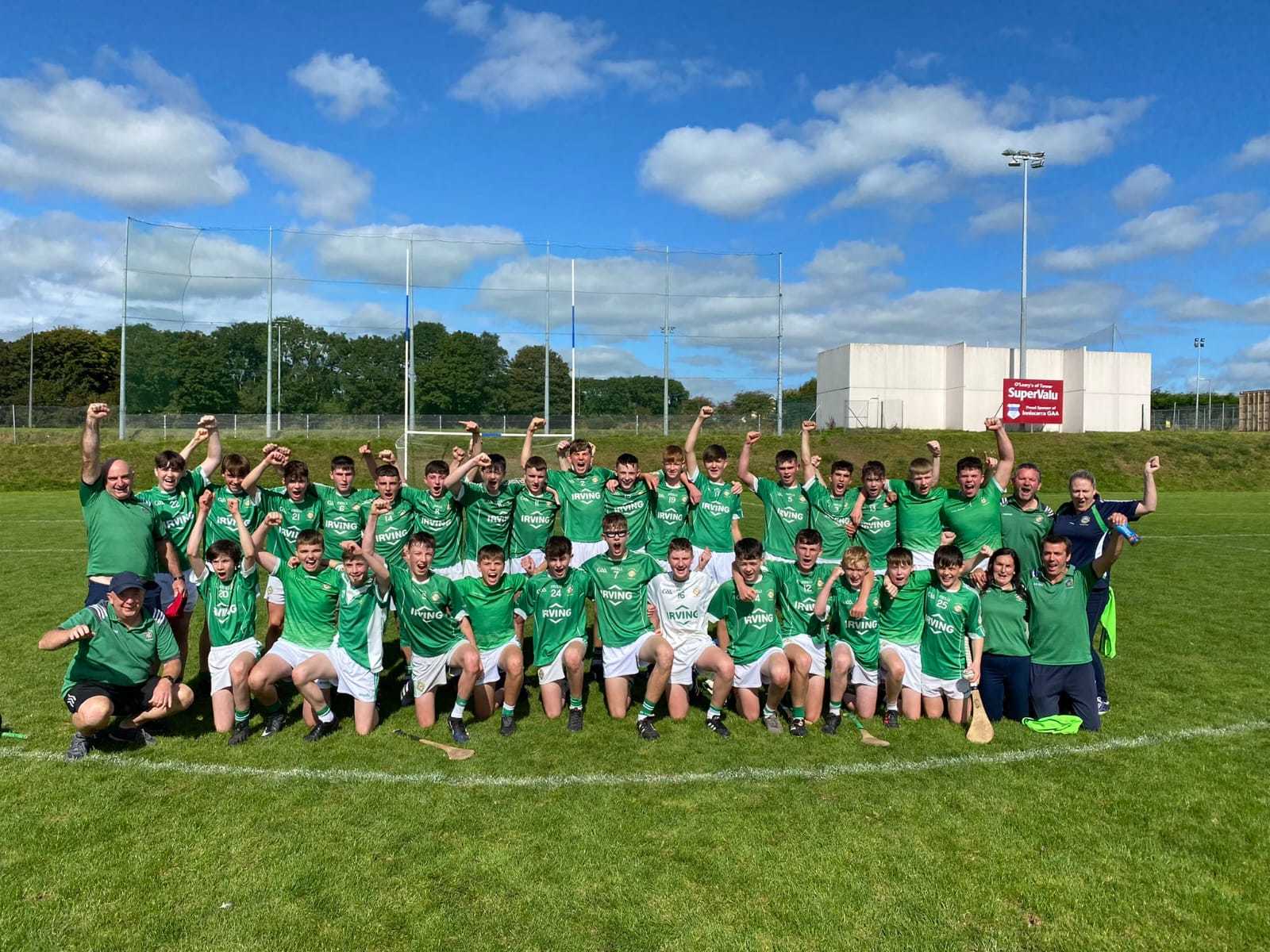 Hi folks what an amazing week for Aghada juvenile club as we commenced our U10 parish league competitions and the boys who played in those competitions only five and six years ago were winning a premier 1 hurling final, great credit to all who have helped in their development, the commitment, workrate, skill and never say die attitude brought them to glory on what will surely rank as one of the juvenile clubs greatest achievements to date. Also, in a memorable week the second U15 team and U12 hurlers qualified for finals as we look to the future with confidence. Many thanks to our over worked secretary Mark White and our excellent joint role CPO Anthony Oosthuizen who helped with info for this weeks publication.

Slip sliding away U15 football Youghal 4-4 Aghada 0-5. On a wet and miserable Sunday morning our U15 Div 1 football team made the trek to Youghal. The conditions had a big impact on the game, with the normal fluid passing game this side play disrupted by lost footings and dropped balls. The Aghada defence, led by Hugh and Seán Santos, were under pressure throughout, but coped well with the Youghal onslaught. Playing the ball to the forwards was the challenge in this game, with Youghal’s centre and full backs showing that as well as being big and strong, they had speed and skill also. Aghada struggled with forward play, and the big Youghal defenders dropped a constant barrage onto the Aghada midfield and back lines. Not the best day out for these players. Management were, as always with these lads, happy with the effort and application, but this was definitely one to put down as learning experience. Much to work on in training, and Chief Coach Declan has hinted at some tactical and positional changes to bring these lads back to their best.

U15 c3 Hurling semi-final Donoughmore 1-8 Aghada 3-15 For the second morning in a row our dedicated band of Players, Parents, Mentors and Supporters made a long trek, this time to Donoughmore to take on the home side in the semi-final and they were not to be disappointed as our lads put in another terrific performance to power their way into the final and a potential meeting with either Courcey Rovers or Ballinora who contest the other side of the draw. In a close first quarter we rattled off 5 points the pick from corner forward Nathanael O’ Driscoll as the home side drew parity with a goal on the stroke of the whistle for the first water break. We came out all guns blazing with our talisman Isaac Oosthuizen striking for 2 green flags and Isaac, Andrew Murphy and Jude Devoy pointing to put us in a commanding 1-3 to 2-12 half-time position, with Seán O’ Brien, Conor Bakx, Rodger McGrath and Colm White impressing. There was no let up from our boys in the second half all our substitutions paid dividends with Pierce Noonan scrambling home goal number 3 and more good work from Isaac and Jack Linehan had us in the ascendancy and dreaming of more final glory. Congratulations to players and management who are certainly delivering in spades this year. Team & scorers James O’ Donnell, Colm White, Evan Crowley, Cillian Falvey, Rodger McGrath, Colm O’ Donoghue, Seán O’ Brien, Jack Linehan 0-2, Conor Bakx, Andrew Murphy 0-1, Jude Devoy 0-5, Seán Corkery, Cormac Walsh, Isaac Oosthuizen 2-6, Nathanael O’ Driscoll 0-1. subs used Emmet O’ Keeffe, Pierce Noonan 1-0, Joe Connolly.

They say a good start is half the battle and that was certainly the case as our U12 hurlers produced a blistering first quarter to put Mayfield to the sword in the shield semi-final at a sundrenched Rostellan on Sunday morning. The opening exchanges were tense as both teams battled for supremacy, Robbie Oosthuizen converting a free after being fouled himself as Mayfield responded also from a dead ball situation, before our boys burst into life midfielder Donncha Walsh found corner forward Dara O’ Brien and he made no mistake crashing home a brilliant ground stroke. Soon after full forward Shay Rooney with a fine piece of high fielding billowed the net from close range and this was followed by a super Cathal Lowney point as the momentum was well and truly with the boys in Green. The icing on the cake in what was a really impressive spell of clinical hurling came when Kaylan Cunningham hit a rocket to the net to make the score 3-2 to 0-1 in our favour at the first water break. The second quarter was evenly contested with mighty battles all over the pitch, Eoin O’ Donoghue and Cormac Cashman solid in the corner back positions as they flanked the rock steady full back lynchpin Rossa White, outside them the majestic Finbar Alcock and Matthew Condon hurled supremely as centre back Jake Morrissey was his usual commanding self and with the midfield duo of Donncha Walsh and Eoghan O’ Shea dropping deep to help out at times, scores were at a premium just one point for either side, that suited us just fine, our score coming from a tremendous Robbie effort to leave the half time score 3-3 to 0-2. Mayfield to their credit took the game to us in the second half and fired over a few nice scores although we were not overly worried as composed goalkeeper Rian O’ Brien Higgins was keeping cool under pressure of course we wouldn’t make life easy for ourselves and late drama ensued to test the nerves of our large and vocal supporters, as Mayfield hit us with 2 quickfire goals to put 2 points between the teams, and in a hectic finish the wizardry of David Murphy came to the fore with two powerful runs being unjustly halted as Robbie dually obliged to send both frees over the crossbar and send us into the final 3-5 to 2-5. Team & scorers R O’ Brien Higgins, E O’ Donoghue, R White, C Cashman, F Alcock, J Morrissey, M Condon, D Walsh, E O’ Shea, C Lowney 0-1, R Oosthuizen 0-4 0-3f K Cunningham 1-0, D Murphy, S Rooney 1-0, D O’ Brien 1-0. subs used John Dorney, Dylan Kearns

Hannah Looney put in a tremendous midfield performance in the All Ireland camogie final last weekend, excelling in both defence and attack, scoring 2 quality points and in this scribes eyes was surely in line for player of the match if Cork could have managed to get over the line. I know its only a consolidation but Hannah will surely add another all star to her list of achievements after another wonderful year on the national stage.

More dates for your diary as our U10 parish leagues continue over the next few weekends with football on at 5.45 on Fridays and hurling Sunday mornings at 11.30 while also our famous club Willie Ryan U12 hurling competition takes place next Saturday morning at 10am in what will be the 40th running of the successful competition and 40 years since he passed away on February 19th 1981 so why not head down to Rostellan and enjoy the exploits of our younger generation.

The Go Games were once again in overdrive our U11 footballers were at a Blitz in Ballynoe and were in top form in all 3 Games with impressive displays our U10f were in Ovens at the fine Eire Óg Complex, our U9f in Castlemartyr, our U8f in Youghal and our U7f at home to KiIlleagh, Fr O’ Neills and Kiltha Óg in another blitz expertly organised by our own John Connolly and a big thankyou to all involved in making these such enjoyable occasions for all concerned.