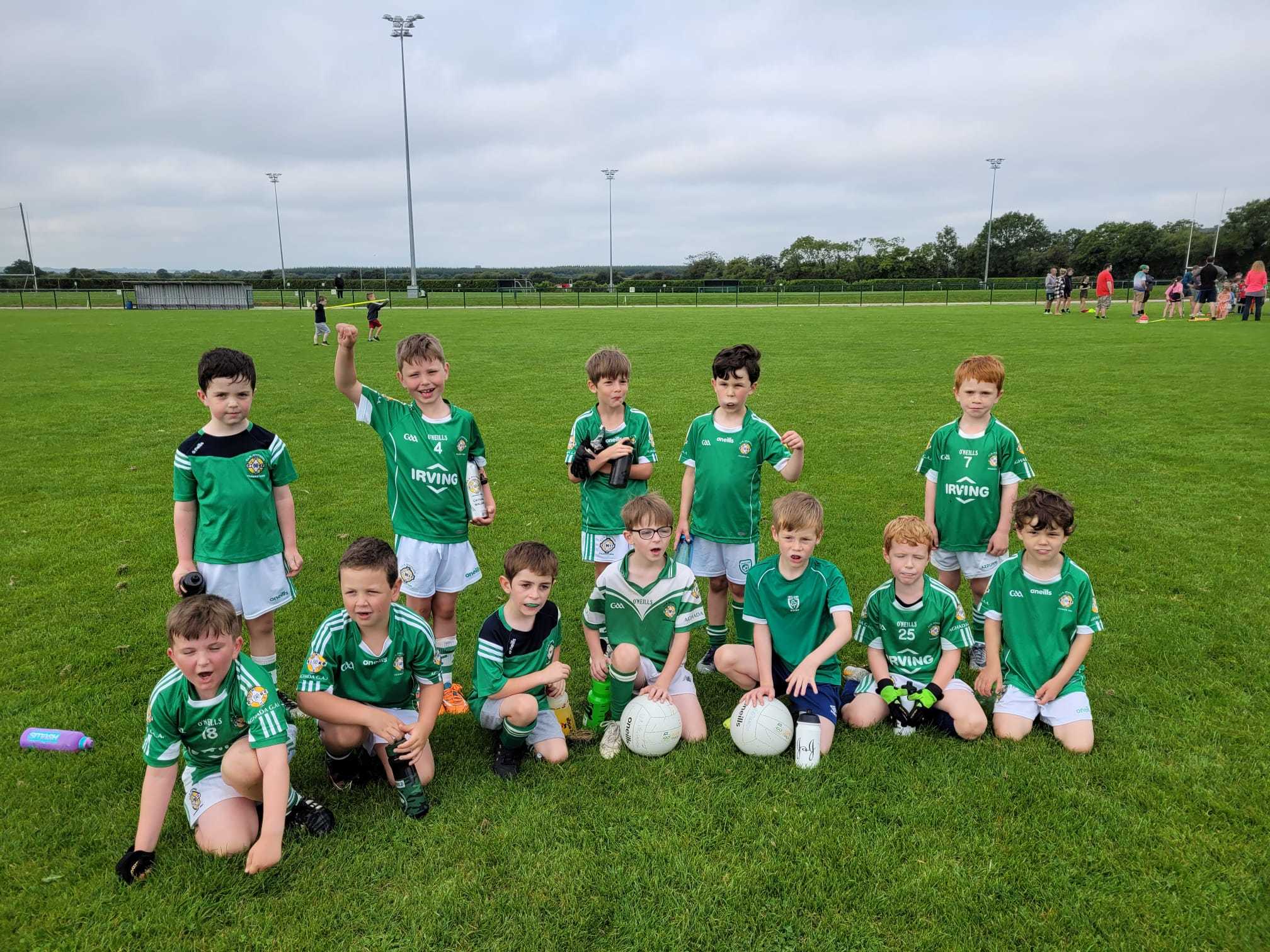 Hi folks, after the disappointment of the rebel hurlers in Croke park last Sunday we were soon transported back to the bread and butter of the club scene and the great escapism that the pure unadulterated action the juvenile games bring.

U13 Hurling report by Eric Walsh :Aghada U13 Hurlers played Youghal Friday night 20th August in the top field in Youghal. It had been raining heavily all day and the fog had set in on the pitch and it was touch and go whether the game would go ahead. After some discussions with both teams, the game went ahead. The referee threw in the sliotar at 7pm. Youghal started the brighter and immediately registered 2 fast points. Youghal continued to play well but were wayward in their shooting due to the pressure by the Aghada defence. As we headed for the first water break, Aghada had settled and were getting the better of their match ups throughout the field. From the first water break to the end of the game Aghada dominated large portions of the game. It was a tremendous team performance and all 18 players played a pivotal role on the night. What was most impressive about the victory for this team is that it was the first time in 5 years we have beaten Youghal! From U8 to U12 Youghal had dominated. Last year we got close but this year the lads had worked hard And the results are showing the improved performance. A lot done but more to do. A special mention must go to Cillian Scanlon for interrupting his holiday and travelling up from Wexford and Sam D who travelled through the night to get back, to don the green and line out for Aghada this eve, fair play. Aghada won the match on a scoreline Aghada 8-08 to Youghal 2-04.

Minor Premier 2 Football Shield Semi Final report by Vince Rohan Aghada 3-11 Glanmire 3-09 Our Minor footballers welcomed Glanmire to Rostellan last Wednesday evening for the semi-final of the U18 football league shield competition. In a good game of football, Aghada eventually emerged victorious. However, this victory was hard fought with a few very nervous moments towards the end of the game where Glanmire snatched two late goals to leave only two points between the teams. Thankfully our lads held on for a well-deserved victory. Cian O’Shea was excellent again for Aghada between the sticks with great kickouts and made a crucial save in the dying moments to ensure our lads held on for the win. Jack Colbert put in an immense shift in defence along with Donagh Collins. Diarmuid Byrne was his typical self, driving forward at every available opportunity along with slotting some lovely scores from play and frees. Eoin Motherway worked his socks off and played some lovely ball into our full forward line. Aghada now meet Carbery Rangers in the final who themselves defeated St. Michaels in their Semi final last Wednesday. The game is currently fixed for Cloughduv at 7pm on Monday evening. Aghada Panel Vs Glanmire: Cian O’Shea, Fionn O’Connell, Jack Colbert, Lachlan Greig, Aaron Kearns, Donagh Collins, Cian Hegarty, Seán O’Callaghan, Diarmuid Byrne, Stephen O’Shea, Eoin Motherway, Noah Devoy, Ronan Murphy, Scott Whyte, Pete White, Seán Busteed, Isaac Mirner, Conall Rooney, Ronan Walsh, Jack Dunne, Michael Corkery, Joshua Halpin, John Walsh.

U12 Football report by Dave Fleming A busy week for our u-12 footballers this week with three games in eight days. Also a number of our team have made the big step into secondary school so we wish them all the best with that. The second of the 3 matches was on Tuesday night away in Castlelyons. The Aghada boys got off to a flying start playing down the hill. Mathew Condon controlled the game at centre forward and scored a rapid 1-3 from play. Our midfield of Shay Rooney & Hugh O'Loingsigh remained on top to help the ball into the forwards to leave the lads leading at half time. A few tactical changes were made in the second half. Playing up the hill in the second half brought the best out of our back line. Conor Cronin, Kaylan Cunningham, Conor Padden, Rossa White & Ciaran Cashman led by example and were unbeatable. A special praise has to be given to our all-star goalkeeper Cathal Lowney who spectacularly saved a penalty in the second half to keep a clean sheet. Robbie Oosthuizen scored a top-class goal to keep us on top in the second half but the stand out performance in the second half was our super sub Davy Murphy who came on to grab himself 1-3. This was a great team performance and we finished the match winning 3-9 to 7 points.
A quick turnaround was the order of the week as we had to play a strong Douglas team on Friday evening at home in Aghada. We were missing a number of players as people were making the most of the last days of summer and sunny weather before everyone returns to school. Douglas started strong and despite the best efforts of our defenders were leading by the first water break. Aghada came back strong after the water break and a very intelligent goal by Donncha Walsh led us to be only 3 points down at half time. In the second half a great goal by Mathew Condon let the teams level and it was all to play for. But unfortunately there was a number of injuries to players and despite a valiant effort by all players and subs Douglas ran out winners by 5-6 to 2-5.
A big thanks must to given to several u-11 players who stepped up to the u-12 grade and all played very well.

U13 Football report by Cathal McAllister Two games this week for our U-13 Footballers. The first one was at home to Douglas 2 on Tuesday night last. Douglas were very understrength for this game and had only 13 players available to play on the night. Aghada started the game at a blistering pace and had some great scores from Tom, Cian and Alex. Douglas tried very hard to pierce the Aghada defence but found Cormac playing a blinder in goal, Eoghan, Sam D, Ronan, Adam, Sam M, Ollie and Jack M, keeping the Douglas forwards at bay. The lads had a comfortable lead at halftime. We ran out the bench for the second half and each of the lads played their part. Josh and Max were dominating in midfield and kept the ball moving fast into Jack D, Darragh, Donnacha, Richard, Cillian B with Austin and Zavier shouldering up the defence. Plenty of more scores came our way in the second half and we ran out comfortable winners on the score-line of Aghada 7-16 Douglas 2 3-4. The second game was away to St. Colmcillies on Friday night and this was a totally different game to one we had played on the Tuesday. This was a rip-roaring game of football with skill, heart and never say die attitude from the Aghada lads that saw us over the line. The first quarter of this tie was a very cagey affair with no side dominating. Both teams went in at the first quarter break on level terms two points apiece. The Aghada lads really thundered into the game in the second quarter and had goals from Richard and Jack D to leave the half time score Aghada 2-6 Colmcillies 0-5. Aghada started the second half where they left off in the first and had their third goal courtesy of Max. Colmcillies upped the ante and took the game to Aghada and had some good scores of their own. As we headed down the straight it was all to play for. We had a three-point lead with two minutes to play, went Colmcillies broke through the Aghada defence and rattled the back of the net to level the match. From the resultant kick out the lads worked a great move which saw Jack D put the ball in the back of the Colmcillies net to seal the deal for Aghada. Final Score Aghada 4-12 Colmcillies 2-16. Panel for both games: C. Crowley, J. Kearns, S. Douglas, Z. Schoeman, E. Walsh, A. Schoeman, A. Lewis, S. Mc Allister, R. Musgrave, J. Mc Carthy, O. Killeen, M. Daly, D. Meaney, R. Kelly, T. Walsh, J. Mulcahy, J. Dorney, C. Byrne, C. Burke, C. Moore, A. Buckley, D. Winter. We now have one game remaining against Youghal and if we get a result here it should see us through to the Final. Game to be played on the 10th of September @ 7pm in Rostellan.

Our U15 footballers were in championship action and produced a fine display to get the better of Kiltha Óg in sunny Rostellan last Thursday evening. We missed a few great opportunities early doors and once we found our shooting boots we never looked back. With Robert Dean and David Wallace on top at midfield they mixed the silk with the steel showing an awesome work rate but also the ability to pick off a series of deft passes that led to some important scores. David kicked our first point of the game and Samuel O’ Driscoll found the net with a peach of a goal as the early exchanges were tight as Kiltha replied in kind to leave the score 1-1 apiece. Then Samuel finished off a fine team move for goal number 2 and two frees from James Hurley and a fine individual effort from center back Hugh Mulcahy left the half time score 2-4 to 1-2 in our favour. We started brightly in the second half with James Motherway crashing an unstoppable shot to the back of the net after good build up play from David Wallace. The defence were on top with Rodger McGrath, Evan Crowley and Ronan Devoy showing well and forwards Seán Corkery and Colm White working tirelessly, also a big feature of the game was the excellent goalkeeping skills of Tomás Condon who kept the Kiltha forwards at bay with some timely interceptions and a few critical saves. We continued to trouble the scoreboard with well taken points and fine interlinking play involving Callum Roberts and James O’ Donnell as the best score was kept to last as Cian Murphy produced a defence splitting pass to find the well timed run of Finn Berry and his rasping shot just shaved the crossbar for the last point in an entertaining game. Final score Aghada 4-11 Kiltha Óg 1-5. Team and scorers Tomás Condon, Rodger McGrath, Seán Santos O’ Sullivan, Evan Crowley, Ronan Devoy, Hugh Mulcahy 0-2, Conor Bakx, Robert Dean 0-1, David Wallace 0-1, Seán Corkery, Samuel O’ Driscoll 2-1, Calum Roberts, Colm White, James Hurley 0-4, James Motherway 1-1. Subs used James O’ Donnell,, Finn Berry 0-1, Cian Murphy.
No joy for our U15 footballers in the Féile competition held in Castlemartyr. We were in a 3 team group winning our first game comfortably against Glenville 5-8 to 0-2 and then succumbing to Youghal by a solidarity point, this effectively ended our hopes as Youghal subsequently won their remaining game to progress. Hats off to the Castlemartyr and Kiltha Óg juvenile club who brilliantly organised the day with plenty of treats laid on by the committee and food truck Pan keeping all spectators and visiting teams happy.

Great action once again over the weekend for our young players in Go Games football, our U7s were in Killeagh, our U9s and U10s at home and our U11s were in Rathcormac, fantastic entertainment had by all and well done to all involved, you can’t beat playing games and in fairness to Rebel Óg they deliver in spades with their youth programme of blitzes and matches.

BE SEEN WEAR THE GREEN