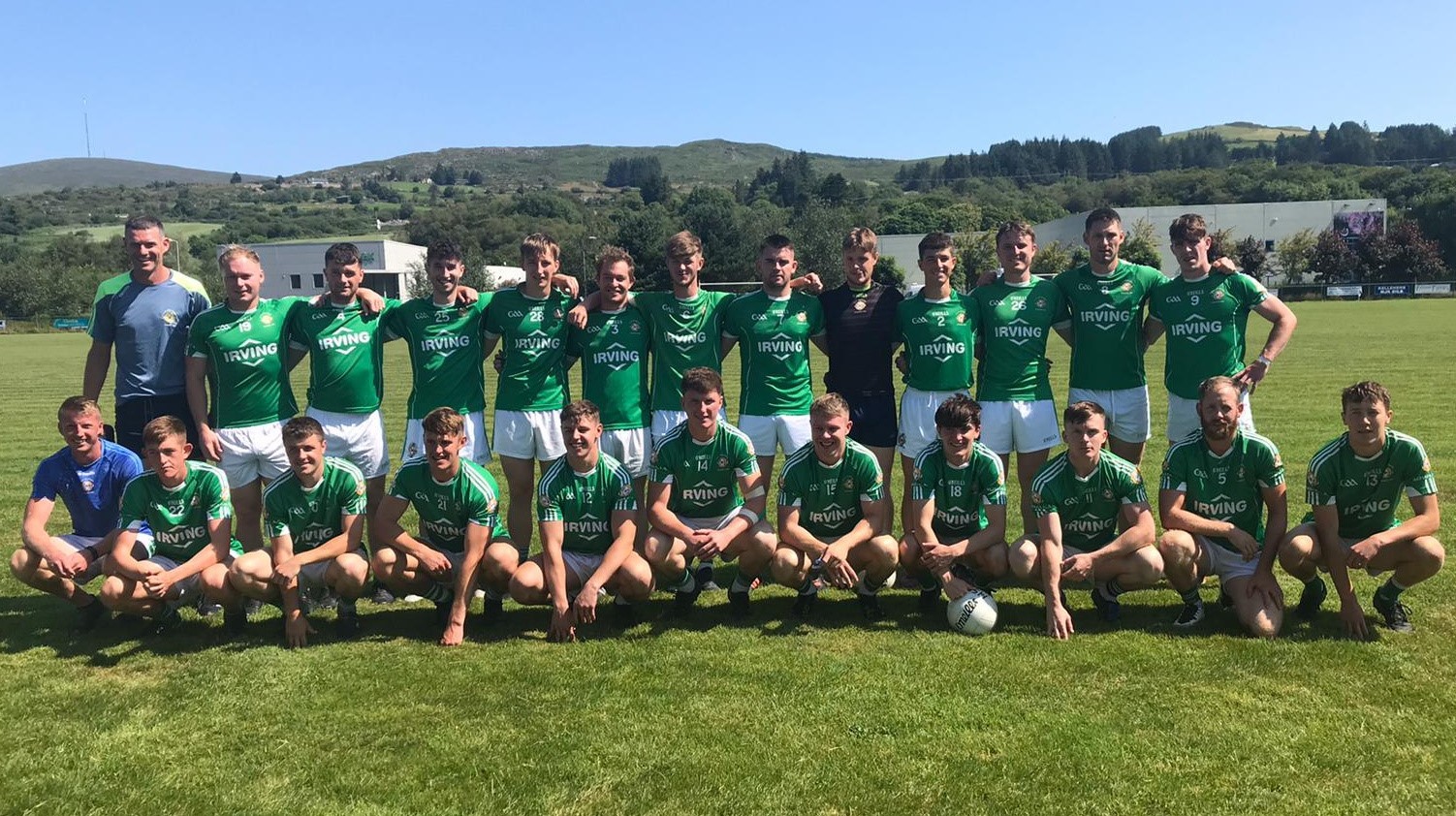 Our premier intermediate footballers made the long journey west to Ballyvourney last Sunday to play Naomh Abán in the semi-final of the Cork Credit Union division 4 football league. The game was billed as the curtain raiser to the Cork-Kerry Munster football final later that day in Killarney but in-fact this game on the Cork side of the border turned out to be the main game of the day. Aghada down a number of regulars got off to a flying start with two points on the board inside the first two minutes thanks to the clinical Danny Creedon. The first from play after good work from Kyle O’Shea and the second from a free after Kevin O’Hanlon was fouled. However, Aghada found themselves level pegging only five minutes later after Naomh Abán hit a purple patch and hit two points on the bounce. The young Aghada team recovered well, with Ed Leahy and Jack McDonell turning over Naomh Abán possession on numerous occasions which led to good build up play by Timmy Hartnett and Kevin O’Hanlon in the middle third. Aghada were patient with the ball and eventually worked the ball to the main scorer in chief on the day – Danny Creedon who split the posts twice from play with two excellent executed kicks. Again, though our opposition reeled us back in in a flash to leave the scores level at 4 points at the first water break. Aghada came out flying after the water break with Aaron Berry slotting over a lovely score after great kickout by Ciaran O’Shea to Kyle O’Shea, who fed Kevin O’Hanlon who in turn provided the assist to Berry. Danny Creedon then slotted a free after he was fouled himself after a great long-range pass from Diarmuid Byrne. Again, Danny split the post from a free moments later after Berry was fouled to leave Aghada 7 points to 4 up after 24 minutes. Hot on the heels of this score was the lively Kevin O’Hanlon who chipped in with a score after a lovely cross field ball from Kyle O’Shea. Naomh Abán then got a score themselves from a free. Ed Leahy was dominating his man at this stage, not giving him an inch to turn or pass, turned over the Naomh Abán full forward which led to the ball being worked through the lines through Donagh Rice, Shane Dorney and Aaron Stafford which eventually led to Kevin O’Hanlon being fouled after a long massy run through the opposition defence with Danny Creedon dually obliging from the placed ball to leave Aghada nine points to five up at half time.

With weather conditions at boiling point, it was the sanctuary of shade in the dugout most of our lads needed at this stage and a bit of sun cream! Of course, there was a few exceptions to this with Kyle O’Shea choosing to work on his suntan while he had the chance. After the break, Aghada turned to face the wind with their four-point lead. The Aghada management introduced some fresh legs at half time with Mark McCarthy being called upon to enter the fray. Unfortunately, with the wind at our hosts backs they had us reeled in within 15 minutes to leave the scores level at nine points each. With the water break on the horizon Aghada picked a great time to show some composure to work the ball up the field with the ever-industrious Tim Hartnett and young Donagh Collins carrying the ball up the field before feeding Danny, who again made no mistake and split the posts to leave Aghada up a point entering the final quarter. At this stage Philip Moore and his management had rung the changes to get fresh legs on. With 5 minutes left Aghada looked in big trouble as Naomh Abán went four points in front after scoring 5 on the bounce. Although it must be said it could have been more had it not been for great defending at different stages from Ben Stafford and Jack Norris. However, our lads to their credit never showed any signs of panicking and got their ultimate reward when the ball was fed to Aaron Berry around the halfway line. Berry made a Kyle Hayes esque run through the centre of the Naomh Abán defence, and with players hanging off him, somehow got a great shot away. The Naomh Abán keeper made a wonderful stop but Kevin O’Hanlon was on hand to bundle the ball over the line to inject real hope into the Aghada cause and leave us only one point down with 3 minutes to go. Great credit must go to the referee here who played a great advantage for the goal. Aghada now had the opposition on the racks, and with the clock entering injury time, Aghada patiently worked the ball through the hands, with Luke O’Connell feeding Berry who booted the ball towards goals where Diarmuid Byrne gathered possession and was fouled in front of the goals making it easy for Danny to slot over to level the game. It looked all but certain that this would send the game to extra time however there was to be another twist. Naomh Abán worked the ball up the field from the kickout and managed to score what looked like the winner. This was not to be the case however, as Ciaran O’Shea, who had a great game between the sticks, had the ball back in play in the blink of an eye which enabled Aghada to have one more attack. The ball was worked to Danny Creedon who showed nerves of steel to split the posts from a tight angle to send the big travelling support wild. Unbelievably, from the kickout Aghada won possession but unfortunately were unable to work a shooting opportunity and in the process lost possession which gave Naomh Abán one last chance but thankfully for Aghada, Donagh Collins and Mark Healy were on hand to slow the attack up which meant we were heading to extra time with the scores level at 1-12 to 0-15.

Into Extra time we headed and with the conditions so hot, Aghada emptied their bench with Shay Keane and Dan Leahy introduced. Aghada had a slight breeze behind them in the first half but disaster struck when Naomh Abán pounced for a goal two minutes before half time. The game could have been over shortly after when Naomh Abán went through on goal again only for Ciaran O’Shea to make a crucial save with his feet to keep Aghada in the game. Aghada were handed a lifeline when Naomh Abán were reduced to 14 players with a black card when Mike Russell was taken out off the ball. It was Russell who immediately used this advantage to start to eat into our hosts lead, fisting over the bar after great pass from Tim Hartnett. This sent us into half time of extra time two points down. A couple of minutes into the second half Danny Creedon scored the score of the game from forty metres out after good build up play from Jordan Tynan and Mark McCarthy. This left Aghada one point down with 6 minutes left. Rumours were at this stage that Philip Moore and his management were thinking about who their 5 penalty takers might be and with the young Pearse O’Neill sitting on the bench, they were considering channelling their inner Gareth Southgate and sending him into the fray. After Naomh Abán widened their lead again, Donagh Collins made yet another surging run up field to feed Danny who again finished with aplomb. However, this was as good as it was to get for Aghada with Naomh Abán pulling clear in the closing stages to win on a score line of Aghada 1-15 Naomh Abán 1-18.

Aghada who were down a couple of regulars will be very happy with their performance. Some great performance throughout the team especially in sweltering conditions. Best on the day were Ed Leahy, Tim Hartnett, Aaron Berry, Kevin O’Hanlon and Danny Creedon. Aghada will now look forward to championship in a few weeks after a solid league campaign.

Aghada came up just short in a ding dong battle with Lisgoold in the 2nd of our round robin championship games. A game that went down to the wire and while Lisgoold had a winning lead for most of the second half, Aghada almost snatched a draw at the last minute. Trailing by 3 points and an incredible 8 minutes into injury time, Aghada’s best player on the night Shane Bennett broke in on goals and fired a rasper of a shot that went just millimetres over instead of under the bar. Considering the same player rattled the crossbar and Luke O’Connell was finger tips away from a certain goal, Aghada had probably done enough to earn a draw. A couple of more minutes were played but no more chances came Aghada’s way and Lisgoold held on for a victory that in all likelihood ends Aghada’s interest in this year’s competition.

Aghada did start well. Bennett, who would finish with 1-5 from play, opened the scoring after 3 minutes. Points from Eoin Motherway and Jamie O Hanlon quickly followed before a stronger and more physical Lisgoold side got motoring. They rattled off 4 unanswered points to take the lead, before Bennett and Max Ahern snatched it back for us. Lisgoold were on top now and dominating possession, but Aghada were dangerous on the break. Lisgoold hit 4 points in the 2nd quarter. Aghada had a second Motherway point in reply plus a very well taken Jamie O’Hanlon goal as the short whistle approached. It meant we led by the smallest of margins at the interval.

Only a minute after the restart, the lead changed hands yet again as our opponents hit 2 quick points. Next up the pacey Bennett left defenders trailing in his wake but his attempt crashed off the underside of the crossbar. The same player pointed a minute later. But then on 8 minutes Lisgoold struck for their 1st green flag to lead by 3 points. Yet again the lead was snatched back; again it was Bennett leading the way. He pointed 1st had then broke through for the goal he had been threatening. From here we saw the reverse of the 1st half. Shane Dorney and Aiden O’Connell got on top in the middle of the field to help Aghada to the majority of possession, but now it was Lisgoold that were effective on the break. They hit 3 unanswered points and then on 28 minutes scored a second goal which looked like it wrapped up the result there and then. Credit Aghada’s young footballers, with Jack Norris driving on from defence, they never gave in and came back fighting. Alan Hogan and Scott Whyte both pointed before Shane’s last attempt to rescue the result, but when all was said and done Lisgoold had 2 points to spare on the scoreboard at the final whistle.

Our Jb hurlers made it 2 wins out of 3 in this year’s East Cork league after an entertaining contest against Dungourney. With a win against Russell Rovers and a defeat to Youghal, it was important to win this time out and goals from Ger Lynch and Jamie O’Hanlon helped Aghada to do just that in this away fixture to the Duns. Aghada were grateful to a fine performance from Luke O Connell between the posts. Outside him Riche Bull was very solid at corner back . Aiden O Connell and Mathew Leahy dominated at midfield with Leahy and Jamie doing the most to keep the scoreboard ticking over for Aghada.

Aghada Juvenile GAA News Hi folks, the excitement has be...

A Chara, A few short notes this week from Costa Del Salee...

A Chara,It’s safe to say that championship action is now ...

A Chara,A short newsletter this week to detail ticket req...