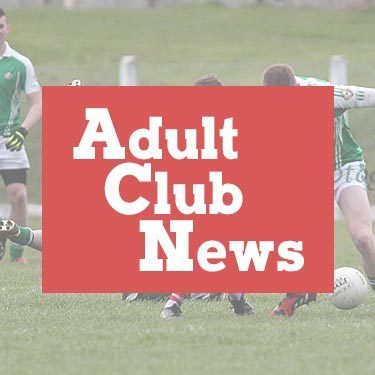 At our AGM Eoin O’Neill was once again appointed to look after our 1st football team, who will this year ply their trade at the Premier Intermediate level. Alan Morrissey has recently been appointed to take charge of our Premier Intermediate hurlers. Cian Fleming and Trevor O’Keeffe who were appointed to take charge of U21 hurling at our AGM, have subsequently also taken charge of the same age group in football. Paul Kilbane is manager of our 2nd football team, who will be in the Junior B grade in East Cork this year, down from Junior A. Our second hurling team, also playing at Junior B level will be managed by Aiden Kelleher. Mattie O’Connor will once again look after our third adult football team at the Junior C level.

So we thank all that have stepped up for the club for the coming season and we wish the best of luck to all our mentors, players, and teams for the coming year.

The draws for our 1st teams was made this week. In football we play Na Piarsaigh in the 1st round. A fixture we saw on more than one occasion at senior level in the recent past. The hurling draw drew a collective Ooooouhhh! from the room when we were paired with near neighbours Cloyne in the first round of the hurling. So no pressure then Alan !! #baptismoffire !!

A sure sign it’s all systems go for the new year – Vera and Gill have reopened the club shop on Saturday mornings from 10:30-11:30am. New stock in store for the new season, and as always Vera is happy to model any and all items!!

The East Cork board are holding a fundraising draw with all clubs in the barony asked to support it. €6 from each €10 ticket sold by Aghada will stay in the club. 1st prize includes 2 premium tickets for Pairc Ui Chaoimh aswell as free access to all club Gaa games in Cork in 2019. There are cash prizes for runners up. Tickets can be purchased from the Juvenile or Camoige committee members or from our secretary Darren Lee.

Having regraded from Senior to the Premier Intermediate football ranks for 2019, we played our 1st competitive game of the year against Nemo Ranger’s second team last Sunday in Rostellan. Played in sunshine on our forest pitch, which provides great shelter from any winds, the game was played in ideal conditions. While Aghada had more possession early on, a Cian Fleming point from play was all they had registered before the game, and Nemo in particular, burst into life on 7 minutes. They scored two fine goals in consecutive attacks and it would have been three goals from three consecutive attacks but for a fine save from Aghada ‘keeper Ciaran O’Shea. When the city men pointed from play on 10 minutes they were 2-1 v 0-1 to the good. Next it was Aghada that went on a rapid fire scoring burst. With Aaron Berry and Shane Bennett showing well upfront, Aghada kicked 4 points in as many minutes to leave 2 between the sides on the 15 minute mark. The rest of the half was a tit for that affair, with Nemo kicking 4 points to Aghada’s 3 points before the short whistle, which left the visitors in front by 3 points.

With the O’Neill brothers prominent, Aghada took over on the restart. The 1st attack saw Tom O’Neill have a goal attempt saved well by the Nemo ‘keeper. Next Fleming pointed on the burst, before Pearse O’ Neill kicked his 3rd of the contest after being set up by Berry. Next up another Aghada goal chance, this time the Nemo custodian saving well from Shane Bennett. Undeterred, Danny Creedon pointed a free as Bennett had been fouled in the build up, and then Berry beat a number of defenders to point Aghada into the lead after just 4 second half minutes. A super Creedon point from play on 7 minutes made it a 2 point game. Nemo opened their second half account a minute later, which Fleming cancelled out with a ’45. With 20 minutes to play it was 0-14 v 2-6 in Aghada’s favour. Next up Nemo hit 3 more minors, one from play and two dead balls. Aghada rallied again and Pearse and Berry kicked 2 excellent scores to leave Aghada a point to the good with 5 to play. Next however came the decisive score, when Nemo snuck in behind the Aghada defence to score their 3rd goal of the contest. With a minute to play Aghada, through Cian Fleming, reduced the deficit to the bare minimum, but try as they might they couldn’t find the equaliser that would have sent the game to extra time. Overall a good game of football and a good performance to start off the year, but just came up short on the day in terms of the result.

The current jackpot is €9,250 and the next draw is on Thursday 24th in Rosie’s Bar. Last week’s numbers were 2,8,13,14. There was no jackpot winner, but congratulations Robert Stafford, Tricia O’Leary, Paul Kilbane, Ciara Burns and Don Corrigan who each won a €30 lucky dip.