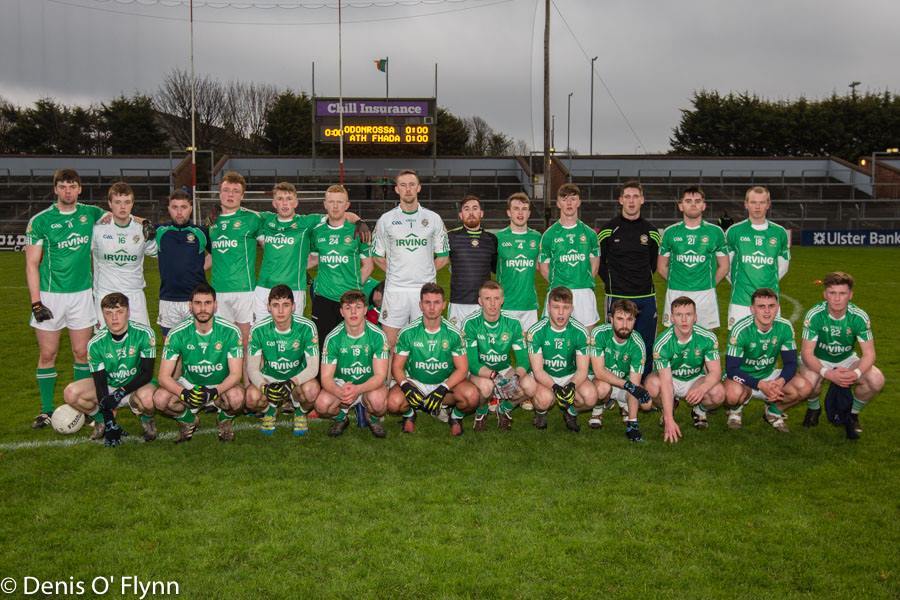 Having regraded from Senior to the Premier Intermediate football ranks for 2019, we played our 1st competitive game of the year against Nemo Ranger’s second team last Sunday in Rostellan. Played in sunshine on our forest pitch, which provides great shelter from any winds, the game was played in ideal conditions. While Aghada had more possession early on, a Cian Fleming point from play was all they had registered before the game, and Nemo in particular, burst into life on 7 minutes. They scored two fine goals in consecutive attacks and it would have been three goals from three consecutive attacks but for a fine save from Aghada ‘keeper Ciaran O’Shea. When the city men pointed from play on 10 minutes they were 2-1 v 0-1 to the good. Next it was Aghada that went on a rapid fire scoring burst. With Aaron Berry and Shane Bennett showing well upfront, Aghada kicked 4 points in as many minutes to leave 2 between the sides on the 15 minute mark. The rest of the half was a tit for that affair, with Nemo kicking 4 points to Aghada’s 3 points before the short whistle, which left the visitors in front by 3 points.

With the O’Neill brothers prominent, Aghada took over on the restart. The 1st attack saw Tom O’Neill have a goal attempt saved well by the Nemo ‘keeper. Next Fleming pointed on the burst, before Pearse O’ Neill kicked his 3rd of the contest after being set up by Berry. Next up another Aghada goal chance, this time the Nemo custodian saving well from Shane Bennett. Undeterred, Danny Creedon pointed a free as Bennett had been fouled in the build up, and then Berry beat a number of defenders to point Aghada into the lead after just 4 second half minutes. A super Creedon point from play on 7 minutes made it a 2 point game. Nemo opened their second half account a minute later, which Fleming cancelled out with a ’45. With 20 minutes to play it was 0-14 v 2-6 in Aghada’s favour. Next up Nemo hit 3 more minors, one from play and two dead balls. Aghada rallied again and Pearse and Berry kicked 2 excellent scores to leave Aghada a point to the good with 5 to play. Next however came the decisive score, when Nemo snuck in behind the Aghada defence to score their 3rd goal of the contest. With a minute to play Aghada, through Cian Fleming, reduced the deficit to the bare minimum, but try as they might they couldn’t find the equaliser that would have sent the game to extra time. Overall a good game of football and a good performance to start off the year, but just came up short on the day in terms of the result.