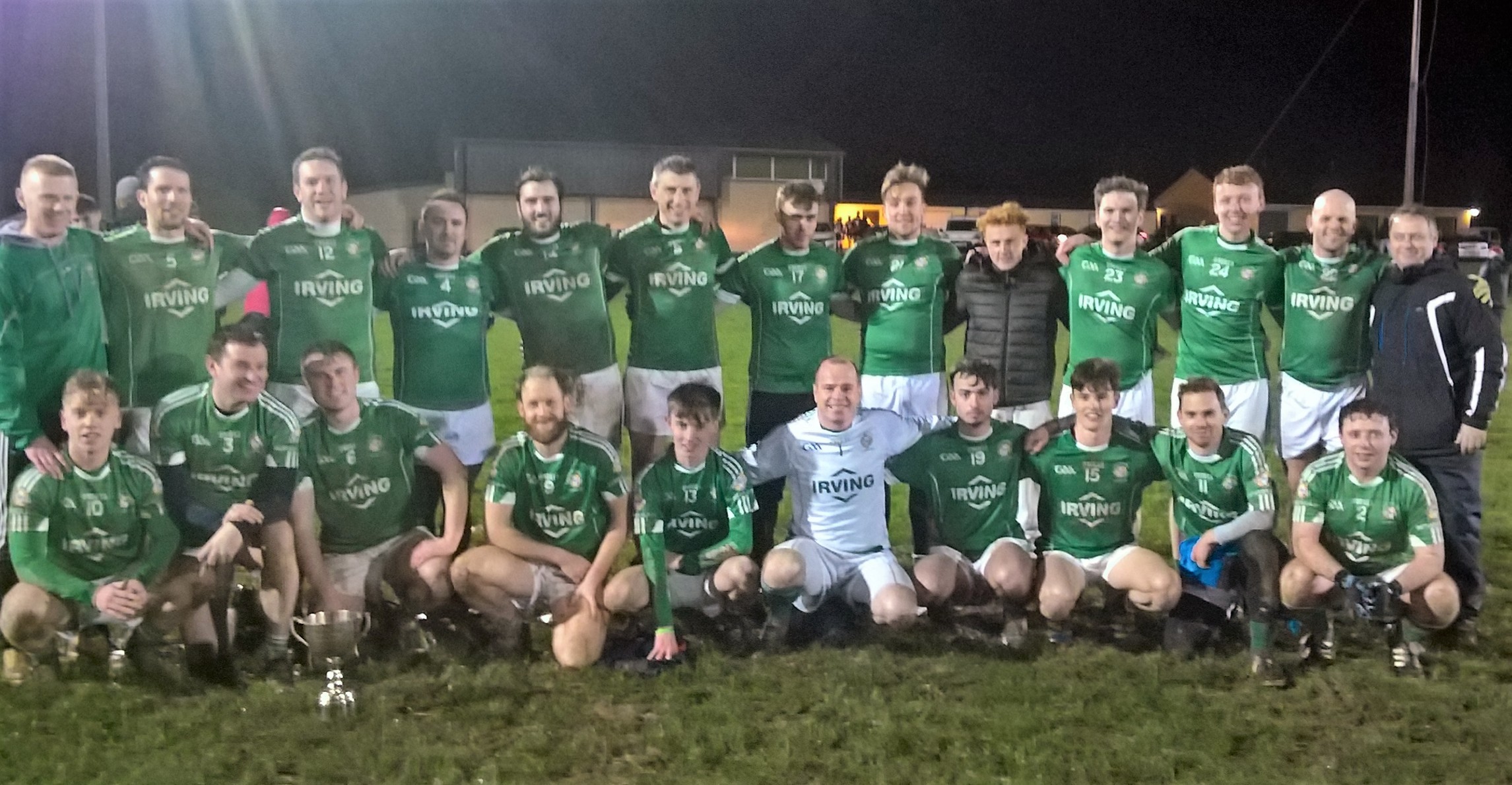 As Christmas approached, Aghada’s JC’s had good reason to start the celebrations early, when they became East Cork champions after a clash of the third teams of old rivals Aghada and Glenville. The game started in a heavy rain shower, but it didn’t deter the visitors as Glenville dominated the early exchanges and hit two fine scores from play. They should have scored more, but some poor misses allied to some excellent defending from among others Richie Condon and Mark Healy, kept the score down. Aaron Stafford and Darren Malone slowly got into the game at midfield and Aghada were soon off the mark. On 10 minutes, a clever flick up from wing back Cal Bawden, who then set Will Guiry in on goals and the wing forward drove in from the right sideline, before pointing smartly. Glenville responded with a converted free on 15 minutes, but over the next 10 minutes Aghada drew level. 1st Stafford, who had missed a few sighters, pointed an excellent effort, and then Aghada’s best player on the night, Niall Hill, set up veteran Stephen O’Keeffe on 24 minutes. The crowd held its breadth, but Keeffe unusually split the posts on this occasion and the game was tied on 3 points apiece. A second Glenville free with 2 minutes to the short whistle was the difference between the sides as they headed for the dressing rooms at half time.

Glenville had left Aghada out in the rain before the start of the game and they repeated the trick at half time as they stayed in the dressing room for a prolonged period. The Aghada sideline fell for the trick again, and O’Connor and Walsh really need to get to grips with this tactic going forward. It looked like a master stroke for Glenville when they pointed 2 minutes after the restart to extend their lead. However now Aghada really got into gear. Alan Walsh and Rob Whelan got completely on top in the full back line. Ronnie Power and Bawden thundered into the match in the half line and Michael Morrissey, who was introduced at half time, was to have a huge influence on the game for the second half. He set up Hill for a point from play on 4 minutes and then kicked a great score himself 2 minutes later after linking well with O’Keeffe. Next it was Jack Farmer’s turn to stamp his authority on proceedings. The self proclaimed star forward of the team had spent most of the 1st half on the ground. But as they say, form is temporary, class is permanent, and now Farmer showed his class. His fine solo run and clever off load set up Hill for his 2nd of the night. Next he expertly pointed a free after Keeffie had been fouled. He scored another 3 minutes later, this time it was Hill who had been hauled down. In between these frees Stafford had kicked a super 2nd point after Power and Healy had driven out of defence. So with 16 minutes played it was Aghada 9 points, Glenville 5. Our opponents stopped the rot on 18 minutes with they kicked the score of the game from distance on the right sideline. Hill was becoming virtually unmarkable and he benefited greatly from the space created by the perpetual motion of Jack Hayes and Vincey Rohan in the Aghada inside line. Impressive substitute Decky Morrissey set Hill off on 23 minutes and after easily rounding his man, the young forward pointed again. Glenville of course just never give up and they orchestrated a good goal on 24 minutes to leave just the bare minimum between the sides. All credit to Aghada however, they refused to let this setback break their momentum. John Connolly in goals was unerring with his kickouts, time after time, picking out his man with pinpoint accuracy. At times it was an Aghada man. Other times it wasn’t. The next score was vital and it came Aghada’s way thanks to Hayes pushing his weight around on the edge of the Glenville square. The full forward won a great ball but saw his attempt at goal blocked. The rebound fell to Decky Mor who made no mistake with a nicely taken point. 2 minutes later speedster Hill took off on another run. This time he was almost decapitated and again Farmer remained composed and pointed the resulting free. By now Calum Fletcher and Matt Leahy had been introduced and their fresh legs helped Aghada maintain their dominance. Fittingly it was Hill who had the last point of the game. Again it was Hayes with the assist, and again it was a brilliant run and finish from the corner forward. Oisin Counihan was introduced to bring some composure to help Aghada see the game out, and the young minor player didn’t put a foot wrong while he was on. When the final whistle sounded, Aghada were the deserving winners on a 13 point v 1-6 scoreline. Captain Mark Healy accepted the cup on behalf of this teammates and great credit is due to players and management on bringing some more silverware to the club so late in the year. Well done to Mattie O’Connor and Brian Walsh for keeping this team going and putting a great effort into it all year.