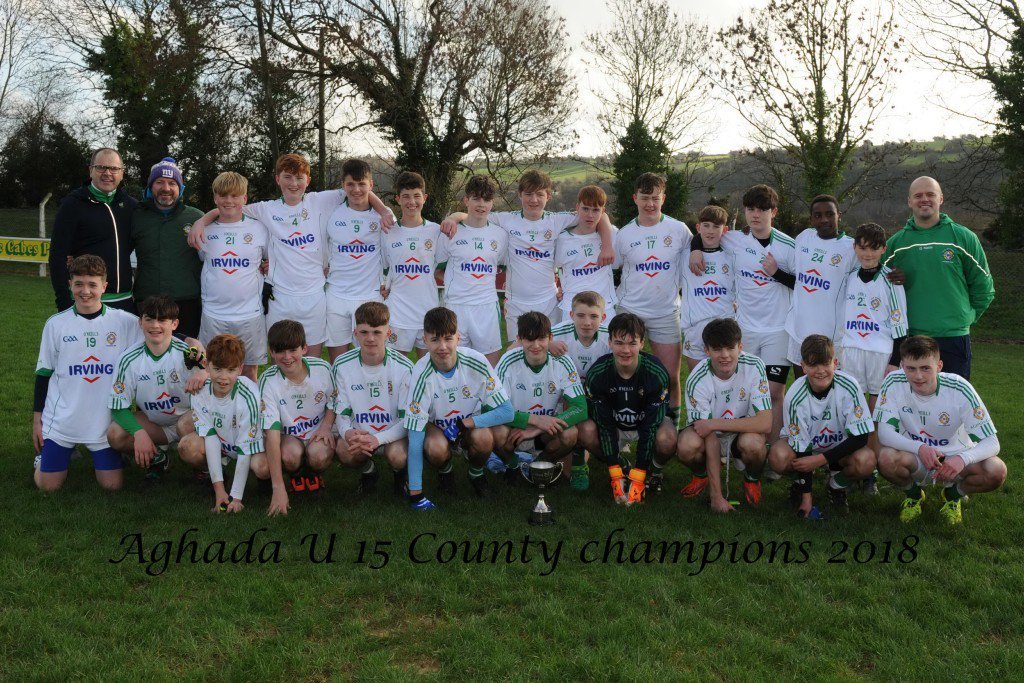 A long year is nearly at an end - U15 league final to come and U16 for some- but these boys are used to playing in the toughest of conditions.

Aghada (wearing white) had the wind advantage from the throwin but it was Kilmurry that did all the early pressing. There was no real penetration due to good defensive work and over elaboration from Kilmurry. Jack Corkery , Kalem Keane and Donagh Collins swept in on numerous attempted Kilmurry passes and tried to get the Aghada lads moving.

Eventually Fintan Cody opened the scoring on 7 minutes from a free after a foul on Eoin Motherway. From the kickout an interception by Jack Colbert from the Kilmurry keeper was calmly punished by Jack. The next score resulted in a long kick pass from Oran Crowe around midfield to Fintan on the left wing who found Moths and he swung over the 3rd socre to make it 0-3 to 0-0. And the East Cork boys pushed on gradually from here. Scott Whyte made the trek up from wing back for 2 scores, the 2nd having started his run on his own 65, split by another Fintan free in top left corner, difficult for a left legger!

Aghada leading 6 points to no score after 15 minutes. Fintan continued his accuracy from dead balls and slotted one over from just short of the 45- Derick had to have a nice calm word with the scoreboard operator after this. Kilmurry eventually got off the mark in the 29th minute and the score at HT was 0-8 to 0-1 to Aghada.

Ronan Murph Murphy came on at HT for Shane Lewis and Murph was slotted into the defence a few minutes after the restart as he was a bit sea sick at corner forward. Kilmurry got a couple of scores and then on 9 minutes Cody popped up for his first of 3 goals. With 40 minutes gone Aghada now lead 1-9 to 0-3. There was a direct approach evident from Kilmurry especially with the wind advantage and from 1 to 7 Aghdada locked up the defence (but didnt really throw away the key) assisted by Lachlan on the 45th minute who had dropped back between the 2 lines of defence and broke up a promising Kilmurry attack. Fintan gets his 2nd goal and on 46 minutes the score reads 2-10 to 0-4. Danny McCarthy was introduced up front and Fionn O' Connell came in at the back, Aaron Atkinson also bringing fresh legs to the attack.

And this is where Kilmurry had their best spell (maybe Donagh should have thrown away that key) despite Cian O' Shea defying the wind by getting great distance on his kickouts and clearing the 45 time and again, Kilmurry did not allow Aghada to finish out the game in style. Aghada were to score once, a goal in this spell while Kilmurry kicked 6 points.

Both teams kicked more or less the same points with the wind but Aghada did far better against it, scoring the 3 goals and as they say , goals win games. Aghada win on a score of 3-10 to 0-10. And may meet again.....