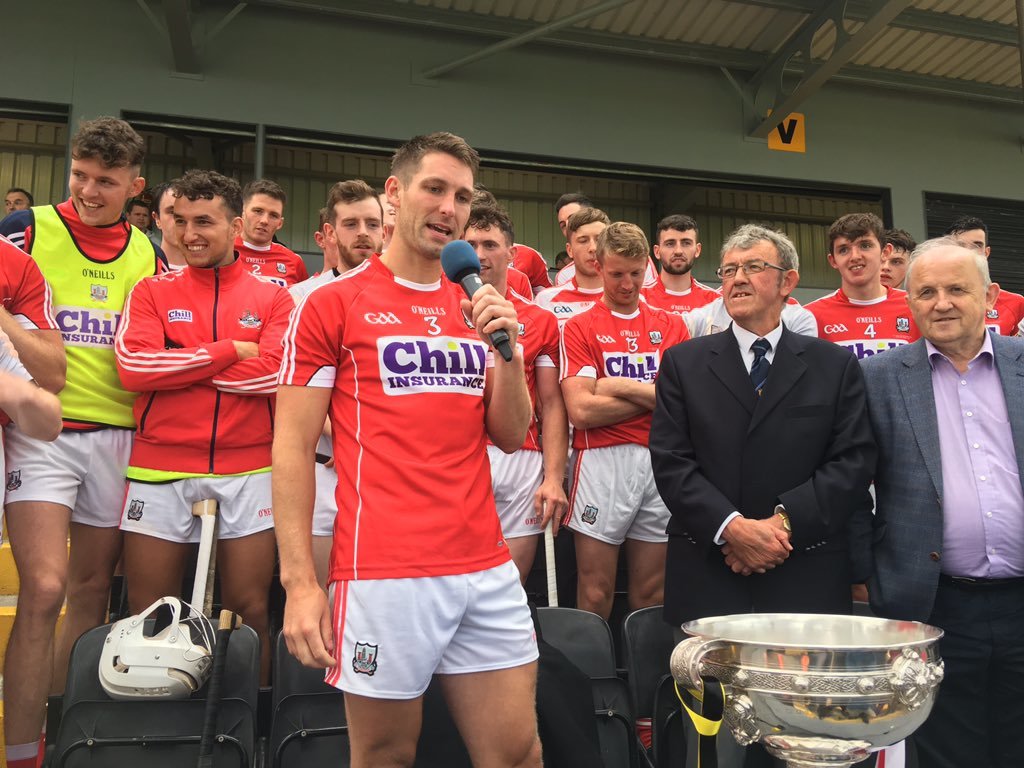 Published: about 2 years ago

In as high a scoring contest as you are likely to see this year, Aghada emerged victorious by a single point in this year’s U21 hurling 1st round. The win came courtesy of a very difficult free in the 61st minute. Aghada had lost a 6 point lead in the closing 10 minutes of this absorbing contest, and now Mark McCarthy, who was excellent from placed balls all night, stood over the free right out on the sideline. The young forward kept cool under pressure and slotted the sliothar between the uprights and Aghada had their victory.

The action on the night opened with a fine save from Ciaran O’Shea in the Aghada goals, and thereafter Aghada quickly settled into their stride. With a quarter gone, we led 1-4 to a goal. Kevin O’Hanlon was our goalscorer, albeit, the goal itself was a soft one for Ahan to concede. On 20 minutes, Hanlon had his second goal and this one was a super score. Charlie Terry was the standout player on the night, with some outstanding catching and point scoring and when he superbly hit Aghada’s third goal 2 minutes into 1st half injury time, it gave Aghada a commanding 7 point lead at the break. That 3rd goal was the result of some excellent work from Marcus and Mathew Leahy.

4 minutes after the restart, Charlie had his second and Aghada’s fourth goal, this time from a penalty, and it looked like we would kick on to a comfortable victory from here. Gradually Ahan Gaels came more and more into the contest. They hit 9 points in the next 15 minutes to Aghada’s 5 points. Aghada scores were brilliant points from O Hanlon x 2, McCarthy , and two more for Charlie including one fantastic strike on 43 minutes. So with 10 minutes to play it was Aghada 4-12 v Ahan 1-15. Next up however, Ahan were awarded a penalty, which they goaled. 3 points apiece were then exchanged by both sides, before a second Ahan Gaels goal on 56 minutes brought the sides level. They took the lead two minutes later, but only briefly, before Mark and Charlie had Aghada in front again as the clock started to run out. Ahan equalised again on 60 minutes, before Mark hit that free to seal and incredible win for Aghada. When you think there were 8 scores in the closing 5 minutes alone, you get some idea of how end to end this game was. Both sides are still in the championship, so who knows a rematch might be in the offing down the line!

The night after the U21 success, it was straight back out with the hurleys again, as Aghada faced Ballincollig in this year’s league. Ballincollig with the aid of the wind, were the better outfit in the 1st half. Leading 3 points to one, as the game entered the 10th minute, they struck for what would prove to be the decisive score. Their full forward made a good catch and did a neat offload, but the shot from the Ballincollig forward took a huge deflection to pass Trevor O’Keeffe in the Aghada goal. It didn’t look good for Aghada as apart at all from the wind, the visitors were on top in nearly all sectors of the field. With 5 minutes to the break, they led 1-7 v 0-2. Aghada had yet to score from play, with both points coming from Cian Fleming frees. On 26 minutes Aghada did create a goal chance of their own, but corner forward Kevin O’Hanlon blazed just over the bar. With the last puck of the half Ballincollig made it a 1-8 v 0-3 halftime score.

Unfortunately for Aghada, the wind seemed to die somewhat at the start of the second period. But it didn’t matter all that much as a much improved Aghada would go on to dominate most of the 2nd period. With Tim Hartnett, Jake O’Donoghue and Stephen O’Keeffe in fine form at the back, Aghada would limit Ballincollig to only 2 points in this half, and the visitors wouldn’t score at all after the 7th minute. Upfront Pearse O’Neill was the most effective forward Aghada had, but with the game becoming very stop and start, Aghada never really got fully into their stride. Cian Fleming kept the scoreboard ticking over with frees. Frees mostly won by O’Neill at full forward. Ronan Kennedy did have a nice point from play on 10 minutes after picking up a good Timmy Hartnett clearance. And Fleming also hit a fine score from play as he pointed on the run from out on the left hand sideline.  On 27 minutes a good run from Kennedy set up O’Neill for a point from play and at that stage there was only a point between the sides. Aghada had two chances to draw the game in those closing stages, but Fleming was unable to convert 2 frees from a long way out, and Ballincollig held on for the win. Aghada could feel very unlucky to not have gotten at least a draw, but the visitors could also point to a number of missed frees themselves in that second half.

Huge congratulations to Michael Russell and Cian Fleming who both played for Cork intermediate hurlers when they won their All-Ireland championship after defeating Kilkenny in Nolan Park. Well done also to Ronan Dwane who is manager of the team. Michael had the honour of being the winning captain. And Cian is certainly amassing a nice collection of medals over the last 10 months!.A very proud day for the lads and Aghada, so well done to all.